Taking the Time to be a Dad

I grew up without a father around. I was lucky enough to be raised by a wonderful mother who, like so many heroic single mothers, never allowed my father's absence to be an excuse for me to slack off or not always do my best. But I often wonder what it would have been like if my father had a greater presence in my life.

So as a father of two young girls, I've tried hard to be a good dad. I haven't always been perfect – there have been times when work kept me away from my family too often, and most of the parenting duties fell to Michelle.

I know many other fathers face similar challenges. Whether you're a military dad returning from deployment or a father doing his best to make ends meet for his family in a tough economy, being a parent isn't easy.

That's why my Administration is kicking off the Year of Strong Fathers, Strong Families. We're joining with dads across the country to do something about father absence. And we're taking steps to offer men who want to be good fathers but are facing challenges in their lives a little extra support, while partnering with businesses to offer fun opportunities for fathers to spend time with their kids. For example, the Association of Zoos and Aquariums, Major League Baseball and the WNBA are offering discounts for fathers and their kids, and companies like Groupon and LivingSocial will be featuring special offers for activities fathers can do with their children.

You can learn more and sign the Fatherhood Pledge at Fatherhood.gov: 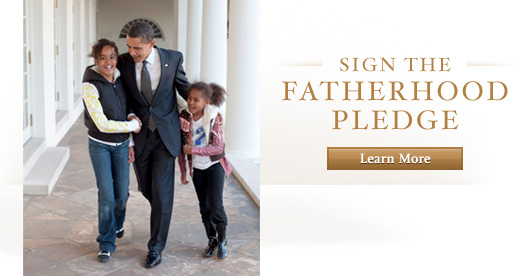 We know that every father has a personal responsibility to do right by their kids – to encourage them to turn off the video games and pick up a book; to teach them the difference between right and wrong; to show them through our own example the value in treating one another as we wish to be treated. And most of all, to play an active and engaged role in their lives.

But all of us have a stake in forging stronger bonds between fathers and their children. All of us can support those who are willing to step up and be father figures to those children growing up without a dad. And that's what the Year of Strong Fathers, Strong Familiesis all about.

So I hope the dads out there will take advantage of some of the opportunities Strong Fathers, Strong Families will offer. It's one way of saying thank you to those who are doing the most important job of all: playing a part in our children's lives.

P.S. Earlier this week, I did a TV interview and wrote an op-ed on this topic. You can see both on WhiteHouse.gov.