All Because of My Son

June 21, 2011 at 11:09 AM ET by George Gordon II
Twitter Facebook Email
Summary:
George Gordon II recounts his journey from becoming a single father to learning to take care of his son and mentoring other young fathers at his church. 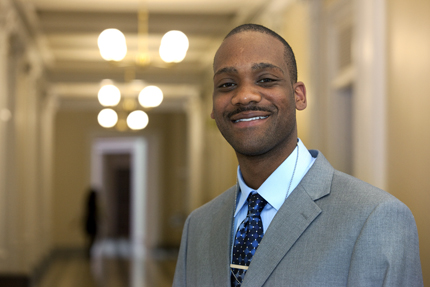 I’m 24 years old and I live with my three-year-old son, George, in the southern suburbs of Chicago. I became a single father at 21 when George was 2 weeks old, and his mother left us. I was so overwhelmed I turned to my own mother for support, and then to organizations like Catholic Charities’ St. Francis de Paula Shelter in Chicago. I followed the program, and last year I applied to and was accepted by Catholic Charities New Hope Apartments Program. Catholic Charities got me an apartment, helped me with counseling, rent expenses and taught me to take care of my home and my son.

They helped me find work in a paper factory. George and I would travel to his babysitter, then I’d go to work second shift. Each day involved long journeys on buses and trains late into the night. I was terrified I might not get another chance at a job, and it kept me going.

My own father wasn’t involved in my life so I know I have to break that cycle and be a rock for George. I feel good about being a positive role model to other young fathers whom I mentor at my church. I also try to be a leader in the Catholic Charities New Hope Apartments program. We have a monthly support group to help each other through this transformation. I hope to show the moms in the group that some fathers really care, and to learn from them how to be both a mother and father to my son.

I want to write my own long-term success story and being recognized as a Champion of Change is part of that story. I have never flown in a plane, let alone been to Washington D.C. I was at the White House, and it’s all because of my son.