June 22, 2011 at 2:06 PM ET by Sue Jamieson
Twitter Facebook Email
Summary:
For the anniversary of the Olmstead decision, Lois Curtis, one of the original plaintiffs in the case, meets with the President and gives him a special gift. The landmark Supreme Court paved the way for Ms. Curtis and others with disabilites to live in the community rather than institutions. 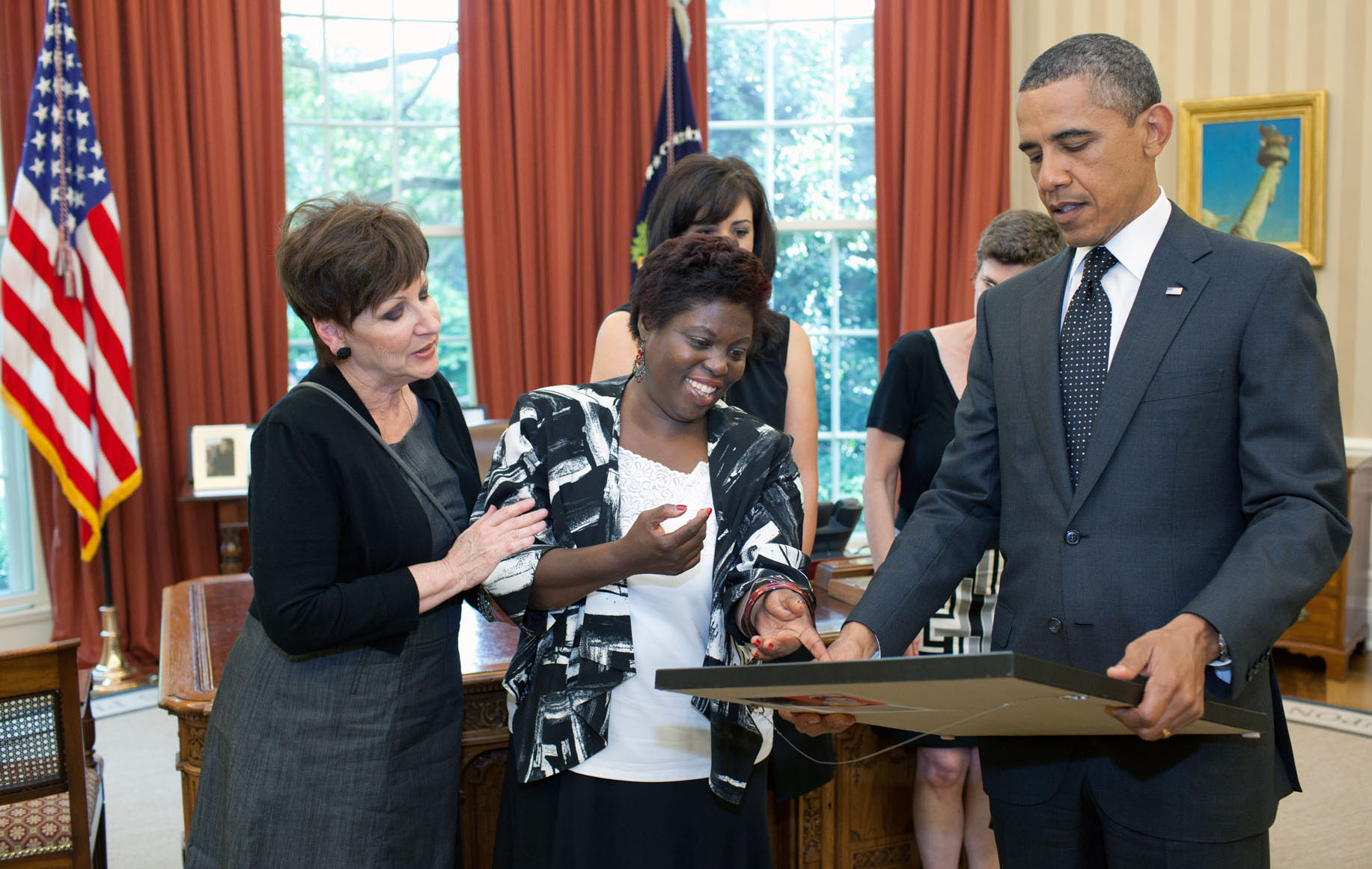 President Barack Obama looks at a painting presented to him by artist Lois Curtis, center, during their meeting in the Oval Office, June 20, 2011. Joining them are, from left, Janet Hill and Jessica Long, from the Georgia Department of Labor, and Lee Sanders, of Briggs and Associates. (Official White House Photo by Pete Souza)

The memories of living in institutional settings since the age of 13 will always be with Lois Curtis even though her life today is beyond what she ever could have imagined when she made the first of many brave phone calls to my office at the Atlanta Legal Aid Society saying, “I want to get out!” The journey (and struggle) from that day includes an historic Supreme Court decision, a home of her own and a successful career as an artist. And now, a meeting with President Barack Obama in the Oval Office as we observe the 12th anniversary of the Olmstead decision.

The Olmstead story began long before the Supreme Court decision. Lois and another plaintiff, Elaine Wilson (who passed away in 2004), were in a state psychiatric hospital in Georgia. They filed suit in 1995 seeking disability services in the community. On the fateful day that brought us to Washington D.C., those of us who had worked on the case for five years were perhaps more amazed than Lois that we were climbing the steps of the United States Supreme Court, moving through hundreds of persons with signs, many in wheelchairs, who had spent most of the previous night in a disability civil rights vigil. The lawyers were focused on the frightening possibility that the Court would reverse the successful decisions of the lower courts and the exciting possibility that it wouldn't. Lois, however, tends to take things in stride and understands the joy of the moment. Since she was not in a state hospital but enjoying a trip to D.C. with her friends and supporters, her focus was on that day of freedom and adventure. In fact, she insisted on a tour of the White House that day, asking if there was a chance she might see the President. Lois and Elaine, as well as the intense commitment of the disability community around the country, were truly our inspiration. And, as we all now know, the U.S. Supreme Court eventually held that the unjustified institutional isolation of people with disabilities is a form of unlawful discrimination under the Americans with Disabilities Act, thus taking a giant step forward for the millions of people with disabilities across the country.

Lois’ story did not end after that landmark Supreme Court decision. In fact, that decision launched a new journey. After living in staffed residential homes since her release from the institution, Lois now rents a beautiful home in the Stone Mountain area of Georgia. She chose a fellow artist and friend to be her roommate. In 2010 a non-profit microboard was created to help foster Lois' continuing independence. A microboard is a group of friends set up to assist with the services and supports for one individual. In her case, Lois' microboard was critical to helping her gain access to a Medicaid waiver program for self-directed services.

Lois’ career as an artist has taken off. Initial support from a U.S. Department of Labor customized employment grant in 2004 drew advocates to her side that resulted in several one-woman exhibits and recognition within the arts community for her uninhibited artistic expression. One painting was recently auctioned for $1,400! But Lois doesn’t care about that. When I asked her what her artwork means to her, she responded, “My art been around a long time. I came along when my art came along. Drawing pretty pictures is a way to meet God in the world like it is.”

Lois is once again taking the lead and helping those who choose to integrate into the community. She wants to show parents and family members that with the right supports and services, life in the community is not only possible but can also be very rewarding. The Obama Administration is helping to make this possible by strongly supporting the full implementation of the Olmstead decision, helping ensure the full integration of people with disabilities into the work, recreational, and social life of our society.

On June 20, 2011, 12 years after her visit to the Supreme Court, Lois has not only seen the President but presented him with a gift of one of her original paintings in the Oval Office, in the style of a visiting dignitary. The "Girl in Orange Dress" is one in a series of three pastel self portraits Lois created since she has no photographs to mark her childhood.

Sue Jamieson is an attorney with the Atlanta Legal Aid Society Mental Health and Disability Rights Unit. She was the lead attorney in Olmstead v. L.C.