In Soweto with First Lady Michelle Obama: A Day of Memory, Inspiration, Friendship

The First Lady and her family spent Wednesday, June 22 in Soweto, Johannesburg -- the sprawling South African township of over a million, once home to such giants as Nelson Mandela and Desmond Tutu and scene of so many dramatic events of the struggle against apartheid -- including those that occurred at Regina Mundi church, where the First Lady gave the keynote address at the US-sponsored Young African Womens Leaders Forum. Regina Mundi, like Soweto itself, was the beating heart of the anti-apartheid movement, a place where those involved in the struggle gathered to find faith, build support and makes plans to free their country. On June 16, 1976, 35 years ago this month, as Soweto's youth came together to demonstrate against apartheid laws, police opened fire, killing some, wounding others, and leaving bullet holes in the walls of sacred Regina Mundi, where a group of students sought refuge. That day, now called Youth Day in South Africa, galvanized the anti-apartheid movement and international awareness of the struggle.

You could feel the force of history inside Regina Mundi as the First Lady shared the story of Soweto's place in that history in her address to 76 young african women leaders from 25 countries attending the forum and an estimated 2000 audience members- young and old-from the churchs' congregation, the Soweto community, and greater Johannesburg. The First Lady was introduced by two remarkable women leaders, Baleka Mbete, the former Deputy President of South Africa and now the national chair of the African National Congress, and Graca Machel, the preeminent global advocate for the rights of women and children, the former first lady of Mozambique, and the wife of former President Mandela. Mrs. Obama took the stage to the sounds of warm cheers and the extraordinary songs of the Regina Mundi church choir. She delivered a powerful address,  speaking directly to the young leaders in the church, and the young leaders of Africa, the United States, and around the world. She challenged young people to pick up the mantle from the lions of the struggle, including Mandela, Albertina and Walter Sisulu, and lead the freedom generation of today to meet the world's shared challenges -- HIV/AIDS, education, and violence against women. She recognized the young african women leaders there who have already taken up this call to action, and ended by telling young people that if anyone tried to say they cannot achieve their dreams that they should respond, with one voice, the voice of a generation -- yes we can! 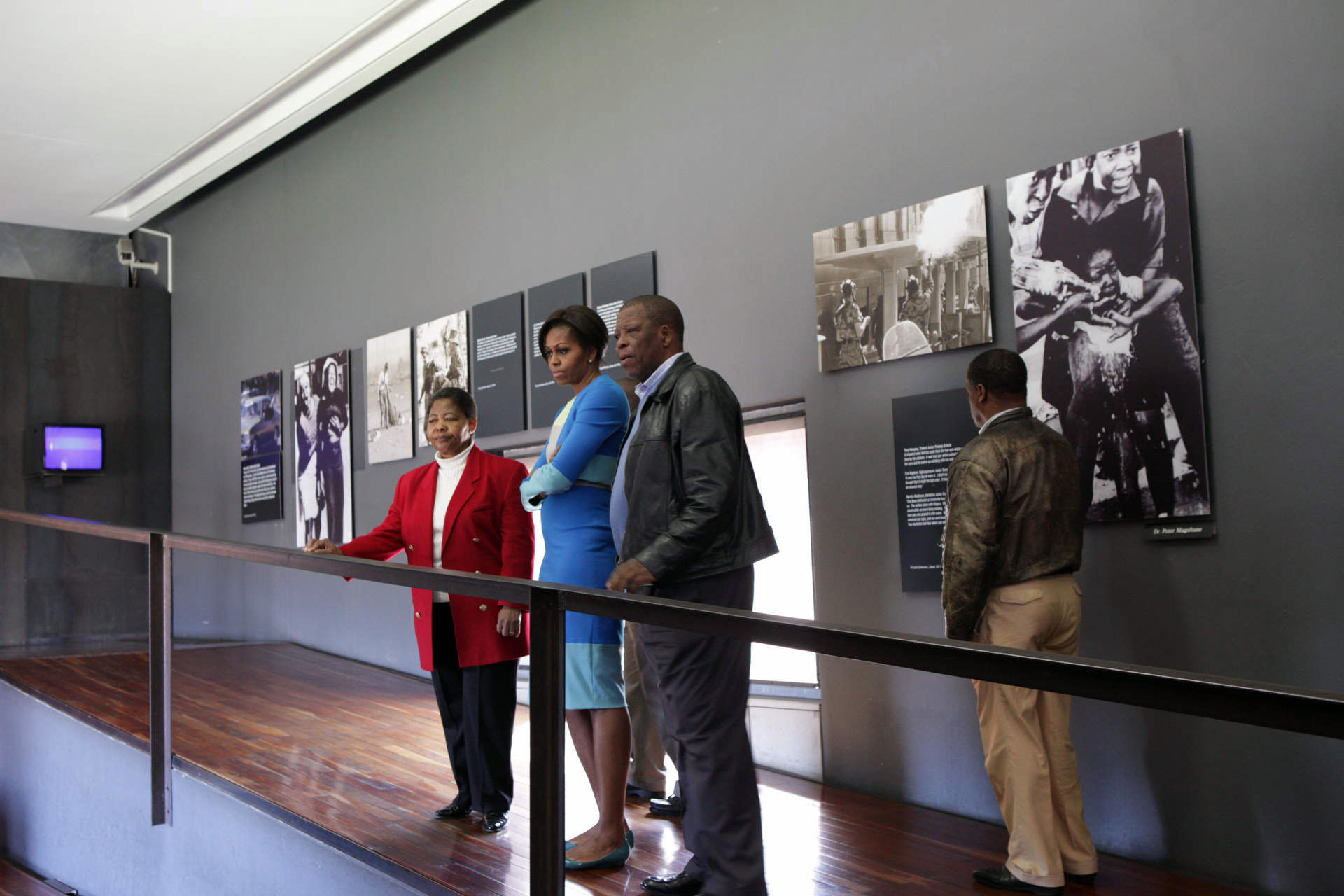 From Regina Mundi the First Lady traveled to another historic crossroad in Soweto - the Hector Pieterson memorial, where she paid her respects to the young boy who was among the first of many who died at the hands of apartheid police during the June 16, 1976 student uprisings. The courage of Hector and the many other youth who risked - and gave- their lives in the march for freedom underscored her message about the change, leadership and potential of every young person, no matter their station in life or their age. Along the way to the memorial, the children of Soweto could be seen singing and waving signs reading "We love you Mrs. Obama."

The First Lady then had the opportunity to hear firsthand from the young women forum participants. She attended two breakout sessions held at the Rosa Parks library in Soweto, a reading room sponsored by the US embassy where she joined conversations about such topics as education, women's entrepreneurship, and wellness. She then ended the day by doing a service project with the third breakout group at the Nanga Vhutshilo Choose Life community center.  This center, founded by the remarkable Sibongile Mazibuko after her own son contracted HIV, provides food and essential services to more than 100 families and 230 children in need -- including many who are HIV positive or who have lost one or both parents due to AIDS. In addition to a soup kitchen, clinic, library and homework support, the center has a community garden. The First Lady joined with forum participants and Peace Corps members to put their gardening skills to work harvesting and planting vegetables. The First Lady and her family were then serenaded by the children of the center, who embraced them, sending them on their way to Cape Town where we will spend our third day. 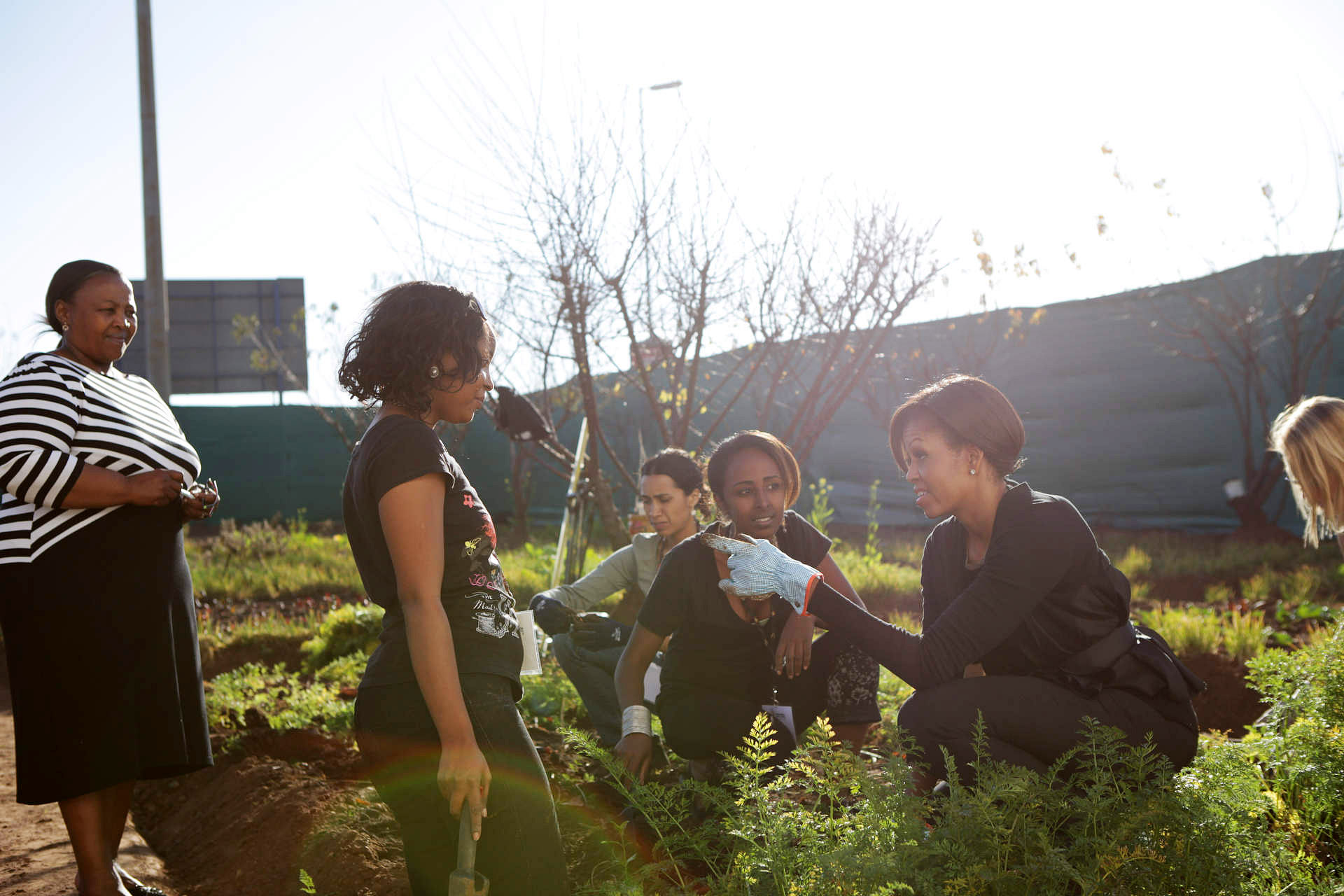 It was a day of memory, of inspiration, of triumph over adversity, of warmth, love and friendship that extends around the world.

Tina Tchen is Assistant to the President, Chief of Staff to the First Lady and Executive Director of the White House Council on Women and Girls