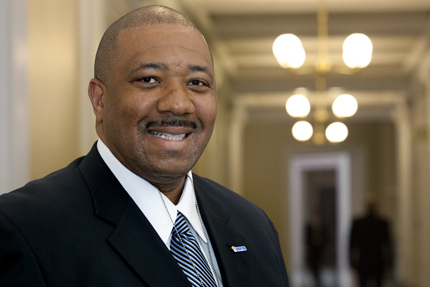 My upbringing was an interesting one, because the father figures in my life have all cared for me through critical stages of development. At the age of fourteen, my life completely changed. My mom became a single mother of six, who worked 10-hour days while attending college. During this time, I found myself taking on large amounts of responsibility, as I was the oldest sibling. In hopes of resolving internal issues of abandonment, I found my biological father and moved in with him at the age of seventeen. The next five years were some of the best and most poignant years of my life. I was not only able to build self confidence, but also was able to foster a new relationship with my dad that allowed me to gain a greater understanding of the man I was trying to become. It is because of these experiences that I have always given the role of Father and Provider the highest priority.

The youth of our communities across the country are faced with increasingly poor attendance at school, marginal academic achievement, low probability of high school graduation, involvement in gang-related activities, low self-esteem, substance abuse, negative involvement with law enforcement and general lack of positive guidance. Statistics from the National Cares Mentoring Movement show that only 18% of Black boys graduate from high school; 57% of Black fourth graders are functionally illiterate; 2.4 million Black children have a parent in prison; and, homicide is the leading cause of death of young Black men with more than 1,000 Black teenagers arrested every day. This is the type of compelling evidence that fuels my passion for serving our youth.

My work with Year Up Atlanta, allows me to provide a level high support and high expectations for the urban young adults aged 18-24. We recognize that both job skills, technical and professional, and higher education are necessary to provide a viable path to economic self-sufficiency. Our mission is to close the Opportunity Divide by providing urban young adults with the skills, experience, and support that will empower them to reach their potential through professional careers and higher education. This will be a crucial element in support of President Obama’s plan to “out-innovate, out-educate and out-build the rest of the world.” In addition to this work, my involvement on the steering committee of Atlanta CARES, an affiliate of the National CARES Mentoring Movement (NCMM), has allowed me to be a part of the solution. NCMM's mission is to create a highly visible and effective national mentoring campaign targeting the Black community.

But this mission is also a personal one. I have mentored a young male for the past 3 years. We met at our church through a common interest basketball. We struck an immediate bond, even though my mentee was born and raised in a tough part of Miami, Florida and me in the mean streets of New York City. I had a specific goal for him to expand his mind beyond basketball and to show him that he did not have to follow the path of his father, which was to prison. In high school, he maintained a 3.8 grade point average and served as the Captain of the basketball team and has earned an athletic basketball scholarship to Colgate University in Hamilton, NY. I have told him, I will always be there for you through the great and difficult times! Our youth are our today and we must be part of their lives which is the only solution.

Jonathan Mayo is the Internship Coordinator for Year Up Atlanta.