June 24, 2011 at 4:05 PM ET by Lori Garver
Twitter Facebook Email
Summary:
Engineers at NASA's Langley Research Center have developed the Electron Beam Freeform Fabrication, or EBF3. The EBF3 is a process that uses an electron beam gun, a dual wire feed and computer controls to manufacture metallic structures for building parts or tools in hours, rather than days or weeks.

Crossposted from the NASA blog.

NASA has always been on the cutting edge of innovation, investing time, energy and resources into the technologies of tomorrow. Technologies that can be spun-off into the private sector to help create jobs and improve the quality of life of all Americans.

With funding from NASA's Aeronautics division, engineers at NASA¹s Langley Research Center have developed a manufacturing process that has turned science fiction into science fact. The Electron Beam Freeform Fabrication, or EBF3, is a process that uses an electron beam gun, a dual wire feed and computer controls to manufacture metallic structures for building parts or tools in hours, rather than days or weeks. 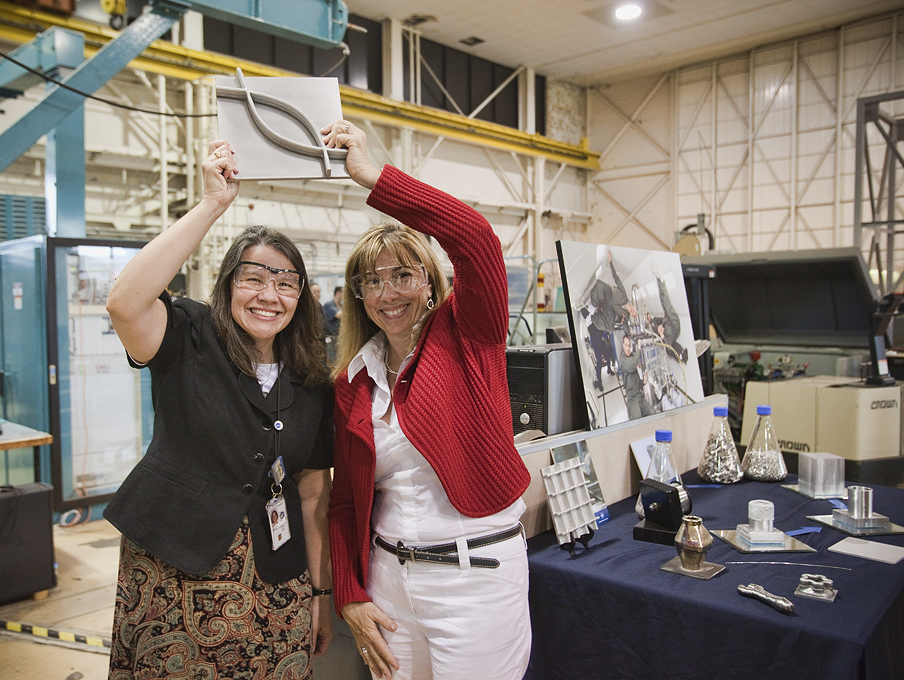 NASA Deputy Administrator Lori Garver and Karen Taminger, the lead engineer on the Electron Beam Freeform Fabrication, or EBF3 project visiting a NASA field center holding an aircraft part made by the EBF3 during a demonstration. (Photo by NASA/Sean Smith)

The EBF3 is being used to manufacture titanium spars for vertical tails of the F-35 Joint Fight Striker. Less wasted titanium and reduced machining times result in a savings for Lockheed Martin, and ultimately the American taxpayer.

In fact, most of the interest in the technology is coming from the aerospace industry because of the EBF3's capability to tailor the manufacturing of critical aviation components to help improve the performance of aircraft.

The EBF3 can manufacture complex shapes in a single operation, uses less power, and is safer for the workers operating it. The computer-driven process leaves behind no wasted material. It can also resurface a design with a harder material, making it more cost-efficient as well as lighter. For the aviation industry, lighter means less fuel is needed in flight.

As the technology is introduced, applications for new industries are evolving. For example, Virginia manufacturers have expressed interest in the technology and General Motors is exploring it to build tools for automobile manufacturing.

For NASA, the EBF3 is being tested as a sort of remote machine shop for future space missions. We have flown the EBF3 on planes that simulate microgravity, testing how the EBF3 would work in space. This manufacturing technology could be valuable for future long-duration deep space missions, where tools and parts could be manufactured on site, eliminating the need to pack spares or send out resupply missions.

This kind of pioneering technology holds so much promise and potential for the future. These are the game-changing innovations that set America apart from her competitors around the world – and lead to the creation of manufacturing jobs. We are retooling industry for a new age, and ensuring that Americans are inventing and building the new things that the world needs.

American builders and doers – like NASA engineers and scientists – imagine a better future for us all, and help build the tools to get us there.