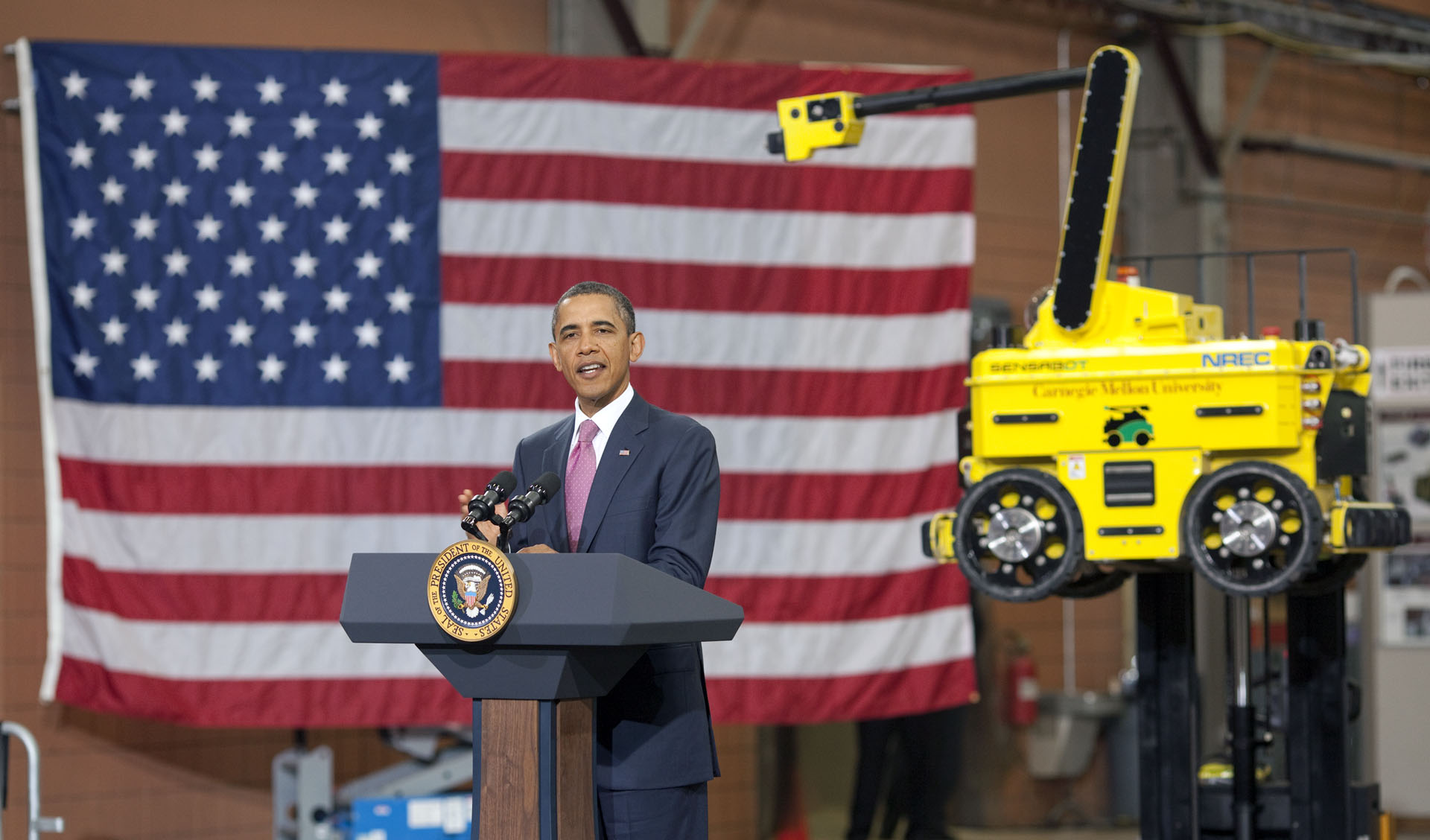 President Barack Obama delivers remarks following a tour of the National Robotics Engineering Center at Carnegie Mellon University in Pittsburgh, Pa., June 24, 2011. The President spoke on the need to focus on cross-cutting technologies that will enhance the global competitiveness of U.S. manufacturing and speed up ideas from the drawing board to the manufacturing floor. (Official White House Photo by Pete Souza)

In his remarks he announced the launch of the Advanced Manufacturing Partnership (AMP), a national effort that brings together industry, universities and the federal government to invest in emerging technologies that will create high quality manufacturing jobs and enhance our global competitiveness.

We’ve launched an all-hands-on-deck effort between our brightest academic minds, some of our boldest business leaders, and our most dedicated public servants from science and technology agencies, all with one big goal, and that is a renaissance of American manufacturing.

Throughout our history, our greatest breakthroughs have often come from partnerships just like this one.  American innovation has always been sparked by individual scientists and entrepreneurs, often at universities like Carnegie Mellon or Georgia Tech or Berkeley or Stanford.  But a lot of companies don’t invest in early ideas because it won’t pay off right away. And that’s where government can step in.  That’s how we ended up with some of the world-changing innovations that fueled our growth and prosperity and created countless jobs -- the mobile phone, the Internet, GPS, more than 150 drugs and vaccines over the last 40 years was all because we were able to, in strategic ways, bring people together and make some critical investments.

The AMP was developed based on the recommendation of the President’s Council of Advisors on Science and Technology (PCAST), which released a report today entitled “Ensuring Leadership in Advanced Manufacturing.”  The AMP will be led by Andrew Liveris, Chairman, President, and CEO of Dow Chemical, and Susan Hockfield, President of the Massachusetts Institute of Technology.

The President’s plan, which leverages existing programs and proposals, will invest more than $500 million to jumpstart this effort.  These investments will build domestic manufacturing capabilities in critical national security industries and reduce the time needed to make advanced materials used in manufacturing products.  Additionally, we will invest in next-generation robotics, increase energy-efficiency in the manufacturing process and develop new technologies that will dramatically reduce the time required to design, build, and test manufactured goods.

The President stressed that leading universities and companies will compliment these federal efforts by working together to invent, deploy and scale the cutting-edge technologies that will create new jobs, spark new breakthroughs, and reinvigorate American manufacturing today and in the future:

This new partnership that we’ve created will make sure tomorrow’s breakthroughs are American breakthroughs.  We’re teaming up to foster the kind of collaborative R&D that resulted in those same early discoveries, and to create the kind of innovation infrastructure necessary to get ideas from the drawing board to the manufacturing floor to the market more rapidly –- all of which will make our businesses more competitive and create new, high-quality manufacturing jobs.

Now, we’ve made some tough decisions that have turned our economy in a positive direction over the past two years.  We’ve created more than 2 million new jobs in the private sector over the past 15 months alone, including almost 250,000 in manufacturing.  But we still have to confront those underlying problems.  They weren’t caused overnight, and we won’t solve them overnight.  But we will solve them.  And we’re starting to solve them right here in Pittsburgh, and right here at Carnegie Mellon.

Imagine if America was first to develop and mass-produce a new treatment that kills cancer cells but leaves healthy ones untouched; or solar cells you can brush onto a house for the same cost as paint; or flexible display soldiers -- flexible displays that soldiers can wear on their arms; or a car that drives itself.  Imagine how many workers and businesses and consumers would prosper from those breakthroughs.

Those things aren’t science fiction –- they’re real.  They’re being developed and deployed in labs and factories and on test tracks right now.  They sprang from the imagination of students and scientists and entrepreneurs like all of you.  And the purpose of this partnership is to prove that the United States of America has your back, is going to be supporting you -- because that’s the kind of adventurous, pioneering spirit that we need right now.

That’s the spirit that’s given us the tools and toughness to overcome every obstacle and adapt to every circumstance.  And if we remember that spirit, if we combine our creativity, our innovation, and our optimism, if we come together in common cause, as we've done so many times before, then we will thrive again.  We will get to where we need to be.  And we will make this century the American century just like the last one was.