June 27, 2011 at 3:40 PM ET by Howard Schmidt
Twitter Facebook Email
Summary:
Cybersecurity Coordinator Howard Schmidt announces the winners of the Stop.Think.Connect. Campaign’s Public Service Announcement Challenge which called on the public to create short videos encouraging their fellow citizens to be safe and secure online. Check out the winning PSAs.

Today, Secretary of Homeland Security Janet Napolitano, Commerce Secretary Gary Locke, and I had the honor of announcing the winners of the Stop.Think.Connect. Campaign’s Public Service Announcement (PSA) Challenge at the White House.  The event was streamed live on WhiteHouse.gov and you can view it here starting this evening.

I had the pleasure of launching the PSA Challenge in November 2010 as part of the National Initiative for Cybersecurity Education (NICE) – I asked Americans to create and submit short video PSAs encouraging their fellow citizens to be safe and secure online.  I was struck by the many impressive video entries submitted by PSA Challenge participants across the country.  The winning videos were the most successful at advancing the Stop.Think.Connect. message through their creativity and originality.  They target a variety of age groups and promote awareness about important cybersecurity issues critical to America’s national and economic security, as well as the safety and security of individuals and communities.  These PSAs superbly demonstrate the important responsibility all Americans share to protect cyberspace.  Congratulations to the winners! 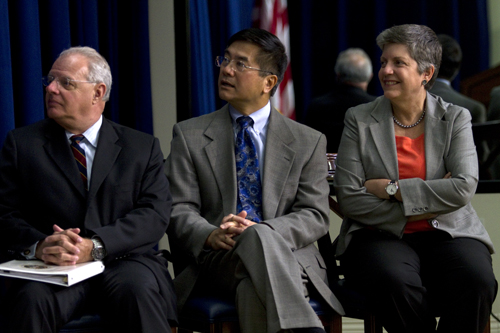 Today’s event highlights the importance of government, the private sector, non-profit organizations, academia, and the American public coming together to realize the vision set out by President Obama when he called on us to “begin a national campaign to promote cybersecurity awareness and digital literacy from our boardrooms to our classrooms, and to build a digital workforce for the 21st century.”  I commend the PSA Challenge winners for their creativity and enthusiasm, and thank all who participated in the Challenge for helping to remind Americans that cybersecurity starts with them.

Watch the winning PSAs below: