President Obama on the Debt Limit: "Now is the Time to Go Ahead and Make the Tough Choices"

June 29, 2011 at 6:19 PM ET by Jesse Lee
Twitter Facebook Email
Summary:
The President took questions the press corps, but his primary argument was on the economy, the deficits, and the consequences of Congress not acting on the debt limit.

In his press conference this morning, the President took questions on anything the White House press corps could think of, but his primary argument was on the economy, the deficits, and the consequences of Congress not acting and allowing America to default on its debt.  He made clear that while he continues to work on everything from streamlining regulations to getting capital to small business, there are things Congress can do right now to grow the economy and create jobs – including putting construction workers back to work rebuilding our country, passing into law trade agreements that will increase exports and create jobs and coming to an agreement to reduce the deficit. As he explained, reducing our deficits has to be done in a fair and balanced way, and that means those in Congress who are looking only at cutting core priorities like education and medical research and cutting Medicare benefits for seniors while excluding even the most egregious tax loopholes for special interests and the very wealthiest Americans need to come to the table:

On Closing Tax Loopholes for Millionaires and Billionaires:

There’s been a lot of discussion about revenues and raising taxes in recent weeks, so I want to be clear about what we’re proposing here.  I spent the last two years cutting taxes for ordinary Americans, and I want to extend those middle-class tax cuts.  The tax cuts I’m proposing we get rid of are tax breaks for millionaires and billionaires; tax breaks for oil companies and hedge fund managers and corporate jet owners.

So the bottom line is this:  Any agreement to reduce our deficit is going to require tough decisions and balanced solutions.  And before we ask our seniors to pay more for health care, before we cut our children’s education, before we sacrifice our commitment to the research and innovation that will help create more jobs in the economy, I think it’s only fair to ask an oil company or a corporate jet owner that has done so well to give up a tax break that no other business enjoys.  I don’t think that’s real radical.  I think the majority of Americans agree with that.

By August 2nd, we run out of tools to make sure that all our bills are paid.  So that is a hard deadline.  And I want everybody to understand that this is a jobs issue.  This is not an abstraction.  If the United States government, for the first time, cannot pay its bills, if it defaults, then the consequences for the U.S. economy will be significant and unpredictable.  And that is not a good thing.

We don’t know how capital markets will react.  But if capital markets suddenly decide, you know what, the U.S. government doesn’t pay its bills, so we’re going to start pulling our money out, and the U.S. Treasury has to start to raise interest rates in order to attract more money to pay off our bills, that means higher interest rates for businesses; that means higher interest rates for consumers.  So all the headwinds that we’re already experiencing in terms of the recovery will get worse.

That’s not my opinion.  I think that’s a consensus opinion.  And that means that job growth will be further stymied, it will be further hampered, as a consequence of that decision.  So that’s point number one.

Point number two, I want to address what I’ve been hearing from some quarters, which is, well, maybe this debt limit thing is not really that serious; we can just pay interest on the debt.  This idea has been floating around in some Republican circles.

Moreover, which bills are we going to decide to pay?  These guys have said, well, maybe we just pay the interest on -- for bondholders.  So are we really going to start paying interest to Chinese who hold treasuries and we’re not going to pay folks their Social Security checks?  Or we’re not going to pay to veterans for their disability checks?  I mean, which bills, which obligations, are we going to say we don’t have to pay?

And last point I want to make about this.  These are bills that Congress ran up.  The money has been spent.  The obligations have been made.  So this isn’t a situation -- I think the American people have to understand this -- this is not a situation where Congress is going to say, okay, we won’t -- we won’t buy this car or we won’t take this vacation.  They took the vacation.  They bought the car.  And now they’re saying maybe we don’t have to pay, or we don’t have to pay as fast as we said we were going to, or -- that’s not how responsible families act.  And we’re the greatest nation on Earth, and we can’t act that way.

On the Need for Congress to Act:

And, you know, Malia and Sasha generally finish their homework a day ahead of time.  Malia is 13, Sasha is 10...They don’t wait until the night before.  They’re not pulling all-nighters.  They’re 13 and 10.  Congress can do the same thing.  If you know you’ve got to do something, just do it.

And I’ve got to say, I’m very amused when I start hearing comments about, well, the President needs to show more leadership on this.  Let me tell you something.  Right after we finished dealing with the government shutdown, averting a government shutdown, I called the leaders here together.  I said we’ve got to get done -- get this done.  I put Vice President Biden in charge of a process -- that, by the way, has made real progress -- but these guys have met, worked through all of these issues.  I met with every single caucus for an hour to an hour and a half each -- Republican senators, Democratic senators; Republican House, Democratic House.  I’ve met with the leaders multiple times.  At a certain point, they need to do their job.

And so, this thing, which is just not on the level, where we have meetings and discussions, and we’re working through process, and when they decide they’re not happy with the fact that at some point you’ve got to make a choice, they just all step back and say, well, you know, the President needs to get this done -- they need to do their job.

Now is the time to go ahead and make the tough choices.  That’s why they’re called leaders.  And I’ve already shown that I’m willing to make some decisions that are very tough and will give my base of voters further reason to give me a hard time.  But it’s got to be done.

And so there’s no point in procrastinating.  There’s no point in putting it off.  We’ve got to get this done.  And if by the end of this week, we have not seen substantial progress, then I think members of Congress need to understand we are going to start having to cancel things and stay here until we get it done.

They're in one week, they're out one week.  And then they're saying, Obama has got to step in.  You need to be here.  I’ve been here.  I’ve been doing Afghanistan and bin Laden and the Greek crisis.  You stay here.  Let’s get it done.

On Putting the Economy Ahead of Politics:

You know, every day I get letters from folks all around the country who show incredible resilience, incredible determination, but they are having a very, very tough time.  They’re losing their homes.  Some have lost their businesses.  Some have lost work and have not been able to find jobs for months, maybe a year, maybe a year and a half.  And they feel some desperation.  And some folks who are working just are having a tough time paying the bills because they haven’t seen their wages or incomes go up in 10 years, and the costs of everything else have gone up.

I was in Alcoa, in Iowa, one of our most successful companies.  They took a big hit during the recession, but they still invested $90 million in new equipment in a plant that makes airplane wings and parts for automobiles.  And they’ve bounced back.  They’ve hired back all their people and are increasing market share because they made those investments.

Well, just like a company like Alcoa, America has got to make some investments.  We know that we’ve got to get control of our deficit.  There are some things that aren’t going to solve all our problems but can make progress right now.  And the question is whether or not Democrats and Republicans are willing to put aside the expedience of short-term politics in order to get it done.

And these folks are counting on us.  They desperately want to believe that their leadership is thinking about them and not playing games.  And I think that if all the leadership here in Washington has the faces and the stories of those families in mind, then we will solve this debt limit issue; we will put in place steps like a payroll tax cut and infrastructure development; we’ll continue to fund education; we’ll hold true to our commitment to our seniors.

These are solvable problems, but it does require us just getting out of the short-term and, frankly, selfish approach that sometimes politics breeds.  We’ve got to think a bit long term. 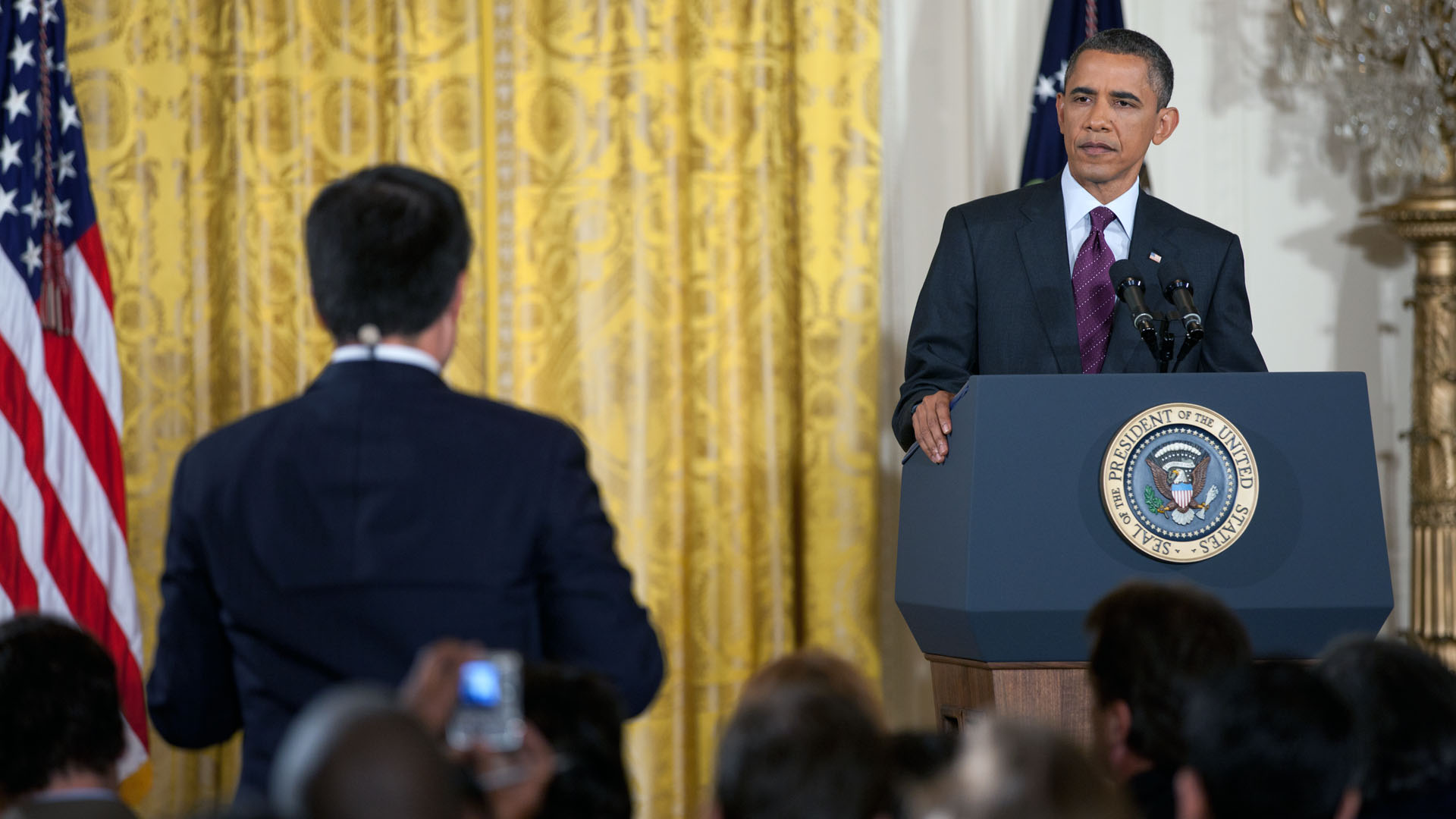 President Barack Obama listens to a question during a press conference in the East Room of the White House, June 29, 2011. (Official White House Photo by Lawrence Jackson)