Service Members Connected by the "Sea of Goodwill"

July 5, 2011 at 11:55 AM ET by Justin Constantine
Twitter Facebook Email
Summary:
Justin Constantine, a Marine Corps veteran who works with the FBI, Cause, and the Wounded Warrior Project, believes that it is in local communities that civilians can make the biggest impact for veterans. 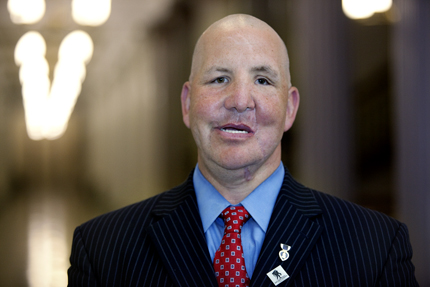 In 2006, and while still a Marine Captain, I volunteered to deploy to Iraq as a Civil Affairs Team Leader. Fortunately for me, most of my Marines had already deployed to Iraq, and my non-commissioned officers were all razor-sharp. We fell in with Third Battalion, Second Marines, a Marine infantry battalion headquartered at Habbaniyah, which is halfway between Ramadi and Fallujah. That was a very kinetic time period in Al-Anbar Province, with daily IED explosions, troops in contact and protracted firefights. Six weeks into my deployment I was shot in the head by an enemy sniper, but thanks to the courage and skills of Navy Corpsman George Grant, I am still here today.

Five years later I am finally close to the last of my reconstructive surgeries, and along the way have in a variety of ways endeavored to help other wounded warriors and their caregivers and family members.  Most recently, I was very excited to be nominated by the Obama Administration as a Champion of Change, and to participate in a roundtable discussion with other wounded warriors and advocates to help identify ways that local communities can affect change with our new veterans, especially in the fields of education, employment and health care.

Although our focus group was small in number, we came from a variety of experiences, backgrounds and perspectives, ranging from the Vietnam veteran who has dedicated the last 40 years of his life to promoting veteran-owned small businesses to the young vet from Operation Iraqi Freedom who is now blind but running his own company, and in whose name the University of Pittsburgh is about to name their newest endowment. That being said, we all agreed that there are far too many veterans from all eras who are homeless, unemployed and/or not receiving the valuable information provided by the Department of Veterans Affairs and the Department of Defense.

Just as Chairman of the Joint Chiefs of Staff Admiral Michael Mullen has often talked about the “Sea of Goodwill” across America, referring to communities stepping up to meet the needs of service members and their families, our group focused on the fact that veterans groups need to work closely with local communities to ensure they are reaching the greatest number possible. This is especially true for those returning warriors who bear the invisible scars of war, such as post traumatic stress disorder (PTSD) or traumatic brain injury (TBI); they are not as readily identifiable to the naked eye as our warriors with physical injuries, but are often struggling greatly with significant mental health issues. I can personally attest to the difficulties, embarrassment and frustration of night terrors, flashbacks and unnerving memories. Unfortunately, a stigma still exists within our society, as well as within the military, regarding those issues.

This Administration has taken great strides to improve services for our nation’s veterans, from the powerful Post 9/11 GI Bill to the advanced appropriations for the Department of Veterans Affairs to modernizing medical record systems. But the federal government cannot provide all the answers, and thus our state and local governments need to work closely with the myriad veterans groups that are doing great things every day for our returning heroes. As our group discussed, part of that is utilizing various social networking tools to educate those in need, especially in rural areas, about the excellent programs, benefits and resources that currently exist.

Over the last five years, and particularly through our T-Shirts For Troops Campaign that I host at Iraq and Back, my wife and I have learned that regardless of political affiliation, Americans across the country truly want to support and take care of our service members and veterans. Through our Campaign, people across America have purchased over 2,000 patriotic tee shirts to donate to wounded warriors and their family members; this shows our returning heroes that communities throughout the country support them and their sacrifices. I believe that it is in these local communities where civilians can make the biggest impact for our warriors; the challenge is on the veterans groups to leverage modern technology and this broad desire to help to ensure that all of our service members are connected with the “Sea of Goodwill” that stretches from community to community.