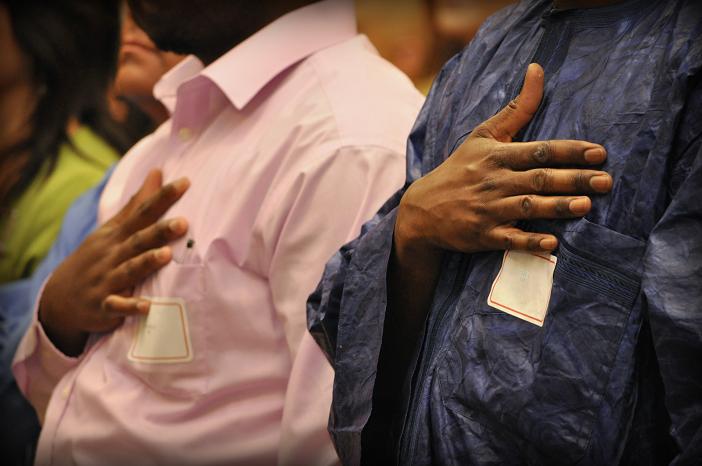 Naturalization candidates recite the Pledge of Allegiance during a ceremony in Cincinnati, July 1, 2011. (Photo by Office of Mayor Mark Mallory).

In the week leading up to the 4th of July, United States Citizenship and Immigration Services held nearly 350 naturalization ceremonies across the country, welcoming over 24,000 new citizens to the United States.

Last week, Cincinnati hosted the 2011 League of United Latin American Citizens (LULAC) National Convention and Exposition.  As part of that great event, I witnessed 93 individuals become citizens of our nation.  I was honored to be there.

It was incredible to watch people, not born in the United States, actively choosing to become Americans.  I was reminded of the greatness of our nation.  Many of us are fortunate to be American citizens by birth.  However, when we became citizens, there was no official ceremony.  There was no color guard, no judge, no U.S. Senator, no pomp and circumstance.  But when someone chooses to go through the hard work of becoming an American citizen, it is worthy of celebration.

The new citizens came from 43 countries ranging from Brazil and China to Ethiopia, Morocco, and Senegal.  The diversity, the culture, and the perspective that each new citizen brings to our community continually strengthens our cities and our nation

The action of becoming a citizen shows character and commitment.  It speaks to who these individuals are and where they place their values.  Of course, with citizenship comes not only new privileges, but also new responsibilities.  I reminded our new community members of the importance of voting, and I was encouraged to see many already filling out voter registration forms at the event.

The ceremony, presided over by the Honorable Judge S. Arthur Spiegel, also included the Director of United States Citizenship and Immigration Services, Alejandro Mayorkas – himself an immigrant, Senator Rob Portman, and LULAC President Margaret Moran. I was glad to hear President Moran raise the issue of comprehensive immigration reform.  I honor and respect her leadership working toward that significant issue.

I will remember this day as a great day in Cincinnati.

Learn more about naturalization ceremonies and the citizenship process at the USCIS Citizenship Resource Center.