July 7, 2011 at 1:33 PM ET by Jeffrey Zients
Twitter Facebook Email
Summary:
With more than one out of every six dollars of Federal government spending going to contractors, increasing accountability and saving money in contracting is critical to creating a Federal government that is efficient and effective.

With more than one out of every six dollars of Federal government spending going to contractors, increasing accountability and saving money in contracting is critical to creating a Federal government that is efficient and effective. Last month, President Obama and Vice President Biden launched the Campaign to Cut Waste and issued a new Executive Order on Delivering an Efficient, Effective, and Accountable Government to hunt down misspent tax dollars across the Administration.

As part of the Campaign to Cut Waste, today, we are announcing that all agencies must cut spending for management support service contracts by 15 percent.  Instead of paying $40 billion for these services, as agencies did in FY 2010, they will reduce spending to $34 billion a year by the end of FY 2012 – a reduction of $6 billion.

During the last Administration, spending on contracting skyrocketed at an unsustainable pace while oversight staff remained flat.  The result, in too many cases, was waste, fraud, and abuse.  The Obama Administration is committed to cracking down on this waste and strengthening accountability, and the results are clear. 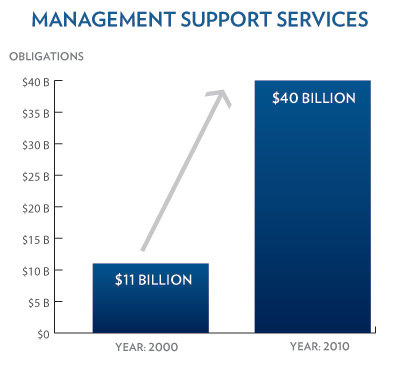 Last year, contracting decreased for the first time in 13 years. In fact, agencies spent nearly $80 billion less than they would have spent had contract spending continued to grow at the same rate it had under the prior Administration.

To build on this progress, we are now focusing on spending on contracts for management support services, which has grown even faster than for contracting in general.  Spending on these services approximately quadrupled between FY 2000 and FY 2010.  Management support services include acquisition planning, information technology systems development, and program management.  In the worst cases in this area, we sometimes see contractors managing contractors.

To meet our $6 billion reduction goal, agencies will buy smarter and buy less. They will still look to contractors for a wide range of professional and technical needs, but in a more prudent, cost-effective manner.  They will analyze their spending patterns and buy only what they can afford. They will seek out contractors with good past performance and end relationships with firms who are proven bad actors. They will also keep a watchful eye out for situations where reliance on a contractor’s expertise has gone beyond what is appropriate for the agency to maintain control of its mission and operations.

Saving money on management support services is just one of a number of concerted efforts the Administration is taking to reduce waste in contracting.  Read more about our ongoing initiatives to achieve better results here and our broader work to cut waste and make government work better for the American people here.