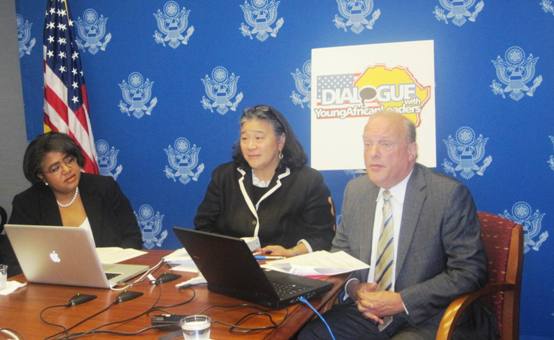 Two weeks ago, First Lady Michelle Obama delivered the keynote address to a U.S.-sponsored Young African Women Leaders Forum in South Africa.  Forum participants include young women from across sub-Saharan Africa who were leading or involved in social and economic initiatives in their own countries. The Forum was a continuation of the Obama Administration’s ongoing engagement with the next generation of African leaders and the momentum of the August 2010 President’s Forum with Young African Leaders held at the White House.

Last week, as a follow-up to the First Lady’s Forum, Jocelyn Frye, the First Lady’s Policy Director, and I participated in a global webchat discussion hosted by the U.S. State Department that connected youth in Africa to youth in the United States.  Edward Kemp, Acting Director for Public Diplomacy and Public Affairs in the Bureau of African Affairs, moderated the discussion. Participants from the First Lady’s Forum joined the conversation from Embassy Gaborone and Embassy Nairobi via a video connection. This digital global dialogue linked youth leaders in South Africa, Lesotho, Uganda, and Namibia to grass roots US-based youth organizations, universities, non-governmental and women’s empowerment organizations, such as Girl Up, DAWN, the Africa Society, and She’s the First.  The power of social media kicked into full gear as many online participants tuned in and tweeted, “ We  are  agents of change” to  “We are happy to hear about the connection between men and women and both their roles in the education of women in the community!”

Youth leaders raised key issues on the video chat that were popular topics during the First Lady’s forum that include: empowering women through education, mentorship and entrepreneurship.  In response to a question about how women can advance through entrepreneurship, I noted how women owned businesses are an engine of growth domestically, but the global challenge is providing access to capital and expanding revenues that are statistically very small. There is a great need for more collaborative efforts and international partnerships to provide business development and leadership training to women, men and youth leaders across all socioeconomic backgrounds. The conversations continued as two young women in Nairobi described how they launched a scholarship program for women at Mogadishu University in Somalia to conduct seminars on the importance of sanitation and a clean environment.

The webchat also highlighted the positive influences of the role of women in radio, but also demonstrated the challenges women face globally, fighting male domination and cultural barriers of becoming leaders in communities where women often do not have a voice.  Embassy Gabarone took center stage as the only male youth leader in the room described his activism and role in advocating for the full emancipation of women.  I discussed the importance of engaging, educating and including men in the discussion about the advancement of women and girls to tackle these challenges. President Obama strongly supports this approach, as the White House hosted an event on violence against women which included male panelists to show their constructive role and partnership in mentoring other men.

Ed Kemp reassured the youth leaders that the State Department will continue to provide global platforms of engagement.   Jocelyn closed the session by encouraging the participants to remain committed to the youth empowerment movement, utilize social media to stay connected, harness other civic organizations resources and participate in study abroad programs to engage communities in a substantive way.  As I mentioned in my closing remarks, this global webchat was a wonderful way engage youth from the U.S. in a discussion with their counterparts in Africa. The First Lady will continue to support the ongoing Administration effortS to continue engagement on these issues, and with the next generation of leaders both in Africa and the United States.