July 8, 2011 at 10:50 AM ET by Jovette Gadson
Twitter Facebook Email
Summary:
As a strong supporter of HIV/AIDS awarness in the community, the Center for Faith-based and Neighborhood Partnerships at HUD participated in this year's "Take the Test, Take Control" campaign.

Working to support President Obama’s prevention goals in the National HIV/AIDS Strategy, HUD’s Center for Faith-Based and Neighborhood Partnerships partnered with the HUD Office of HIV/AIDS Housing,  the HUD Health Unit, and a District of Columbia non-profit, Community Education Group to organize the first HUD event featuring voluntary and confidential free screenings for HIV.  The HUD Center was excited to participate because of the numerous faith-based and community organizations that reach out to the Center for information about the agency’s Housing Opportunities for Persons with AIDS (HOPWA) grant.  The Center is proud to support HIV/AIDS awareness in the community and it its agency.

Recently, HUD employees in Washington, DC were able to seek rapid testing (via mouth swab) in the privacy of the HUD Health Unit to help them gain personal knowledge of their HIV status.  In addition to the test, employees were given information linking them to programs that raise awareness to prevent HIV, change behavior as well as information to medical care and social services.  Employees in HUD’s 80 field offices across the United States were encouraged to participate by using the National HIV and STD Testing Resources.

Thirty years have passed since AIDS cases were first reported in the United States and the epidemic is still growing.  Today, the Centers for Disease Controlestimates that approximately 21 percent of the 1.3 million Americans living with HIV are unaware of their HIV status.  The “Take the Test, Take Control” campaign is designed to raise awareness of voluntary HIV counseling and testing as the critical first step in taking control and responsibility over one’s health. 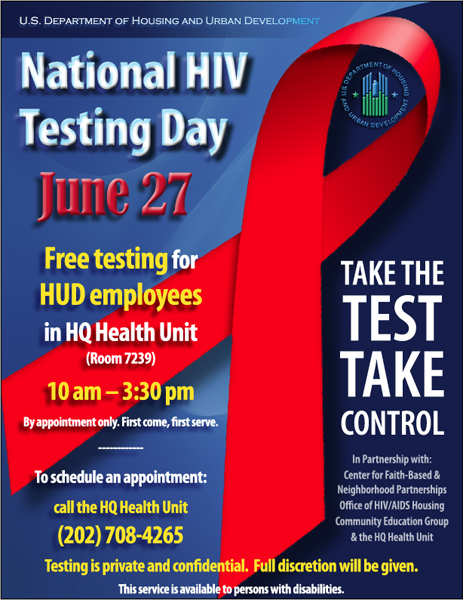 Jovette Gadson serves as  Program Specialist at the Center for Faith-based and Neighborhood Partnerships at the US Department of Housing and Urban Development.