July 13, 2011 at 6:46 PM ET by Alejandra Campoverdi
Twitter Facebook Email
Summary:
President Obama was wrapping up an interview with Mario Andres Moreno for Univision Miami’s Channel 23 at the White House in May when the conversation turned to the Eastern Conference Finals. The two loyal and competitive fans made a friendly wager and last week, President Obama delivered on his promise…with tasty consequences!

President Obama was wrapping up an interview with Mario Andres Moreno for Univision Miami’s Channel 23 at the White House in May when the conversation turned to the Eastern Conference Finals. The Bulls were one game away from facing the Miami Heat and a friendly wager was struck between the two loyal and competitive fans – if the Bulls won, Moreno would send the President some Cuban Fritas -- a treat the President had enjoyed on a recent visit to Miami -- and if the Heat won, the President would send Moreno some fully loaded Chicago Dogs. As fate would have it, the Bulls lost to the Heat and Moreno won the bet.

Last week, as promised, a large package of hot dogs with all the fixins arrived at Channel 23’s offices in Miami with everything needed to bring the Chicago Dog experience to the Sunshine State. Inside the insulated box were packages of all beef hot dogs, poppy seed buns, yellow mustard, bright green relish, onions, tomato wedges, pickle spears, sport peppers and celery salt – as well as a note from President Obama himself. The anchorman generously shared his victors prize with his Univision colleagues and everyone gathered together in the studio for an impromptu hot dog party, courtesy of the President himself.

During the evening news broadcast, Mario Andres Moreno sat in his anchor’s chair with his Chicago Dog waiting in front of him as he recounted the story with his co-anchors.  A screen shot behind them featured a picture of the President, a hot dog, and the tag, “Palabra Cumplida”– “Kept His Word.”

The President is looking forward to a delivery of Cuban Fritas to the White House next season! 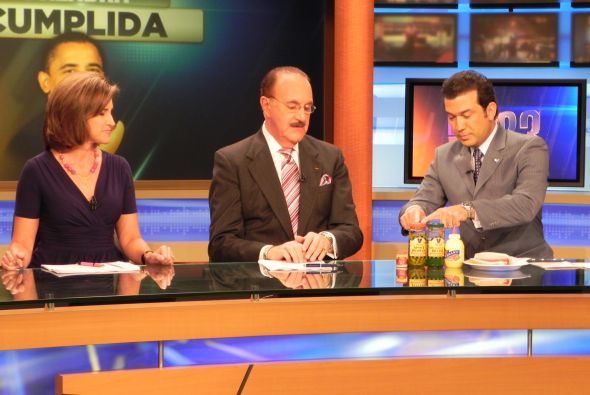