Calling All Federal Employees: We Need Your Help to Cut Wasteful Spending

July 14, 2011 at 12:08 PM ET by Katelyn Sabochik
Twitter Facebook Email
Summary:
Vice President Biden sends an email to federal employees announcing the launch of the 2011 SAVE Award and publishes an op-ed about about delivering the American taxpayers an accountable government.

The Vice President also published an op-ed in McClatchy newspapers about delivering the American taxpayers an accountable government.

If you're a federal employee, be sure to submit your ideas before July 29, 2011.

As one of the outstanding federal employees who has participated in the SAVE Award in previous years, you should be the first to know that submissions for the 2011 SAVE Award are open.

We need your help in identifying ways to cut wasteful federal spending. If you have an idea, take a few minutes right now to submit it -- and let your co-workers know about this great opportunity: 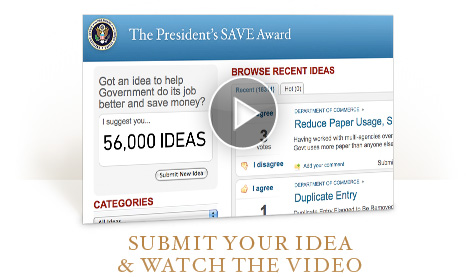 The SAVE award is a critical part of the Campaign to Cut Waste that President Obama and I announced last month. The Campaign is an Administration-wide initiative to hunt down and eliminate wasteful spending and make government work better. Our goal is efficient spending of every tax dollar, in every agency and department across the federal government.

We know that federal employees like you know the most about how government works – and in some cases, doesn’t work as efficiently as it should.

Over the past two years, federal workers have submitted more than 56,000 cost-cutting ideas to the Office of Management and Budget (OMB) for review through the SAVE Award. The ideas you submitted through the 2009 and 2010 SAVE Awards were sent to the appropriate agency for review and dozens were included in the President’s budget proposals.

Last year’s winner, Trudy Givens, proposed that the federal government stop printing and mailing copies of the Federal Register to thousands of federal employees each day since the same information is available online. Trudy, her husband and her daughter got a chance to discuss her idea with President Obama in the Oval Office last year.

You could be this year’s winner and meet with President Obama, so make sure you visit WhiteHouse.gov/Save-Award and submit your idea before July 29, 2011.

Folks, we know that these ideas alone aren’t going to eliminate the deficit or fix our fiscal situation, but they are critical to making sure the American people can trust their government to spend their tax dollars wisely – and to make sure that we are directing resources to the investments that will create good jobs and grow the economy.

P.S. Today, I published an op-ed about delivering an accountable government to the American taxpayers. You can read it here.