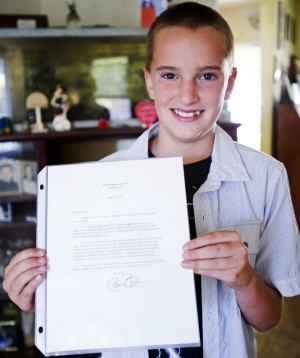 James Henderson, 12, holds up a letter from President Barack Obama. Henderson wrote to the President in May about cuts to education. July 18, 2011. (by Lodi News-Sentinel)

It’s no secret that schools around the country are facing deep budget cuts, often resulting in layoffs of staff and teachers and putting the burden on teachers to purchase much-needed supplies for their classrooms. The lack of school supplies caused one Lodi, California middle school student to take his case directly to President Obama in a letter.

In the President’s personal response, he thanked Henderson for sharing his ideas and commended him for his commitment to the community. “In America, each of us can write our own destiny,” the President wrote. “So long as you are willing to dream big and work hard, you can accomplish great things and help others to do the same.”

Secretary Duncan calls this tough economic climate for schools “the new normal.” To address the new normal, the Department of Education recently offered promising practices to states and communities on the effective, efficient and responsible use of resources in tight budget times. “We have to continue to invest [in education]” Duncan recently warned. “Budgets reflect our values, they reflect our priorities.”

Read more about James Henderson and President Obama’s response at the Lodi News-Sentinel.