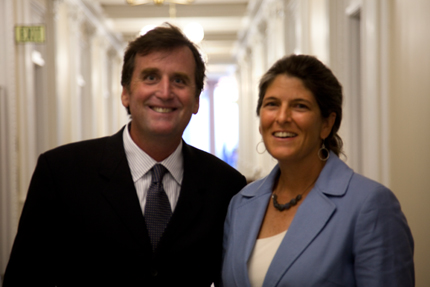 Last week in our meeting with Secretary Vilsack concerning rural development opportunities it became apparent that our country is facing a critical point. Energy and food production are approaching unprecedented challenges with occurrences such as China, South Korea and Saudi Arabia’s recent purchases and leases of over 140 million acres of land in Ethiopia and Sudan. To put things in perspective, this is the equivalent of all of the U.S.’s wheat and corn land currently in production.

The United States is fortunate enough to have abundant and fertile land and a strong transportation infrastructure. The challenge is to turn our focus to rural America, from which so much of our food and energy come but which has only 16% of our population. Fellow Champions of Change outlined many creative ways of addressing rural America’s needs. Local food movements, energy efficient and consolidated housing development, and energy crops were among some of the many established and on-the-ground examples that are already functioning and put in place by just the few people in the room. All of these examples had something in common, which was the support of the USDA either through outreach or initial funding.

Down to Earth Energy was able to get a start through USDA involvement. Our local Rural Development representative helped by connecting us with others, sharing examples of technologies that work, and assisting with start-up costs. The USDA Rural Energy for America Program (REAP) was instrumental in giving us a fighting chance in a highly competitive and speculative energy market. In return we will provide our state with over 1 million gallons of clean, renewable and local biodiesel, 5 permanent jobs, and by-products that will feed livestock and fire boilers. Although this is just a drop in the bucket for our nation, it is a start. Unfortunately, the REAP program is facing cuts like many programs that would help to establish an energy and food infrastructure that we so direly need to deal with future demands. Past national achievements such as our highway infrastructure or the hydro-electric projects would not have been completed without governmental involvement. When it comes to energy and food, we must continue to support biomass crops, renewable energy such as solar, wind, biodiesel and cellulosic ethanol, and continue to invent and implement clean technologies for use in existing power sources. This will be our competitive edge in a world that is quickly changing, with a population that will grow from the current 6.7 billion to 9 billion in just 30 years and a land mass that is already 25% dedicated to food production.

Rick Huszagh and Crista Carrell established Down to Earth Energy, a commerical biodiesel production facility that partners with the University of Georgia on research initiatives.