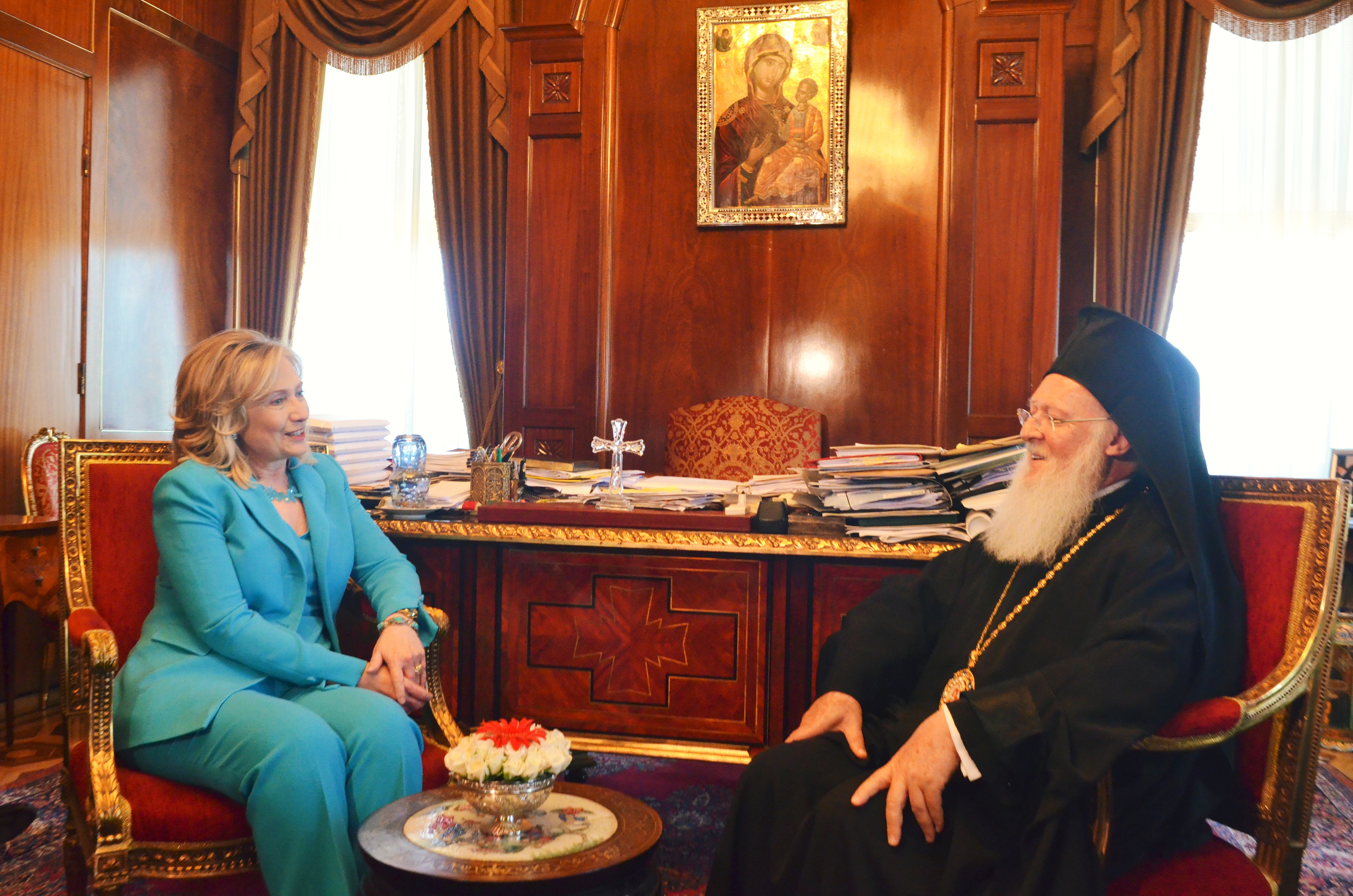 Secretary Clinton meets with His All Holiness Bartholomew I, July 16, 2011, Istanbul. (Photo by Ecumenical Patriarchate)

Last weekend I had the opportunity to join Secretary Clinton for an outstanding set of meetings with Greek political and religious leaders.

First, Secretary Clinton travelled to Istanbul, where she visited the Ecumenical Patriarch, His All Holiness Bartholomew I, His Eminence Archbishop Demetrios Trakatellis of America, and Father Alexander Karloutsos.  Each has visited the White House at the invitation of the President, in 2009, 2010, and this year, and it was a privilege to visit the Patriarchate and meet in the private office of His All Holiness.  He noted that this was Secretary Clinton's third visit and thanked her for the "excellent" dinner she had hosted for him in Washington in November 2009.  The atmosphere was extremely positive as they discussed the Obama Administration's commitment to religious freedom and the importance of reopening the Halki Seminary.  Secretary Clinton also raised this subsequently in key meetings with Turkish leaders, where she noted progress made in giving citizenship to a number of  Orthodox clerics, which will help ensure succession, and urged further progress this year, which marks the 20th anniversary of His All Holiness' leadership.  His All Holiness offered us a special glass of water with a spoon that had a sweet white fondant on it, which we enjoyed.  Secretary Clinton also lit a candle in the beautiful Cathedral Church of Saint George, which has been the seat of the Ecumenical Patriarchate of Constantinople since 1600.

We travelled onward to Athens to show our strong support for the courageous economic reforms that the Greek government has undertaken and our solidarity with the Greek people, who are weathering tough times.  The streets were lined with well-wishers as our motorcade moved through the city to meet with President Papoulias, Prime Minister Papandreou, Foreign Minister Lambrinidis, and Finance Minister Venizelos.  In all of her meetings, the Secretary praised Greece for its efforts to tackle its debt and implement tough austerity measures that will put the country back on the path to economic stability and prosperity.  “Greece has inspired the world before, and I have every confidence that you are doing so again,” she said.

Secretary Clinton and her delegation also made a visit to the magnificent new Acropolis Museum, where she enjoyed seeing the treasures of Greek civilization, signed a cultural cooperation agreement to prevent illicit trade in archeological artifacts, and was greeted with applause by those who were surprised to find the American Secretary of State strolling through the galleries on a sunny Sunday afternoon!  That evening, Secretary Clinton watched the Women's World Cup soccer final and enjoyed Greek seafood and traditional sweets with our Ambassador to Greece, Dan Smith, his wife Diane, and the Secretary’s traveling team.

All in all, it was a productive trip – and one that highlighted the deep cultural ties, shared values, and strong alliance between the United States and Greece.

Liz Sherwood-Randall is Special Assistant to the President for National Security Affairs and Senior Director for European Affairs.