July 20, 2011 at 11:37 AM ET by Jeffrey Zients
Twitter Facebook Email
Summary:
As part of the President’s Campaign to Cut Waste, we will shut down 178 data centers in 2012, bringing us to a total of 373 data centers that will be closed by the end of next year.

Just as our cell phones and computers have gotten progressively more efficient over the past decade, so too have data servers. However, the government has not taken advantage of the increasing efficiency of data storage. Rather than follow the private sector's lead of shrinking the size and number of the facilities used to house the computers that store their data, agencies have gone in the opposite direction.

Between 1998 and 2010, the Federal government quadrupled the number of data centers we operate.  Moreover, on average these centers have been using only 27 percent of their computer power even though taxpayers are footing the bill for the entire infrastructure, real estate and energy costs. The need for backup power supplies, environmental controls (air conditioning, fire suppression, etc.) and special security devices mean that data centers can consume 200 times as much electricity as standard office spaces.

While such inefficiency is unacceptable at anytime, cracking down on waste is particularly important in these challenging budgetary times. By shrinking our data center footprint we will save taxpayer dollars, cutting costs for infrastructure, real estate and energy. At the same time, moving to a more nimble 21st century model will strengthen our security and the ability to deliver services for less. 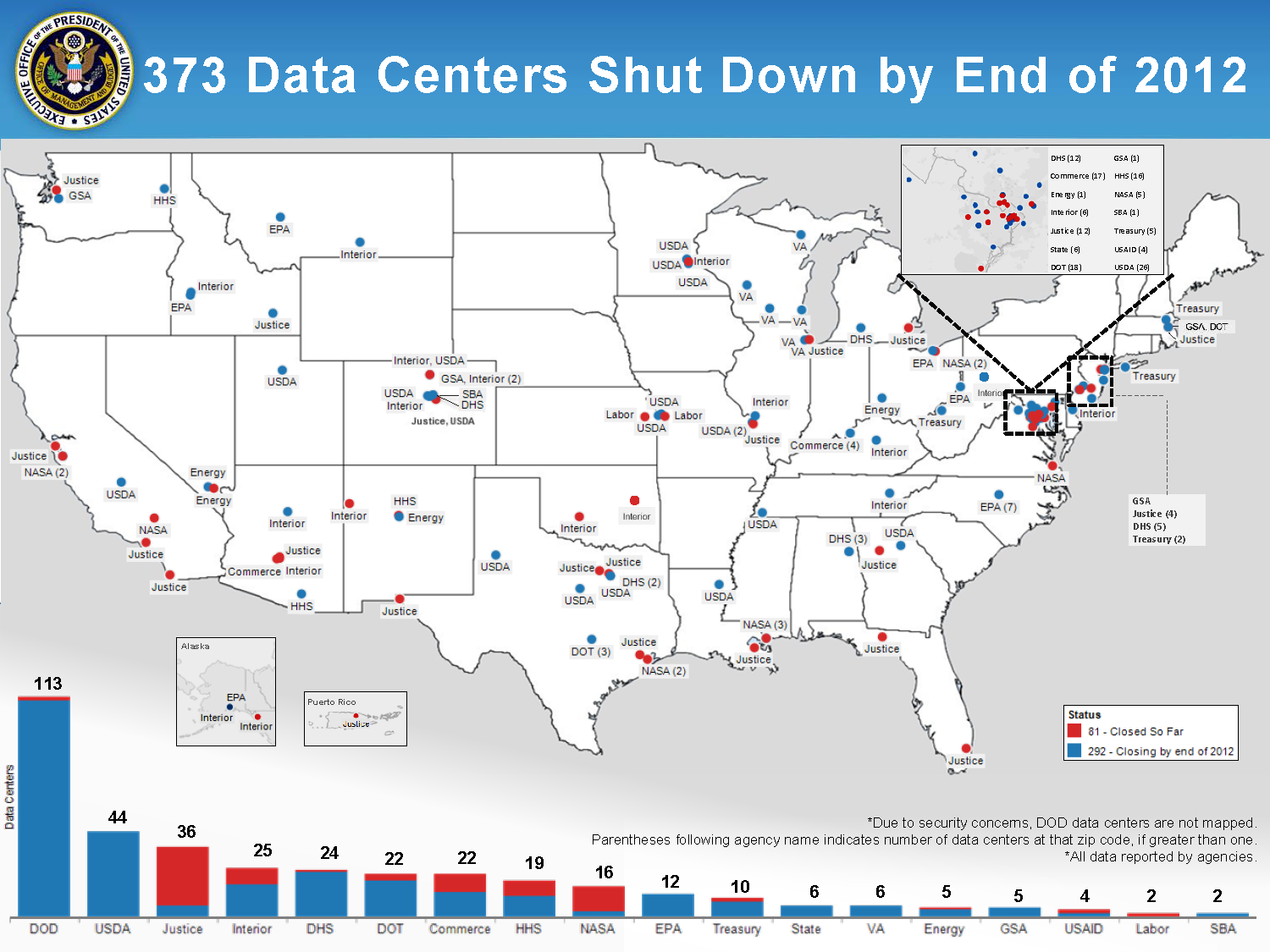 Today, as part of the President’s Campaign to Cut Waste, we are announcing that in 2012, we will shut down 178 data centers, bringing us to a total of 373 data centers that will be shut down by the end of 2012.  We are closing 195 data centers in this calendar year, of which 81 have already been shut down.  This represents substantial progress towards our goal of shutting down more than 800 data centers by 2015, a move that is expected to save taxpayers more than $3 billion.

The data centers being shut down are scattered across dozens of states and range from a 57,000 sq ft Department of Defense (DOD) facility - roughly the size of a football field to four Department of Agriculture data centers in the same zip code, each of which is less than 1,000 square feet.  In another instance, the Department of the Treasury is closing a nearly 13,000 square foot facility in Lanham, Maryland.  This facility has 75 racks, hosts 250 servers, and costs taxpayers more than $400,000 a year for leasing and electricity alone. The DOD alone will close 113 data centers that total 181,632 square feet, the size of more than three football fields.

You can see a complete list of the affected centers here.

The Campaign to Cut Waste is an effort to hunt down and eliminate misspent tax dollars in every agency and department across the federal government. The Campaign builds on the Administration’s ongoing effort to make government more efficient, effective and accountable to the American people. You can read more about that work here.

CORRECTION: An earlier version of this blog post contained erroneous data regarding a DHS facility.