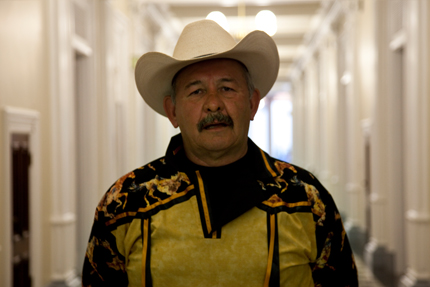 Being a part of the White House “Champions of Change” is both an honor and humbling experience. It was an honor to be in the presence of the President and humbling as there are thousands out there who have accomplished more for their communities than me.

I began work for the Intertribal Agriculture Council (IAC) 20 years ago as a Natural Resource Director which entailed the identification and solutions to regulatory barriers presented by both the Department of Agriculture and Department of Interior. In 1998, I was promoted to Director of Programs and assigned the responsibility of the day to day supervision of the 11 employees. The individual who played the leadership role in bringing about the formation of the IAC had to resign for medical reasons in 2001 and the Board of Directors selected me to fulfill the role of Executive Director.

The IAC Board of Directors is comprised of individual Board Members who represent one of the 12 regions of Indian Country, and it is the Board of Directors that set the priorities for the overall direction of the organization as well as assign tasks to the Executive Director. For this reason, I believe that each of our Directors should play a role in the recognition of the Intertribal Agricultural Council.

IAC was founded in 1987 by order of Congress to pursue and promote the conservation, development and use of Indian Country agricultural resources for the betterment of Native American people. Land-based agricultural resources are vital to the economic and social welfare of many Native American and Alaskan Tribes. The harmonies of man, soil, water, air, vegetation and wildlife that collectively make-up the American Indian agriculture community, influence our emotional and spiritual well-being. Prior to 1987, American Indian agriculture was basically unheard of outside reservation boundaries.

Since that time, IAC has grown to prominence in Indian Country and among the federal government agencies and the agricultural field with which it works on behalf of individual Indian producers and Tribal enterprises. The IAC has become recognized as the most respected voice within the Indian community and government circles on agricultural policies and programs in Indian country. The IAC is a 501(c)(3) organization made up of member Tribes and provides service to the 563 federally recognized Tribes in the U.S.

IAC has endeavored to remove barriers to successful Indian agriculture and to open doors in both the Department of Agriculture and Department of Interior. The removal of barriers began with the 1990 Farm Bill in which USDA agencies were authorized to offer programs and services to individual Indians and their respective Tribal governments. In 1993, the IAC was successful in getting the Indian Agriculture Management Act passed which recognized the authority of Tribal Governments to set policy and procedures in the leasing of Indian agriculture lands and aligned those lease terms with programs of USDA. IAC has worked on every Farm Bill since 1990 in the effort to improve Indian access to programs and ensure Indian agriculture is recognized in the agriculture census processes.

Once the Departments’ regulations were somewhat aligned, the IAC began providing technical assistance for improving the access and use of all USDA programs. Presently, through an agreement with the USDA Office of Tribal Relations, this educational effort continues. IAC staffs offices throughout Indian Country to provide technical assistance on the array of programs and services offered through USDA across many of its key agencies such as Farm Service Agency, Natural Resources Conservation Service, Rural Development, Foreign Agricultural Service, Animal and Plant Health Inspection Service, and many others.

Ross Racine is the Executive Director of Intertribal Agriculture Council. He assumed those duties in January 2001. He served as the IAC Natural Resources Director beginning in 1991, and as the IAC Director of Programs since 1999.