If You Want to be a Leader, Then You Got to Lead

July 22, 2011 at 9:30 PM ET by Colleen Curtis
Twitter Facebook Email
Summary:
The President held a press conference to provide an update on the ongoing budget negotiations after Speaker Boehner walked away from these negotiations as they were working towards a big deficit and debt reduction package

Tonight, the President held a press conference to provide an update on the ongoing budget negotiations to get our fiscal house in order and reduce our nation’s deficit to help our economy grow.  Unfortunately, Speaker Boehner walked away from these negotiations as they worked towards a big deficit and debt reduction package.

Tomorrow at the White House, the President will meet with members of both parties, including Leader Reid, Leader McConnell, Speaker Boehner and Leader Pelosi, to continue to hammer out a deal to ensure that Congress acts to reduce our deficit and prevent America from defaulting on its obligations.

Here are a few highlights from tonight’s press conference:

What the President Offered (jump to section in video)

So let me reiterate what we were offering... we were calling for modifications to entitlement programs, would have saved just as much over the 10-year window.  In other words, this was an extraordinarily fair deal.  If it was unbalanced, it was unbalanced in the direction of not enough revenue.

But in the interest of being serious about deficit reduction, I was willing to take a lot of heat from my party -- and I spoke to Democratic leaders yesterday, and although they didn’t sign off on a plan, they were willing to engage in serious negotiations, despite a lot of heat from a lot of interest groups around the country, in order to make sure that we actually dealt with this problem.

Shifting the Burden (jump to section in video)

Now, if you do not have any revenues, as the most recent Republican plan that’s been put forward both in the House and the Senate proposed, if you have no revenues at all, what that means is more of a burden on seniors, more drastic cuts to education, more drastic cuts to research, a bigger burden on services that are going to middle-class families all across the country.  And it essentially asks nothing of corporate jet owners, it asks nothing of oil and gas companies, it asks nothing from folks like me who’ve done extremely well and can afford to do a little bit more.

In other words, if you don’t have revenues, the entire thing ends up being tilted on the backs of the poor and middle-class families.  And the majority of Americans don’t agree on that approach.

Can they Say Yes to Anything? (jump to section in video)

And I think that one of the questions that the Republican Party is going to have to ask itself is can they say yes to anything?  Can they say yes to anything?  I mean, keep in mind it’s the Republican Party that has said that the single most important thing facing our country is deficits and debts.  We’ve now put forward a package that would significantly cut deficits and debt.  It would be the biggest debt reduction package that we’ve seen in a very long time.

And it’s accomplished without raising individual tax rates. It’s accomplished in a way that’s compatible with the “no tax” pledge that a whole bunch of these folks signed on to -- because we were mindful that they had boxed themselves in and we tried to find a way for them to generate revenues in a way that did not put them in a bad spot.

And so the question is, what can you say yes to?  Now, if their only answer is what they’ve presented, which is a package that would effectively require massive cuts to Social Security, to Medicare, to domestic spending, with no revenues whatsoever, not asking anything from the wealthiest in this country or corporations that have been making record profits -- if that’s their only answer, then it’s going to be pretty difficult for us to figure out where to go.  Because the fact of the matter is that’s what the American people are looking for, is some compromise, some willingness to put partisanship aside, some willingness to ignore talk radio or ignore activists in our respective bases, and do the right thing.

Will Social Security Checks Go Out? (jump to section in video)

Well, when it comes to all the checks, not just Social Security -- veterans, people with disabilities -- about 70 million checks are sent out each month -- if we default then we’re going to have to make adjustments.  And I’m already consulting with Secretary Geithner in terms of what the consequences would be.

We should not even be in that kind of scenario.  And if Congress -- and in particular, the House Republicans -- are not willing to make sure that we avoid default, then I think it’s fair to say that they would have to take responsibility for whatever problems arise in those payments.  Because, let me repeat, I’m not interested in finger-pointing and I’m not interested in blame, but I just want the facts to speak for themselves.

We have put forward a plan that is more generous to Republican concerns than a bipartisan plan that was supported by a number of Republican senators, including at least one that is in Republican leadership in the Senate.  Now, I’ll leave it up to the American people to make a determination as to how fair that is.  And if the leadership cannot come to an agreement in terms of how we move forward, then I think they will hold all of us accountable.

But that shouldn’t even be an option.  That should not be an option.  I’m getting letters from people who write me and say, at the end of every month I have to skip meals.  Senior citizens on Social Security who are just hanging on by a thread.  Folks who have severe disabilities who are desperate every single month to try to figure out how they’re going to make ends meet.  But it’s not just those folks.  You’ve got business contractors who are providing services to the federal government, who have to wonder are they going to be able to get paid and what does that do in terms of their payrolls.

You’ve got just a huge number of people who, in one way or another, interact with the federal government.  And even if you don’t, even if you’re not a recipient of Social Security, even if you don’t get veterans’ benefits or disabilities, imagine what that does to the economy when suddenly 70 million checks are put at risk.  I mean, if you’re a business out there, that is not going to be good for economic growth.  And that’s the number one concern of the American people.

If You Want To Be a Leader, Then You Got To Lead (jump to section in video)

The hard part is actually dealing with the underlying debt and deficits, and doing it in a way that’s fair.  That’s all the American people are looking for -- some fairness.  I can’t tell you how many letters and emails I get, including from Republican voters, who say, look, we know that neither party is blameless when it comes to how this deft and deficit developed -- there’s been a lot of blame to spread around -- but we sure hope you don’t just balance the budget on the backs of seniors.  We sure hope that we’re not slashing our commitment to make sure kids can go to college.  We sure hope that we’re not suddenly throwing a bunch of poor kids off the Medicaid rolls so they can’t get basic preventative services that keep them out of the emergency room.  That’s all they’re looking for, is some fairness.

Now, what you’re going to hear, I suspect, is, well, if you -- if the Senate is prepared to pass the cap, cut and balance bill, the Republican plan, then somehow we can solve this problem -- that’s serious debt reduction.  It turns out, actually, that the plan that Speaker Boehner and I were talking about was comparable in terms of deficit reduction.  The difference was that we didn’t put all the burden on the people who are least able to protect themselves, who don’t have lobbyists in this town, who don’t have lawyers working on the tax code for them -- working stiffs out there, ordinary folks who are struggling every day.  And they know they’re getting a raw deal, and they’re mad at everybody about it.  They’re mad at Democrats and they’re mad at Republicans, because they know somehow, no matter how hard they work, they don’t seem to be able to keep up.  And what they’re looking for is somebody who’s willing to look out for them.  That’s all they’re looking for.

I mean, the American people are just desperate for folks who are willing to put aside politics just for a minute and try to get some stuff done.

So when Norah asked or somebody else asked why was I willing to go along with a deal that wasn’t optimal from my perspective, it was because even if I didn’t think the deal was perfect, at least it would show that this place is serious, that we’re willing to take on our responsibilities even when it’s tough, that we’re willing to step up even when the folks who helped get us elected may disagree.

And at some point, I think if you want to be a leader, then you got to lead. 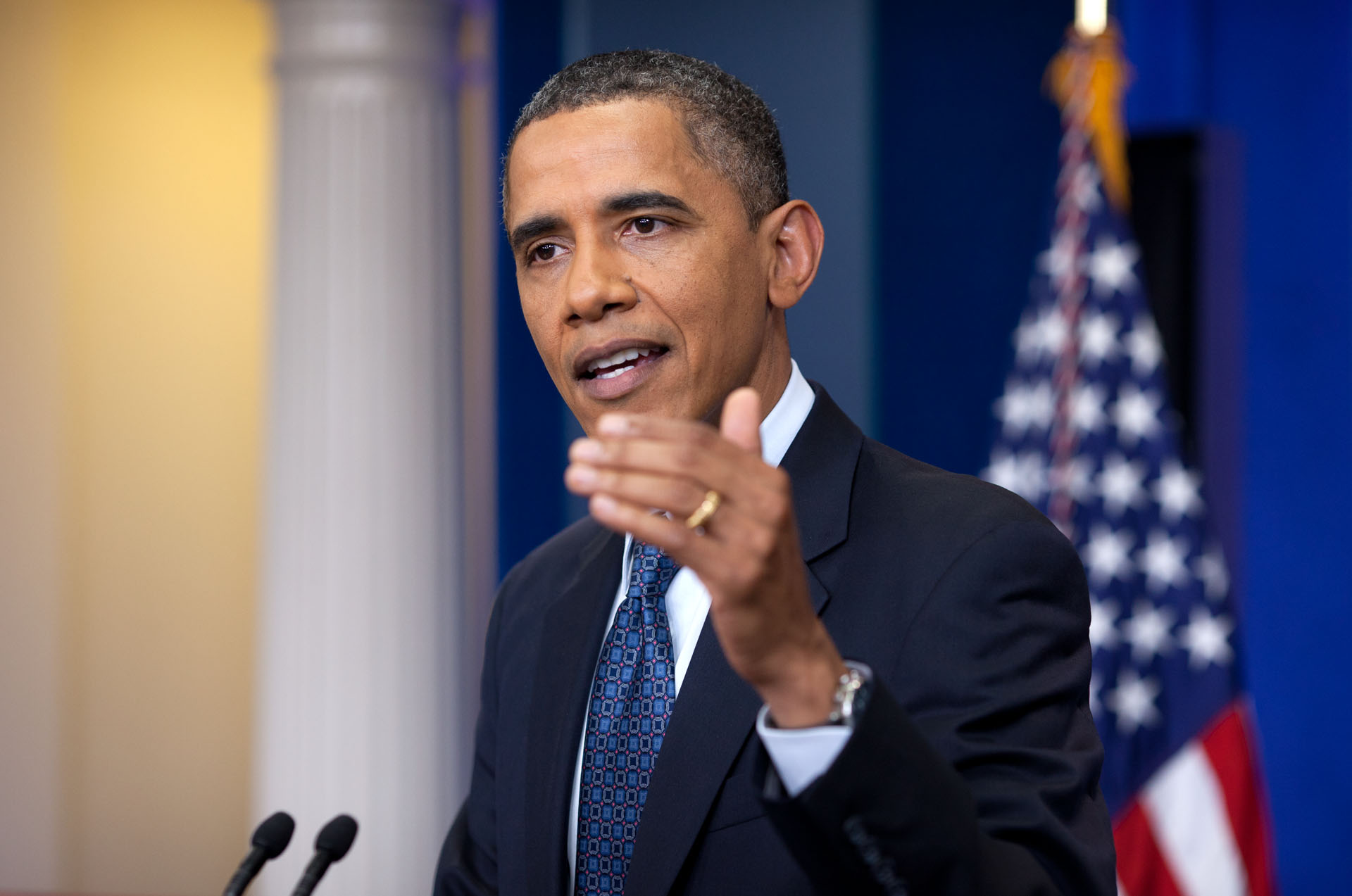 President Barack Obama makes a statement to the press in the Brady Briefing Room at the White House, July 22, 2011. (Official White House Photo by Chuck Kennedy)