Virginia Ministry Uses Networks to Get People Back to Work

July 28, 2011 at 10:28 AM ET by Cindy Huynh
Twitter Facebook Email
Summary:
Cindy Huynh, a summer intern in the Office of the Secretary at the U.S. Department of Labor, reflects on her visit to the Career Network Ministry at McLean Bible Chuch in Northern Virginia.

Earlier this month, I joined some colleagues at the Department of Labor’s Center for Faith-based and Neighborhood Partnerships on a visit to the Career Network Ministry (CNM) at McLean Bible Church in Northern Virginia. The visit was made in conjunction with the Center’s efforts to identify job clubs across the country and connect them to one another and to the workforce investment system. CNM is one of the most successful and celebrated job clubs in the country, so there was much anticipation for our visit.

With an active roster of 1,300 members and an average of 75 to 100 participants per meeting, running the group’s Tuesday evening sessions is no easy feat. However, thanks to a corps of more than 150 dedicated volunteers, many of whom found their own jobs through CNM, the ministry has grown over the past three years to provide a variety of employment and support services. During the first part of the weekly meetings, job seekers engage in a range of small-group and one-on-one activities, including resume critique and interview training, consultations with human resources executives and other employer representatives, and prayer groups that offer faith and moral support. New members are given the CNM Handbook, a valuable resource that addresses topics such as marketing plans, traditional and non-traditional job search and networking techniques, and managing depression and disappointment while unemployed. 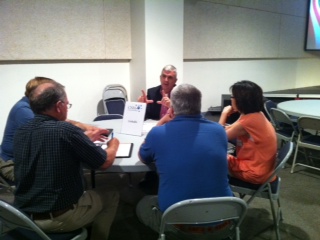 At the Career Network Ministry (CNM) hosted by McLean Bible Church in Northern Virginia, job seekers begin the Tuesday evening meetings in small-group sessions where they learn and discuss topics such as marketing oneself, interview skills, and professional networking. July 22, 2011. (by Ben Seigel)

I was able to observe many of these various sessions, all of which are available and free to people from the broader community, not just congregation members. Following the smaller, break-out sessions, we participated in a gathering of the full group in attendance that evening, about 125 members. We heard "victory lap" speeches from members who had recently landed new jobs. Additionally, a guest speaker, social media guru Rob Mendez, shared tips and strategies for getting the most out of LinkedIn and other tools. Rob revealed some tricks of the trade for landing at the top of a search for job candidates on LinkedIn. Finally, DOL Center’s Deputy Director Ben Seigel shared remarkswith the group on the Center’s new project and praised CNM’s work. “This ministry is a testament to the power of community and volunteers to come together and help out your neighbors, and achieve real results in getting people back to work,” said Ben. 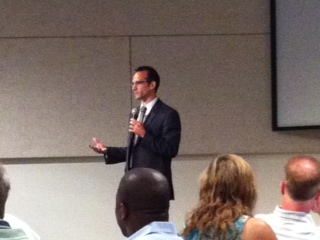 Ben Seigel, deputy director of the Center for Faith-based and Neighborhood Partnerships at the Department of Labor, addresses the full meeting of the Career Network Ministry at McLean Bible Church. July 22, 2011. (by Ben Seigel)

During my visit, I was very impressed with the positive, go-getter attitude that the group exuded, as well as the variety of training it offered. The tremendous amount of support provided by CNM’s volunteers has also proved to be invaluable to its job seeking members. For that reason, I was not surprised to learn that despite the fact that CNM advertises only through word of mouth, the group continues to gain about 25 new members each week, evidence of its success and impact on its members. 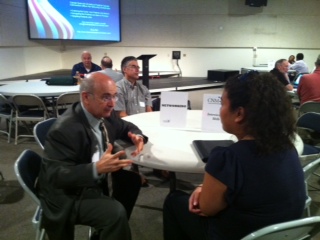 Job seekers at CNM who matriculate through a series of seminar sessions have an opportunity to interview with business executives seeking new employees or discuss job seeking strategies one-on-one with human resources professionals. July 22, 2011. (by Ben Seigel)

Cindy Huynh is a summer intern in the Office of the Secretary at the U.S. Department of Labor. She is a rising junior at Cornell University.