July 29, 2011 at 10:15 AM ET by Austan Goolsbee
Twitter Facebook Email
Summary:
Austan Goolsbee, Chairman of the Council of Economic Advisers, discusses the GDP numbers for the second quarter of 2011.

Today’s report shows that the economy posted the eighth straight quarter of positive growth, as real GDP (the total amount of goods and services produced in the country) grew, but at only a 1.3 percent annual rate in the second quarter of this year.  The downward revision in the first quarter to 0.4 percent further reflects the slowdown of economic growth due to substantial headwinds faced in the first half of this year. Additionally, the annual revision to GDP showed that the Great Recession – the worst on record – was even deeper than originally estimated.

We are at a fragile moment in the world economy and cannot afford to do anything to undermine our recovery at a moment such as this.  The unemployment rate is unacceptably high and faster growth is needed to replace the jobs lost in the downturn. This report underscores the need for bipartisan action to help the private sector and the economy grow – such as measures to extend the payroll tax cut and unemployment insurance, pass the pending free trade agreements with re-employment assistance for displaced workers, and create an infrastructure bank to help put Americans back to work.  It also underscores the need to end the uncertainty surrounding the risk of default and put in place a balanced approach to deficit reduction that phases in budget cuts, instills confidence, and allows us to live within our means without shortchanging future growth.

Notable contributions to real GDP growth in the second quarter included net exports (0.6 percentage points) and fixed investment (0.7 p.p.). Defense spending added 0.4 p.p. to GDP, but this gain was offset by declines in state and local government (-0.4 p.p.) and nondefense spending (-0.2 p.p.). Consumer spending rose just 0.1 percent at an annual rate, with a steep decline (23 percent) in motor vehicle consumption accounting for the weakness. The downward revision to first quarter GDP from 1.9 percent to 0.4 percent reflects lower contributions from inventory investment and imports. 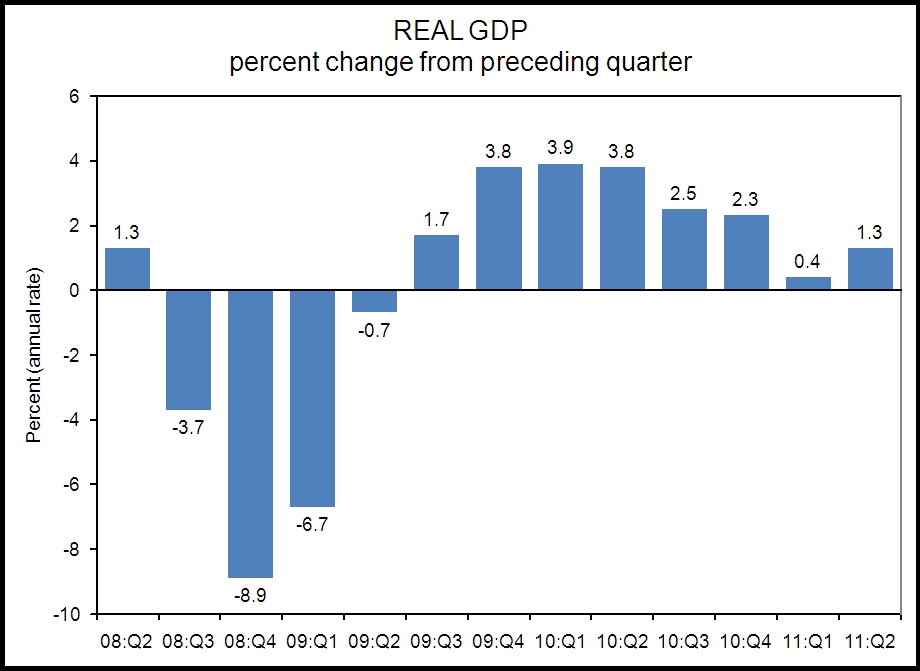