July 31, 2011 at 9:56 PM ET by Macon Phillips
Twitter Facebook Email
Summary:
Tonight, President Obama spoke in support of a bipartisan deal to reduce the nation's deficit and avoid default. It extends the debt limit to 2013, removing the cloud of uncertainty over our economy and ensuring that no one will be able to use the threat of default now or in only a few months for political gain.

Tonight, President Obama spoke in support of a bipartisan deal to reduce the nation's deficit and avoid default. It extends the debt limit to 2013, removing the cloud of uncertainty over our economy and ensuring that no one will be able to use the threat of default now or in only a few months for political gain. The bipartisan compromise assures that the United States meets its obligations – including monthly Social Security checks, veterans’ benefits, and the government contracts we’ve signed with thousands of businesses.

In order to receive the support from both parties -- as the President has consistently stressed -- the agreement has a few important elements:

This fact sheet provides and even more comprehensive overview of the deal.

Good evening.  There are still some very important votes to be taken by members of Congress, but I want to announce that the leaders of both parties, in both chambers, have reached an agreement that will reduce the deficit and avoid default -- a default that would have had a devastating effect on our economy.
The first part of this agreement will cut about $1 trillion in spending over the next 10 years -- cuts that both parties had agreed to early on in this process.  The result would be the lowest level of annual domestic spending since Dwight Eisenhower was President -- but at a level that still allows us to make job-creating investments in things like education and research.  We also made sure that these cuts wouldn’t happen so abruptly that they’d be a drag on a fragile economy.
Now, I've said from the beginning that the ultimate solution to our deficit problem must be balanced.  Despite what some Republicans have argued, I believe that we have to ask the wealthiest Americans and biggest corporations to pay their fair share by giving up tax breaks and special deductions.  Despite what some in my own party have argued, I believe that we need to make some modest adjustments to programs like Medicare to ensure that they’re still around for future generations.
That's why the second part of this agreement is so important.  It establishes a bipartisan committee of Congress to report back by November with a proposal to further reduce the deficit, which will then be put before the entire Congress for an up or down vote.  In this stage, everything will be on the table. To hold us all accountable for making these reforms, tough cuts that both parties would find objectionable would automatically go into effect if we don’t act.  And over the next few months, I’ll continue to make a detailed case to these lawmakers about why I believe a balanced approach is necessary to finish the job.
Now, is this the deal I would have preferred?  No.  I believe that we could have made the tough choices required -- on entitlement reform and tax reform -- right now, rather than through a special congressional committee process.  But this compromise does make a serious down payment on the deficit reduction we need, and gives each party a strong incentive to get a balanced plan done before the end of the year.
Most importantly, it will allow us to avoid default and end the crisis that Washington imposed on the rest of America.  It ensures also that we will not face this same kind of crisis again in six months, or eight months, or 12 months.  And it will begin to lift the cloud of debt and the cloud of uncertainty that hangs over our economy.
Now, this process has been messy; it’s taken far too long.  I've been concerned about the impact that it has had on business confidence and consumer confidence and the economy as a whole over the last month.  Nevertheless, ultimately, the leaders of both parties have found their way toward compromise.  And I want to thank them for that.
Most of all, I want to thank the American people.  It’s been your voices -- your letters, your emails, your tweets, your phone calls -- that have compelled Washington to act in the final days. And the American people's voice is a very, very powerful thing.
We’re not done yet.  I want to urge members of both parties to do the right thing and support this deal with your votes over the next few days.  It will allow us to avoid default.  It will allow us to pay our bills.  It will allow us to start reducing our deficit in a responsible way.  And it will allow us to turn to the very important business of doing everything we can to create jobs, boost wages, and grow this economy faster than it's currently growing.
That’s what the American people sent us here to do, and that’s what we should be devoting all of our time to accomplishing in the months ahead.
Thank you very much, everybody. 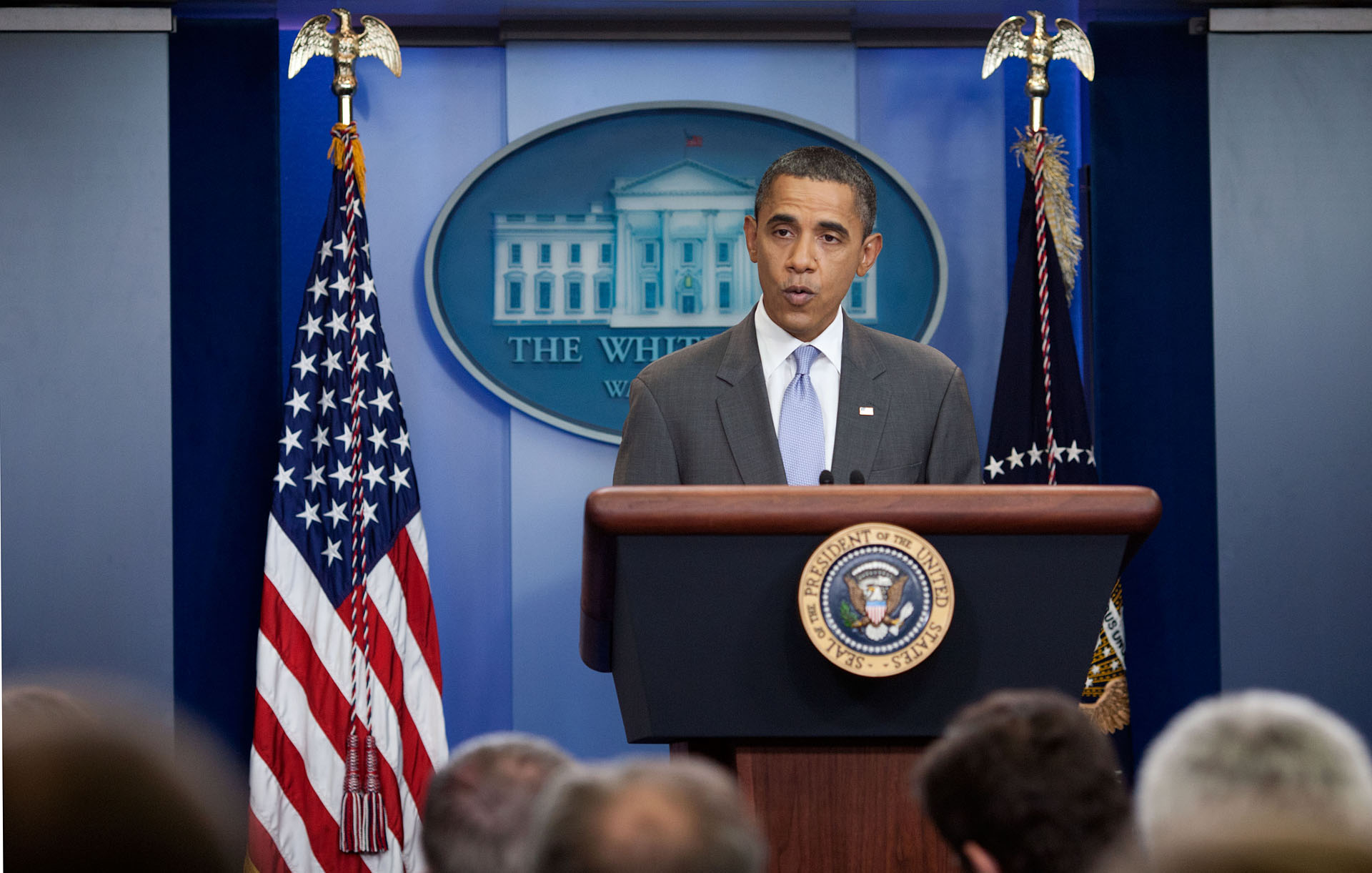 President Barack Obama makes a statement in the Brady Press Briefing Room at the White House announcing a deal in the ongoing efforts to find a balanced approach to the debt limit and deficit reduction, July 31, 2011. (Official White House Photo by David Lienemann)