Putting Americans Back to Work: President Obama Speaks on the Debt Compromise

August 2, 2011 at 2:11 PM ET by Kori Schulman
Twitter Facebook Email
Summary:
After Congress approves the compromise to reduce the deficit and avert a default that would have devastated the economy, President Obama addresses this important first step from the Rose Garden

This afternoon, Congress approved a compromise to reduce the deficit and avert a default that would have devastated the economy. Speaking from the Rose Garden,  President Obama thanked the American people for reaching out to their elected officials during the debate, and stressed that this compromise guarantees more than $2 trillion in deficit reduction, and will ensure that as a nation we live within our means, while still making key investments in things that lead to new jobs, like education and research.

The President noted that this is just the first step, and that both parties must work together on a larger plan for the long-term health of our economy:

And since you can’t close the deficit with just spending cuts, we’ll need a balanced approach where everything is on the table.  Yes, that means making some adjustments to protect health care programs like Medicare so they’re there for future generations. It also means reforming our tax code so that the wealthiest Americans and biggest corporations pay their fair share. And it means getting rid of taxpayer subsidies to oil and gas companies, and tax loopholes that help billionaires pay a lower tax rate than teachers and nurses.

I’ve said it before; I will say it again: We can’t balance the budget on the backs of the very people who have borne the biggest brunt of this recession.  We can’t make it tougher for young people to go to college, or ask seniors to pay more for health care, or ask scientists to give up on promising medical research because we couldn’t close a tax shelter for the most fortunate among us.  Everyone is going to have to chip in.  It’s only fair.  That’s the principle I’ll be fighting for during the next phase of this process. 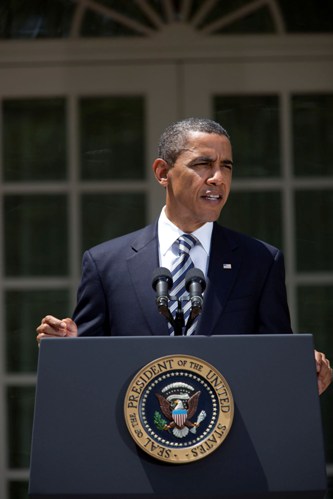 President Barack Obama makes a statement to the media in the Rose Garden of the White House after House and Senate passage of the debt ceiling bill, Aug. 2, 2011. (Official White House Photo by Samantha Appleton)

In the coming months, President Obama will continue to fight for what matters most to the American people: new jobs, higher wages and faster economic growth. And when Congress gets back from recess, the President will urge them to take bipartisan, common-sense steps to help put Americans back to work.

So, we’ve seen in the past few days that Washington has the ability to focus when there’s a timer ticking down, and when there’s a looming disaster.  It shouldn’t take the risk of default -– the risk of economic catastrophe -– to get folks in this town to work together and do their jobs.  Because there’s already a quiet crisis going on in the lives of a lot of families, in a lot of communities, all across the country.  They’re looking for work, and they have been for a while; or they’re making do with fewer hours or fewer customers; or they’re just trying to make ends meet.  That ought to compel Washington to cooperate.  That ought to compel Washington to compromise, and it ought to compel Washington to act.  That ought to be enough to get all of us in this town to do the jobs we were sent here to do.  We’ve got to do everything in our power to grow this economy and put America back to work.