Rural Veterans and the Tyranny of Distance

August 3, 2011 at 8:00 AM ET by Drew Brookie
Twitter Facebook Email
Summary:
For about 3.3 million Vets, or 41 percent of the total enrolled in VA’s health care system, distance is more than a challenge. Distance can mean rural Veterans don’t have access to the care and services they’ve earned.

At the Department of Veterans Affairs, Secretary Shinseki often talks about the tyranny of distance – the distance that often separates Veterans from care at their nearest VA medical facilities. For about 3.3 million Vets, or 41 percent of the total enrolled in VA’s health care system, distance is more than a challenge. Distance can mean rural Veterans don’t have access to the care and services they’ve earned.

Secretary Shinseki made it clear – this summer, he wanted to hear from Veterans in the hardest to reach places. “I know from previous experience that sitting in Washington with a 2,000-mile screwdriver trying to fine tune things at the local level never works,” he said. So, we hit the road to learn firsthand. 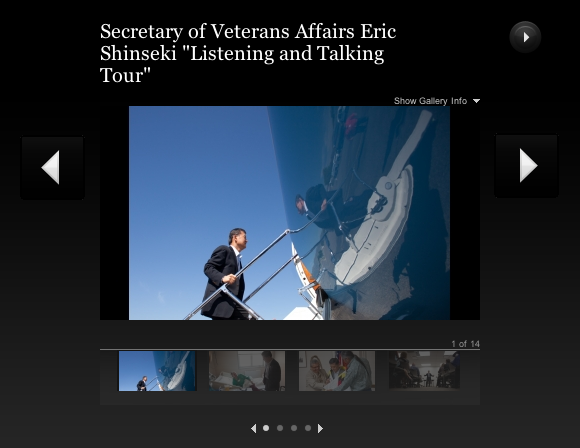 From the plains of North Dakota and Montana to the isolated island of Guam, Veterans from rural areas talked with Secretary Shinseki about what’s working and what the department can do better. To many Veterans, it was clear VA has shifted its approach to be more accessible. But we also quickly learned that standard definitions like “urban, rural, and highly rural” may not be exact enough.  Often, “remote, extreme rural, and inaccessible” is more accurate.

The “inaccessible” category would definitely include Kwigillingok, Alaska, or Kwig, located in the far reaches of Central Yup’ik near the Bering Sea.  On Memorial Day, Secretary Shinseki visited Kwig to meet and honor living members of the Alaska Territorial Guard, who served bravely during World War II.  No roads lead to Kwig, so the trip wasn’t easy.  We hopped on a flight in Anchorage, and connected in the small town of Bethel – about 1,000 miles roundtrip. When we finally landed on the dirt landing strip in Kwig, villagers on all-terrain vehicles appeared from all over to give us rides to the village center.

You hear about long trips beforehand, but the actual flights tell the simple story – Veterans in Kwig, and in rural areas all across the country, do not live near a VA facility. People in rural areas, both in the VA system and outside of it, face major challenges, including the shortage of health care resources and specialty care providers. During these trips, we experienced the distanced that, in recent years, spurred VA to make a dramatic shift for Veterans in rural areas. VA currently has 400 health clinics in rural areas, and we’re expanding outreach clinics, Vet Centers, even mobile Vet Centers to enroll Veterans and provide readjustment counseling.

Simply put, with these changes, many Veterans may not need to drive as far for a check-up.  To coordinate the efforts, VA established the Office of Rural Health, which has already funded over $500 million for more than 500 projects, including home based primary care and intensive case management.  In other places, VA is partnering with private health care providers and connecting facilities through new means like telehealth technologies to keep patients closer to home. Over the next several years, we’ll continue to invest in solutions that bridge the gap between VA Medical Centers and rural Veterans. Access requires creativity.

The trips I’ve taken with Secretary Shinseki have reinforced that the department is dedicated to improving health care for Veterans who live in rural, remote, even inaccessible areas.  While we have made considerable progress, there is still much work to do.  Whether in Montana or Alaska, North Dakota or Guam, Secretary Shinseki is unequivocal when it comes to rural access: Veterans have earned and deserve VA care and services wherever they live. He is committed to making that happen – even in the most remote parts of the country.