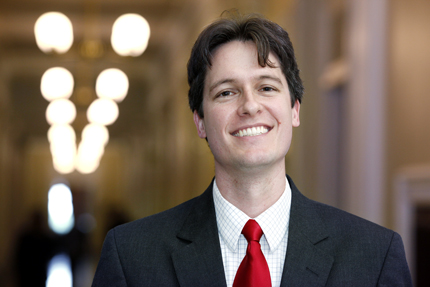 The Virginia General Assembly goes into session once each year, for 45–60 days. In a whirlwind of activity, the 140 legislators file thousands of bills, which wind their way towards becoming law in a process that can be confusing to legislators, and is downright baffling to citizens. The proceedings are covered by a dwindling press corps, the once-robust crowd of reporters having been reduced to just a few who reliably show up each day. The legislature has a website where the state’s eight million citizens can try to keep up with the goings-on, but the decade-old site often leaves people scratching their heads. Legislators’ voting records are nowhere to be found, no video of the proceedings is available, and the search engine works badly. It can be dispiriting for folks trying to find out what their legislators are doing.

As both a programmer and a follower of Virginia politics, I knew that there was a better way. I spent nights and weekends throughout the summer and fall of 2006 creating the sort of website that I wanted. The result, five years later, is Richmond Sunlight, a non-profit, non-partisan website that has changed how many people interact with and learn about their legislature.

Visitors are put at ease by a friendly, accessible color scheme and layout, by designer John Athayde. People can comment publicly on any bill, and robust discussions about the merits of legislation frequently follow, with legislators stopping by to answer questions or defend their proposals. Groups can create public portfolios of legislation that they’re following, with their own commentary and analysis about that legislation. Every legislator’s voting record is available to be browsed through, or downloaded as a spreadsheet for analysis. Video of the entire session is provided, indexed by bill and legislator, allowing anybody looking at a bill to instantly watch an automatically assembled highlight reel of every moment of floor discussion about it. A robust application programming interface (API) allows software and website developers to incorporate legislative data into their own applications. All of these features and more add up to a website that’s visited by over a hundred thousand Virginians each year.

I am honored to be named a Champion of Change by the White House. I confess that this honor brings me a measure of guilt. Richmond Sunlight is something that I created for fun, and it’s something that I continue to run because I enjoy it. Some people knit, some play music, others play tennis—I make websites. It’s incongruous to receive an award for something that brings me such great personal satisfaction.

My fellow award winners, with whom I was lucky enough to be able to spend two days in Washington D.C., have poured their hearts and souls into incredibly important work—collecting asthma data, making it easy for local governments to put government data online, even redesigning the entire Federal Register. Indeed, I am outclassed by these people, and I’m grateful to have been brought into their company. In the time that we spent together, I think that we all found ways in which we could work with one another, to the benefit of each of our projects. The value of spending time together was perhaps greater than the value of spending time at the White House.

Receiving a Champion of Change award is a credential unlike any other. An award from the White House opens doors, demonstrates merit, proves mettle. Both Richmond Sunlight and I will benefit from it in ways large and small for years to come. My hope is that this will light the path for legislatures and independent groups in other states around the nation, to show them that there is a better way—an easy way—to make the political process more open and more inclusive.

Waldo Jaquith, a Web site developer, political pundit and currently the Web Developer at The Miller Center of Public Affairs at the University of Virginia, is an open government activist.