Chris recognized the power of the Fighting Irish signature apparel by the excitement generated in the stands when they took the field. He also saw “The Shirt” bring people together far away from the college gridiron. Strangers in ND swag became instant comrades in the malls and on street corners around the world. 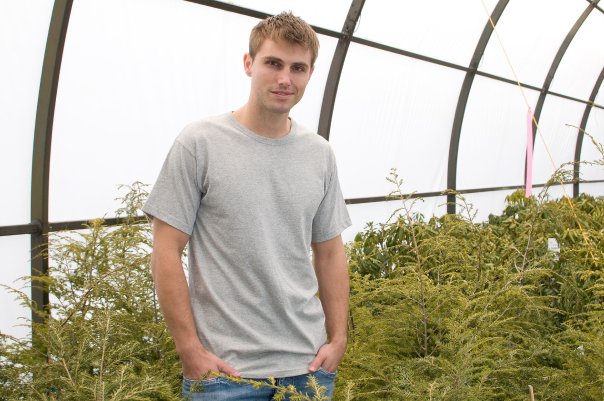 Chris Yura founded SustainU, an environmentally-friendly clothing line for colleges and universities, and has grown the company quickly in just a few years.

After graduating from the University of Notre Dame in 2003, Chris went to New York City looking to get his career off the ground.  He became a professional model and learned, on the runways and in photo shoots, about the emotional power of clothing.  As a model, Chris learned about the sourcing and manufacturing of apparel in addition to the international clothing market and sustainable fashion movement. He was frustrated to learn about the misleading character of the market for “green” clothing.  Putting all of these experiences together Chris saw an opportunity to do something on his own.

Chris hoped to create a more authentic garment, one that embodied the social, environmental and economic values with which he was raised.  With a small loan from his parents, he moved to North Carolina, a vibrant textile region, to learn how to make quality, affordable apparel.  He brought this knowledge back to his home state of West Virginia and in June of 2009, at the age of 28, Chris founded SustainU, a clothing line that produces environmentally-friendly apparel for colleges and universities.  SustainU’s mission is predicated on the message of social, environmental and economic sustainability, changing clothing to change our world and reinvigorate America’s manufacturing sector.

In just a couple of years, SustainU has grown quickly to nine full-time employees operating in four factories. SustainU apparel is made from 100% recycled materials in the southern textiles regions of the United States; the business model has created 400 textile jobs while reducing waste and environmental stress in West Virginia, North Carolina, and Tennessee.

“We are living in a very unique time in our country's history. With the help of education and activism through social networking and other forms of mass communication, there is a huge amount of momentum behind the creation of 'green technology' to preserve and enhance our global way of life, while also building back the working communities in the USA,” said SustainU’s CEO and Founder Chris Yura. “Sustainable methods in manufacturing can revolutionize our economy in America and rehire those who have been laid off due to the outsourcing of labor. With green technology, we can level the global playing field.”