President Obama on Common Sense Steps to Grow the Economy

August 8, 2011 at 6:00 PM ET by Nikki Sutton
Twitter Facebook Email
Summary:
The U.S. remains a AAA country, with the resources and the will needed to work out our differences and move forward

Watch the President's full remarks on the credit downgrade here.

This afternoon, while speaking to the press from the State Dining Room, President Obama addressed the news from Friday that the United States received a downgrade by one of the credit rating agencies:

The fact is, we didn’t need a rating agency to tell us that we need a balanced, long-term approach to deficit reduction.  That was true last week.  That was true last year.  That was true the day I took office.  And we didn’t need a rating agency to tell us that the gridlock in Washington over the last several months has not been constructive, to say the least.  We knew from the outset that a prolonged debate over the debt ceiling -- a debate where the threat of default was used as a bargaining chip -- could do enormous damage to our economy and the world’s.  That threat, coming after a string of economic disruptions in Europe, Japan and the Middle East, has now roiled the markets and dampened consumer confidence and slowed the pace of recovery.

The President discussed the need to tackle our deficits over the long term through tax reform that asks those who can afford it to pay their fair share and modest adjustments to health care programs like Medicare. Though the issues of debt and deficits have dominated much of the recent conversation in Washington, the most immediate concern of most Americans is job creation and growing our economy. That is why President Obama laid out some common sense steps that can be taken right away to spur economic growth such as extending the payroll tax cut and unemployment insurance:

Specifically, we should extend the payroll tax cut as soon as possible, so that workers have more money in their paychecks next year and businesses have more customers next year.

We should continue to make sure that if you’re one of the millions of Americans who’s out there looking for a job, you can get the unemployment insurance that your tax dollars contributed to.  That will also put money in people’s pockets and more customers in stores.

In fact, if Congress fails to extend the payroll tax cut and the unemployment insurance benefits that I’ve called for, it could mean 1 million fewer jobs and half a percent less growth.  This is something we can do immediately, something we can do as soon as Congress gets back. 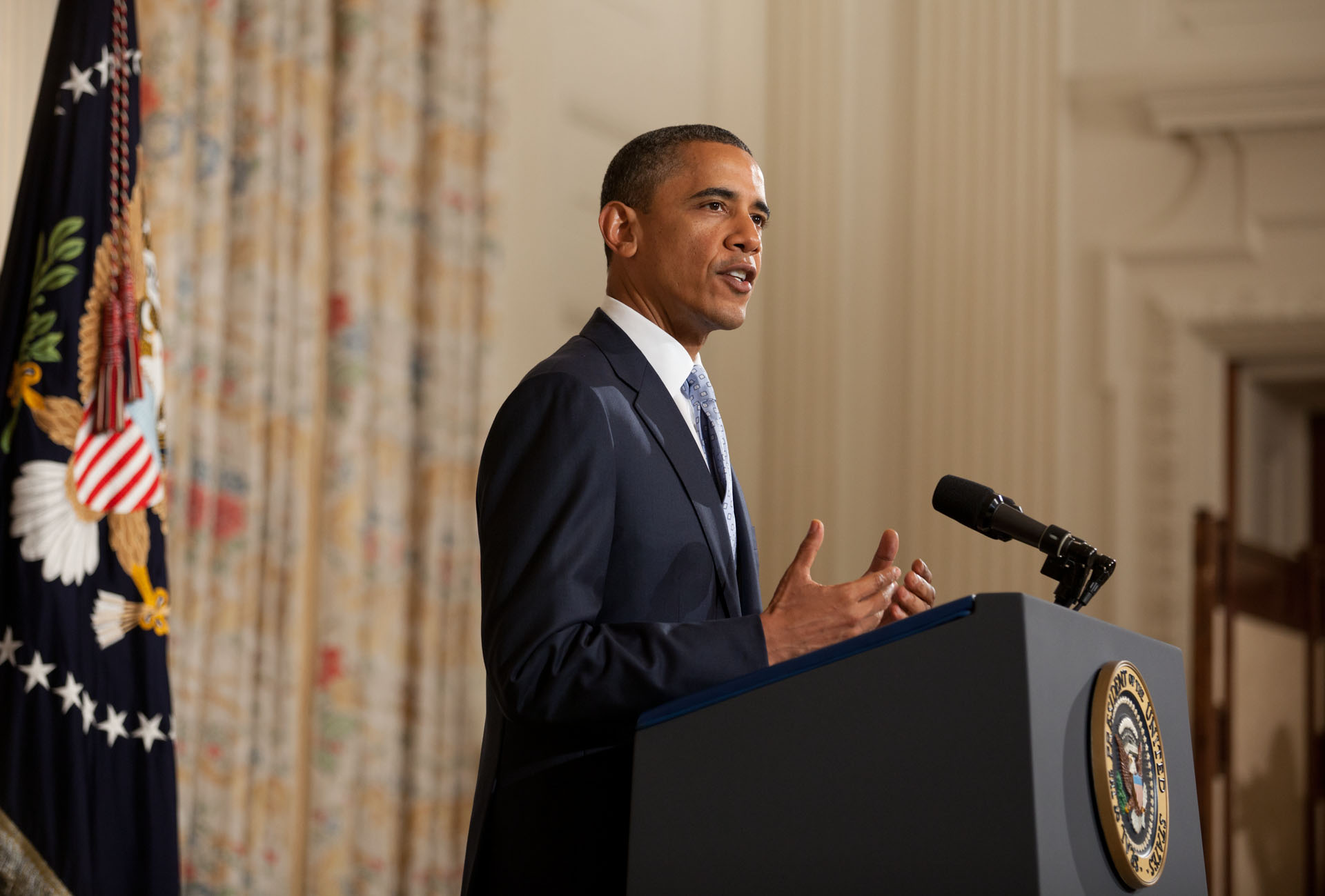 President Barack Obama delivers a statement to the press in the State Dining Room of the White House, Aug. 8, 2011. (Official White House Photo by Chuck Kennedy)

Despite the economic hardship and challenges we face as a nation, the President is hopeful about our future:

No matter what some agency may say, we’ve always been and always will be a AAA country.  For all of the challenges we face, we continue to have the best universities, some of the most productive workers, the most innovative companies, the most adventurous entrepreneurs on Earth.  What sets us apart is that we’ve always not just had the capacity, but also the will to act -- the determination to shape our future; the willingness in our democracy to work out our differences in a sensible way and to move forward, not just for this generation but for the next generation.

As the President said, there is no one who embodies these qualities of excellence more than our men and women in uniform. The President reflected on the 30 Americans who were lost in Afghanistan this weekend:

[N]ow is also a time to reflect on those we lost, and the sacrifices of all who serve, as well as their families.  These men and women put their lives on the line for the values that bind us together as a nation.  They come from different places, and their backgrounds and beliefs reflect the rich diversity of America.

But no matter what differences they might have as individuals, they serve this nation as a team.  They meet their responsibilities together.  And some of them -- like the 30 Americans who were lost this weekend –- give their lives for their country.  Our responsibility is to ensure that their legacy is an America that reflects their courage, their commitment, and their sense of common purpose.