From "Senioritis" to Sustainable Solutions

August 8, 2011 at 2:10 PM ET by Ari Matusiak
Twitter Facebook Email
Summary:
Inspired by a random fact they learned in class, Nikhil Arora and Alejandro Velez set out to test their luck growing gourmet mushrooms from 100 percent recycled coffee grounds. Years later, the friends now have a thriving sustainable food business: Back to the Roots.

Nikhil Arora and Alejandro Velez sat in their Business Ethics class at UC Berkeley on a beautiful California spring day.  They paid sporadic attention in class, satisfied with their job offers in the investment banking and consulting fields and suffering from “Senioritis.” That day, however, a random fact brought up in class caught their attention.  Gourmet mushrooms could potentially be grown on 100 percent recycled coffee grounds.  Complete strangers, in a class of almost 100 students, the two were put in touch by their professor after separately reaching out to him for more information, both intrigued by the waste-to-wages and waste-to-food model.  Filled with curiosity, they got together to work. A fraternity kitchen soon became a mini-science experiment with hopes of exploring the unknown world of gourmet mushrooms and recycled coffee grounds. 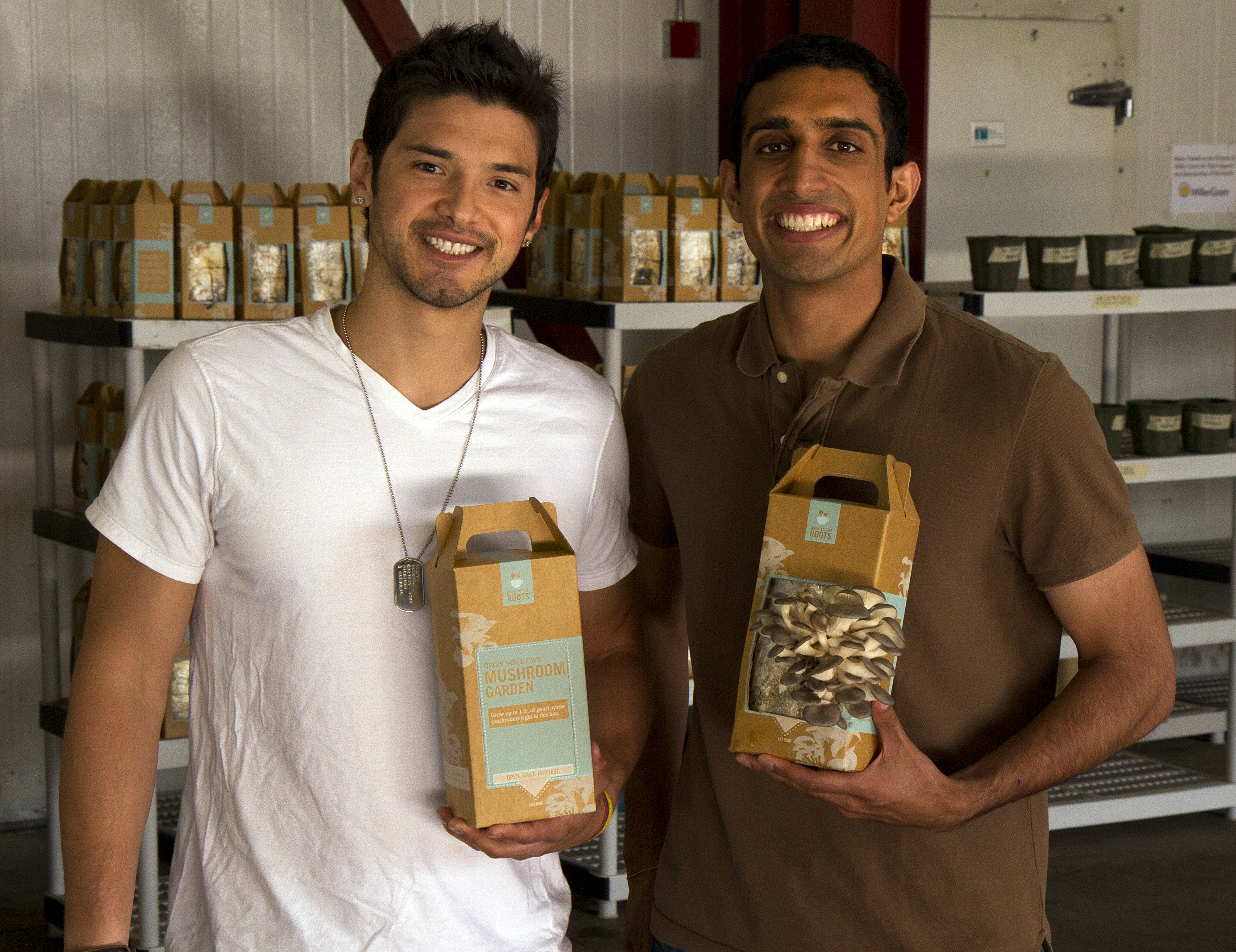 Nikhil Arora and Alejandro Velez, founders of Back to the Roots, have grown their sustainable food business without any venture capital or equity funding.

Their first nine experiments became contaminated within a few days, but the tenth batch produced gorgeous oyster mushrooms.  These less-than-gourmet mushroom connoisseurs needed to see how their mushrooms measured up to the rest of them.  Surely, the head chef at the best restaurant in town, Chez Panisse, would be a worthy critic.  The chef began to sauté their mushrooms and placed a large spoonful in his mouth. His face instantly lit up as he said “whoa, these are delicious!”  It was then that they both realized they were on to something.

A few weeks later, they received a small grant of $5000 from their Chancellor.  They decided to take a leap of faith and turned down their investment banking and consulting job offers to become full-time urban mushroom farmers.  Thus, in the spring of 2009, Back to the Roots was born.  After six months of experimenting, they sold their first 3.14 pounds of mushroom to the Berkeley Whole Foods in October of 2009.  Their production quickly grew to 500 pounds a week and spread to the entire Northern California region.  Customers fell in love with the idea of growing sustainable gourmet mushrooms, inspiring Nikhil and Alejandro to launch the Grow-Your-Own Mushroom Garden.  With this new initiative, anyone could sustainably grow their own gourmet mushrooms in as little as ten days…right out of a little brown box, and all on recycled coffee grounds.

As their business flourished, the Back to the Roots family grew to 17 people, each committed to bringing local, sustainable food to everyone across the country.  Their production is 100 percent sustainable and they accomplished their growth without any venture capital or equity funding.  The words Hustle, Family, Passion and Universal Happiness cover their company wall, the four values that drive them to grow, one store at a time.

Back to the Roots continues to grow and has hopes of reaching more national retailers in the near future with their Grow-Your-Own Mushroom Gardens and new products. As Back to the Roots spreads from coast to coast, they continue to promote sustainability, healthy communities and green development, inspiring people to grow food at home. Nikhil and Alejandro began their journey growing mushrooms in the dark.  In creating a viable and successful business, they have the opportunity to help bring the issues that matter to them - and some delicious food - to light.