Michael Hart knows that America- and the rest of the world- will always have trash. Nevertheless, he started Sierra Energy to fulfill his goal of seeing a zero-waste country. In fact, Mr. Hart has higher visions for everyday items like used water bottles and empty cardboard boxes that don’t include a landfill, but instead the creation of jobs, the fueling of our economy, and the transformation of America into a greener, waste-free nation. 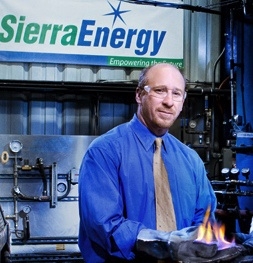 Michael Hart, president and CEO of Sierra Energy since he founded the company in 2004, has been named an "Environmental Hero" by the Environmental Protection Agency for his work. (Photo by Kyle Monk)

Sierra Energy originally set out to develop more efficient ways to produce iron. During early tests, though, the team realized that their process could be better used to convert waste into energy with just three byproducts: liquid metal, clean fuel, and a harmless stone often used to make concrete. Even more compelling was that they were simply expanding on technology that had existed for decades. Mr. Hart decided to focus on scaling this technology for practical applications around the world. During his research, he realized that his company’s findings could be used in almost any setting, at low costs, and with almost any type of waste. Most importantly, though, deploying it would lead to the creation of non-exportable “green” jobs, getting skilled Americans working again and generating new learning opportunities for the future.

Mr. Hart and Sierra Energy have found a way to convert something that the world has ample amount of- trash - into something the world can do an ample amount with- clean energy. As a result, the Environmental Protection Agency has named Mr. Hart an “Environmental Hero.” “We have a choice about energy,” he says, “we can either buy polluting oil from overseas or we can profitably create jobs in America by creating cleaner, more efficient energy at home.” From clearing expanding landfills to enabling battlefield soldiers to produce fuel from the waste they already generate, the possibilities of this technology are untold. The beneficial results of a company harnessing existing technology, while innovating for the future, though, are indisputable.