August 9, 2011 at 4:18 PM ET by Cecilia Muñoz
Twitter Facebook Email
Summary:
Cecilia Muñoz, White House Director of Intergovernmental Affairs, shares her experience participating in a small business matchmaking event organized by the Department of Defense and the offices of Orlando Mayor Buddy Dyer and Senator Bill Nelson. The event, which took place on August 8th in Orlando, Florida, promoted greater access to federal contract opportunities for small business and included 700 attendees, 475 of which were small businesses. 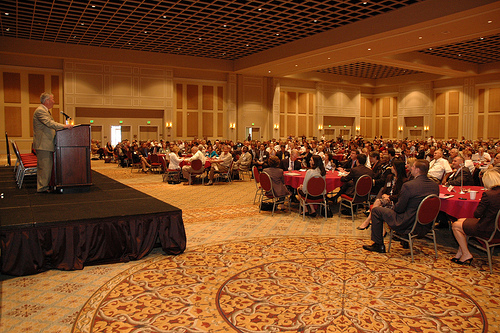 Some 700 people, including 475 small businesses, participated in a DOD-led small business procurement summit in Orlando, Florida on Monday, August 8, 2011 designed to give small businesses insight into how to do business with the federal government. (Photo courtesy of the City of Orlando.)

The Federal government procures over $530 billion in goods and services on an annual basis. President Obama is committed to ensuring that small businesses, including four key socioeconomic small business groups — small disadvantaged, women-owned, service-disabled veteran-owned, and HUBzone small businesses—have greater access to federal contract opportunities. As President Obama has said many times: “If we want to keep America moving forward, we need to keep investing in our small businesses.”

As part of that commitment, the White House asked all the major federal agencies in January to conduct two high-level business-to-business matchmaking events around the country. Since then, a total of 18 Cabinet and Senate-confirmed administration officials have participated in 16 small business matchmaking events around the country, including in Atlanta, San Antonio, Huntsville, and Detroit. Over 6,000 small business owners have already participated in these events. 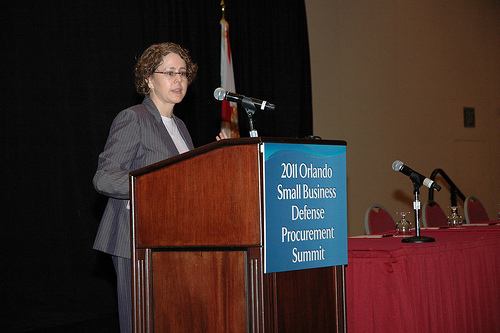 On Monday August 8th we held one more of these events in Orlando, Florida, and I had the privilege to be a part of it. In this case, the Department of Defense (DoD) partnered with the offices of Orlando Mayor Buddy Dyer and Senator Bill Nelson, and Ashton Carter, Under Secretary of Defense for Acquisition, Technology & Logistics, delivered keynote remarks. The gathering was a really terrific opportunity for small business owners to meet and interact with industry representatives and government contracting officials. And in addition to the matchmaking aspects of the program, panel discussions were held with government and industry representatives to help the 700 attendees,including 475 small businesses, gain insightsinto how to do business with the Department of Defense and cultivate business-to-business relationships more effectively with prime contractors.  I was fortunate to be able to meet with minority business owners during my visit.  It was an important opportunity to hear firsthand about their experiences with the procurement process and to learn what we need to know to make sure we are as effective as possible in helping small businesses create jobs.  We still have more work to do, but I was pleased to hear one business owner say that he has never seen this level of receptiveness or energy from the federal government.

So far, these matchmaking events have taken place in 12 U.S. Cities covering the Mid-West, Mid-Atlantic, South, South East and West. And they’re starting to bear fruit with more and more agencies connecting with new vendors. Next on the calendar, New Orleans on August 15th, Columbia on August 23rd, San Francisco on September 1st, and Albuquerque on September 15th. Keep up with us here on whitehouse.gov for details as we get closer, and if you know a small business owner, let them know.