A Step Toward Better Housing and Economic Development in Indian Country

Ed. Note: Cross-posted from The HUDdle.

I was in Albuquerque yesterday to announce $28 million in HUD funding to help rural communities across the country tackle their toughest housing and poverty challenges. I was joined by tribal leaders in New Mexico as I shared that more than half of the funds, $15.6 million, went to 27 Native American tribes or communities across the nation.

I’m not surprised there was a strong showing of communities in Indian Country finding innovative solutions to address some of our most difficult challenges. Economic development is particularly crucial in Native American communities.

The Rural Innovation Fund Grants promote an entrepreneurial approach to addressing affordable housing and economic development in rural areas – and at the heart of this movement are Native American tribes and leaders. The grants will lead to nearly 800 new homes and more than 650 jobs nationwide, and leverage an extra $18 million in investments. We know each tribe and American Indian community is different, facing different challenges and opportunities. That is why the new Rural Innovation Fund offers flexible resources that allow communities to address either housing or economic development needs, or both. 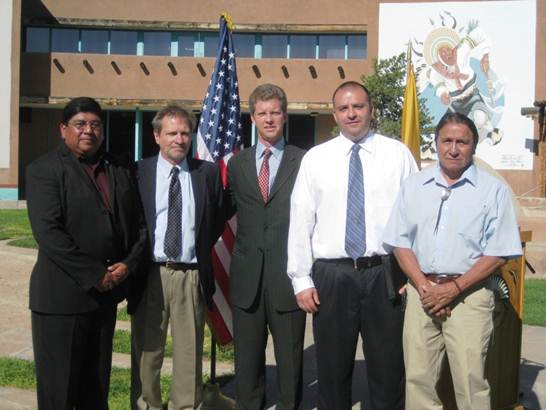 For example, the Bear River Band of Rohnerville Rancheria in California will improve infrastructure at the mixed-use Tish Non development, which includes a community center, a rec center and an assisted living center in addition to businesses. The Northern Pueblos Housing Authority in New Mexico will rehab dilapidated historic adobe homes, creating green construction training and job opportunities in the process. The Lac Courte Oreilles Band of Lake Superior Chippewa Indians in Wisconsin will create a visitors center to promote tribal businesses and provide a venue for the work of local crafts and tradespersons.

After the grants were announced, I had a chance to gather with two dozen tribal leaders at the Indian Pueblo Cultural Center in Albuquerque, hosted by the All Indian Pueblo Council chaired by Chandler Sanchez. We discussed HUD’s community and economic development efforts in rural tribal communities, affordable housing, and tribal government partnerships with the federal government on key housing issues.

As we take a step forward in rural America, I have faith we take a leap forward toward better housing and improved economic development in Native American communities.

Shuan Donovan is Secretary of the Department of Housing and Urban Development.