Suicide Prevention at the Community Level

August 30, 2011 at 4:45 PM ET by John Madigan
Twitter Facebook Email
Summary:
John Madigan, President of the Board of Directors for SPAN USA, addresses what communities are doing to prevent suicide. 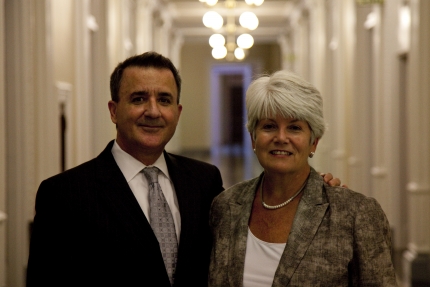 President Obama recognized the work of the American Foundation for Suicide Prevention and its Suicide Prevention Action Network (SPAN) with a Champions of Change Award last week at the White House. I was honored to be part of a conversation between Administration officials and suicide prevention and education community leaders from around the country. Our conversations clearly showed that behavioral health is an essential part of everyone’s health, prevention efforts work, and treatments for depression can be effective.

I was proud to be joined at the White House meeting by a SPAN Field Advocate, Nancy Farrell from Massachusetts. Nancy lost her brother Michael to suicide. This past June, Nancy helped organize and hold an important conference in Boston on LGBT Suicide Prevention.

During the White House conversation I also thought of Mary in North Dakota, who after losing her daughter to suicide now fights every day to help other families cope with a suicide loss, and to help train her local school personnel on how to prevent suicide. I thought of Steven in Arkansas who personally met with a misinformed school board member and not only taught him how destructive cruel words can be, but also educated him about the negative impact of bullying, eventually appearing with the school board member on Anderson Cooper’s television show and heightening awareness of suicide and mental illness on a national scale. I thought of the hundreds of SPAN Field Advocates who last year collected thousands of signatures on petitions and encouraged many others to call President Obama and urge him to change the White House policy on condolence letters to military families who have lost a loved one to suicide in a war zone. By changing that discriminatory policy, President Obama took an important step toward erasing the stigma that unfortunately still persists surrounding suicide.

Every day I am proud of our SPAN Field Advocates across America who tirelessly educate their elected officials about suicide, heighten awareness in their local communities, and courageously volunteer their time to turn their personal experiences with suicide into something positive -- into a rousing and life-saving change in the way we think about suicide and mental illness in this country. Success in the war on suicide will come much like the success in the war against breast cancer, against AIDS, and now against Alzheimer’s. We will find this success by learning valuable lessons from the other successful health care battles, and working relentlessly to erase the stigma associated with seeking and receiving mental health care. We can all heed President Obama’s call to “out-innovate, out-educate and out-build,” and apply these tools in suicide prevention, education and research. Join our movement, become a SPAN Field Advocate today, at www.spanusa.org.

John Madigan is the President of the Board of Directors for SPAN USA.