Empowering Military Families and the Civilian Community to Work Together 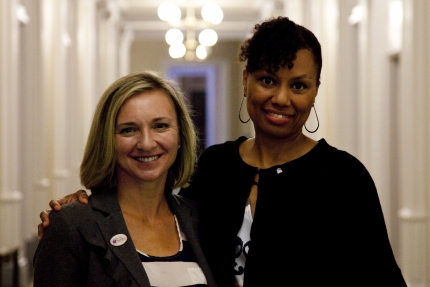 In 2009, I helped to create Blue Star Families with a group of dedicated military spouses to support, empower and connect military families to each other, to their communities and to decision makers.  As the Army spouse of an OIF combat wounded warrior, I feel a close kinship with this dynamic group of military spouses and families who experience similar issues. All too often, the greater community does not understand our sacrifices and our service to this nation. As such, Blue Star Families’ strategic focus is to bridge the gap between the military and civilian communities.  In doing so, our primary aim is to promote and foster healthy military families through the collaborative sharing of information and quality of life resources.

To be sure, Blue Star Families has exceeded its own expectations. We have struck a chord, not just with military family members hungry for support and empowerment, but also with elected officials, military leadership and corporate America seeking to hear unfiltered feedback related to “on the ground” issues that are impacting us. As military families, we appreciate the momentous sacrifice of others in our shoes; subsequently, we regularly conduct our Military Family Lifestyle Survey to glean what today’s military families truly need. From its results and our personal familiarity, we set the stage for our pioneering programming platform with novel projects like Operation Honor Cards and our groundbreaking public service announcements (PSAs) to help prevent military family suicides.

The military suicide issue is at the precipice and as we know, the families suffer tremendously. In particular, many of our Guard and Reserve members are civilian soldiers that are expected to seamlessly reintegrate back into society after deployment. Over 25 percent of the forces deployed are Guardsman and Reservists. However, the families of these soldiers are not well equipped with mental health resources to identify the warning signs and signals that could help prevent suicides or other crisis issues. Blue Star Families recognized this gap in easily accessible information for military families.  We partnered with The Creative Coalition, a not-for profit organization made up of members of the entertainment community, to develop and film the PSAs with celebrities who donated their time.  Together with the Tragedy Assistance Program for Survivors (TAPS) and Health Net, Inc., we developed several PSAs aimed at military families in crisis.  These PSAs were launched in April of this year with great reviews from Department of Defense (DoD) and Department of Veterans Affairs (VA) leadership. They will be viewed on DoD and VA channels, cable stations such as The History Channel and Lifetime, and in movie theaters across the country.

Pamela Stokes Eggleston is a Founding Member and Development Director for Blue Star Families, a national nonprofit that connects military families, and those in government, national organizations, and local civilian communities to foster a better understanding of the unique challenges of military life.