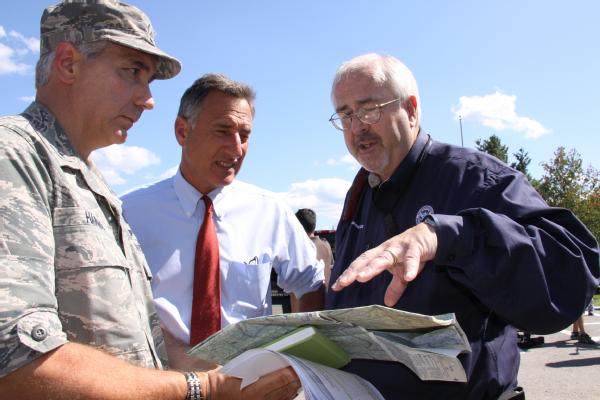 You may have heard media reports that the lead up to Irene was over-hyped and that we “dodged a bullet” – well I can tell you that while the impacts of Irene could have been much worse, there are many areas, especially in the Northeast that are still experiencing dangerous inland flooding and our state and local partners are still very much responding to this storm.

Yesterday, I visited Vermont and met with Governor Shumlin and his emergency management team, as well as Senator Sanders, Senator Leahy, Representative Welch and other local officials. Thanks to the New Hampshire National Guard, who is in Vermont helping with the flood response, we flew over some hard hit areas of the state to assess the damages, and ensure that the Governor had all the resources he needed to continue the response to the flooding that Irene has left in her wake.

We made a stop in the town of Ludlow, where the Assistant Fire Chief, who also serves as the towns Emergency Manager, showed us the damage the flash flooding had caused. While much of the water had receded, the damage has stayed behind. Getting around is still a bit of a struggle, six of the bridges around town where damaged or destroyed, but the Governor did let the town know that by yesterday evening, access to every town in Vermont would be restored (up until this point, some were only accessible by helicopter).

People often think of FEMA when it comes to disasters, but as I saw first hand in Vermont, the team was working together to respond at all levels – the federal family, state, tribal and local government, the faith-based and non-profit community, and especially the public, as neighbors across Vermont have reached out to help each other.

When we drove around Ludlow, not only did I see FEMA commodities (in this case water), being unloaded, but the towns emergency manager talked about the work that had been done to open transportation routes, and we went by a Salvation Army Emergency Response truck that was doing great work in town.

As I told the media, after we came back from Ludlow and I had time to sit down with the Governor and the Congressional delegation, we can’t work as separate entities, we all have to work together as one team – and we will be working together long after the national media leaves, to ensure that the Governors in impacted states, not just in Vermont, but up and down the East Coast, have the support they need as they continue to respond and begin to recover from Irene.

Today I will be traveling to upstate New York and New Jersey to meet with state and local officials. Check back to the blog for more updates and information.