The Future of Suicide Prevention: Changing how we SAVE Lives

September 2, 2011 at 9:08 AM ET by Daniel Reidenberg
Twitter Facebook Email
Summary:
Dr. Daniel Reidenberg, Executive Director of Suicide Awareness Voices of Education, the Managing Director of the National Council for Suicide Prevention and the US Representative to the International Association for Suicide Prevention, talks about his experience at the White House Champions of Change roundtable. 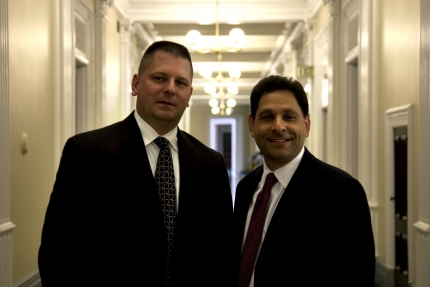 Since I was a young boy I wanted to become a doctor so that I could help people.  I thought if I could help even one person get through the worst of thoughts, emotions and behaviors, it could help change the world.  So I set out to do just that.  Seeing the pain, anguish, and struggles of people afflicted with mental illnesses gives a person a perspective on life not everyone has.

Over my 25 year career in the mental health and chemical dependency field, I, like many others, have seen and heard a lot.  The worst imaginable darkness that exists within our world, and at times within our minds and souls from brain illnesses, is hard to bear.  What has impacted me most, however, is the staggering impact that that suicide has on families, friends, classmates, co-workers, and communities as a whole.  Even the mere word suicide invokes the deepest of fears among the loved ones of those who suffer.  Today, I know that when it comes to suicide, saving one person does save the world.

Tragically, there are more than 34,000 deaths by suicide every year in America.  Despite ours being the most technologically, scientifically and medically advanced society in the world, the number of suicides in America has increased each year of the last decade.  Why?  What do we need to do reduce suicide in America?  How can we save more lives?  These are the questions I live and breathe every day.  These are the things that we need to change in order to save lives.

SAVE - Suicide Awareness Voices of Education, began in 1989 as a small, grass-roots, volunteer organization that grew into a fully staffed leading provider of public awareness, education, training, technical assistance, and resources to prevent suicide.  In 1999, then Surgeon General David Satcher called suicide a “public health crisis,” and as a result the first National Strategy for Suicide Prevention was written in 2001.  Since then more organizations have formed, more education and training has been provided, more resources have been developed, and public awareness of the issue has increased.  Yet despite it being the most preventable death there is, suicide continues to elude our full understanding and ability to prevent it.  As the Executive Director of SAVE, I believe that there must be a change in the paradigm of suicide:  how we think about it, what we do about it and how we talk about it so that we have a better chance to be there before it’s too late.

I believe that through collaboration and working together, we can save lives.  This is why SAVE co-founded the National Council for Suicide Prevention (NCSP) and I serve as the Managing Director of the NCSP.  In some fields competition fosters greater results.  However, when you are trying to prevent suicide, collaboration is the key.  Everyone in families, communities, businesses and systems need to work together.

At SAVE we believe that more research is needed to better understand who is at risk, when the risk is the greatest, and have a better understanding of what the warning signs of suicide are.  That is why along with the National Council for Suicide Prevention and the National Institute of Mental Health, we are leading the efforts to develop a national research agenda for suicide prevention.

We need to change the way people see mental illnesses.  They are medical diseases, just like any other disease, that unfortunately land in the brain and impact our thoughts, feelings and behaviors.  People with a mental illness are not weak, their character is not flawed nor do they lack morals.  They are ill and they need and deserve help, support and understanding so at SAVE we educate the public on the realities of brain diseases and the impact they have on a person.

I also believe that part of our job is to offer hope, because when someone loses all hope we know how hard it is to keep going.  So we develop unique, innovative and researched programs to help youth, parents, members of the military and veterans and we include them in the process rather than just doing it on our own and hoping it will work.  With greater understanding, awareness, reduced stigma and shame, we look forward to a time when those who might struggle with illnesses of the brain can and will get the help that they need so that they don’t end up reaching the point of suicide.

Being honored as a Champion of Change is a humbling experience and a moment I will never forget.  It reminds me of how important my work is and that we can all make a difference.  The challenges that are in front of us are enormous.  But knowing that every 38 seconds someone in America attempts to take their own life, and every 15 minutes we lose someone to suicide, the challenges must be faced.  If ever there was a time that a change was needed for one thing, this would be it.  If ever there was a cause that needed everyone’s help to make it happen, this is it.  We need to change the field of suicide prevention so that we can SAVE lives.