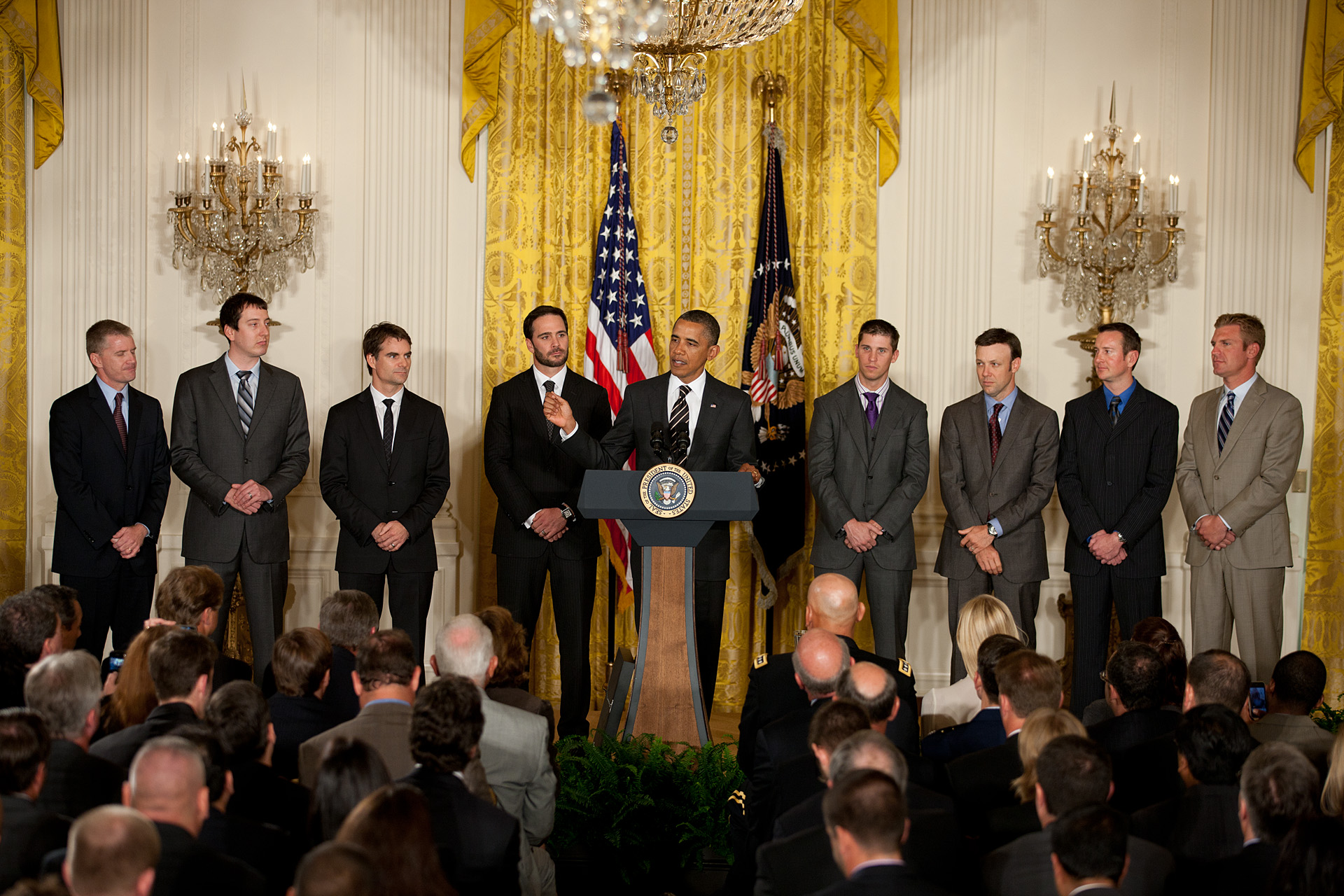 President Barack Obama delivers remarks at the NASCAR Sprint Cup Champion event in the East Room of the White House, Sept. 7, 2011. The President honored driver Jimmy Johnson for his 2010 Sprint Cup Championship and all of the drivers for their commitment to helping military families. Some of the NASCAR drivers who attended the event are Jimmie Johnson, Jeff Gordon, Denny Hamlin, Matt Kenseth, Clint Bowyer, Kyle Busch, and Jeff Burton. (Official White House Photo by Lawrence Jackson)

Today, President Obama congratulated Jimmie Johnson on his fifth straight NASCAR Sprint Cup Series Championship and welcomed other 2010 Chase for the NASCAR Sprint Cup drivers, Denny Hamlin, Matt Kenseth, Kyle Busch, Jeff Gordon, Clint Bowyer, Kurt Busch and Jeff Burton to the White House. During his remarks, the President reflected that the last time many of the drivers were at the White House he was honoring Jimmie Johnson for his third straight championship:

And that’s why Jimmie is not just one of the best drivers of all time -- he’s up there with some of the great sports dynasties.  If you think about it, only the Boston Celtics, the Yankees and the Canadiens have ever won more than four titles in a row.  And now Jimmie is breathing down the necks of Dale Earnhardt and Richard Petty for the most NASCAR titles ever, which is not bad for the son of a machine operator and a school bus driver who still has plenty of seasons ahead of him.

Jimmie’s talent has been to make a very difficult, demanding sport look easy.  But this year, the Number 48 team also showed its toughness.  They entered the last race of the Chase trailing, and ended up pulling off an extraordinary comeback.

The President also commended the contributions NASCAR has made to the country, particularly through the support of military families:

Now, what also makes NASCAR special is the difference that it makes in the lives of so many people, especially our troops and their families.  And I personally thanked all these guys for what they’ve been doing on behalf of military families, who are obviously huge fans of NASCAR.

Last month, the drivers and staff toured Walter Reed hospital, served dinner to 400 wounded warriors and their loved ones.  NASCAR has been a huge supporter of the Joining Forces program that Michelle and Dr. Jill Biden have set up to support military families.  This morning, Jimmie made a special visit to the Pentagon to spend time with folks over there.  And later this week, NASCAR will be honoring our military and first responders again in Richmond the night before the anniversary of 9/11.

Watch the video of the event below.