Vice President Biden on Remembering 9/11: "We are a Nation about Possibilities"

September 8, 2011 at 10:02 AM ET by Amy Dudley
Twitter Facebook Email
Summary:
As part of the commemoration of the 10th anniversary of the September 11th terrorist attacks, Vice President Joe Biden hosts a screening of REBIRTH, a documentary film that chronicles the lives of five people directly affected by the events on 9/11. 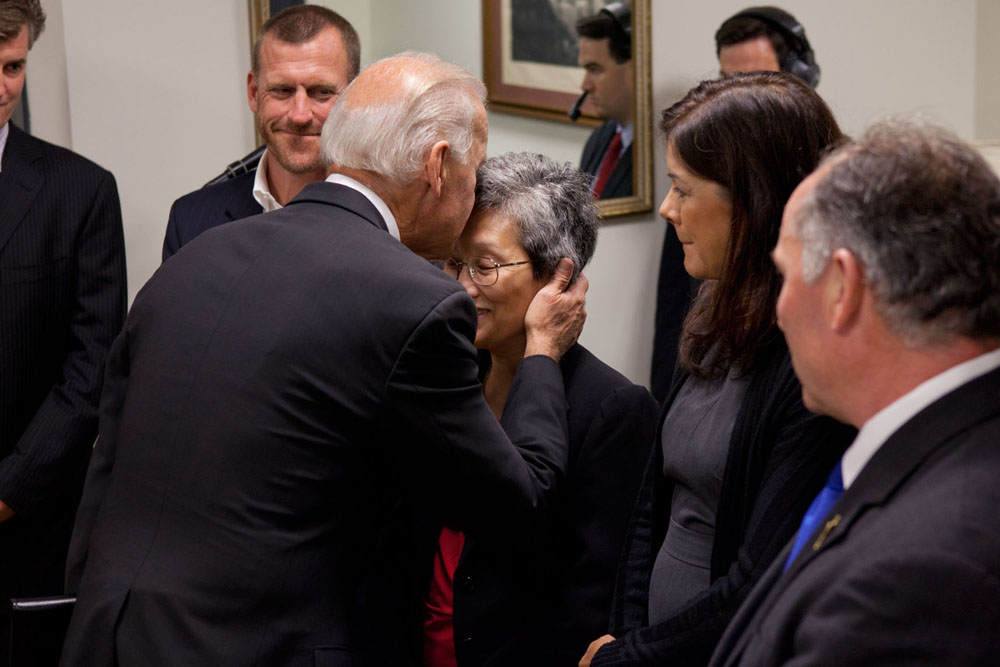 Vice President Joe Biden talks with the subjects of a documentary called Rebirth, before a screening in the South Court Auditorium at the White House, September 7, 2011. (Official White House Photo by David Lienemann)

As part of the commemoration of the 10th anniversary of the September 11th terrorist attacks, Vice President Joe Biden hosted a screening for Washington, DC area college students of REBIRTH, a documentary film that chronicles the lives of five people directly affected by the events on 9/11. The film follows a survivor from the South Tower of the World Trade Center (WTC); a firefighter who survived the collapse of the WTC but lost his best friend; a high school student who lost his mother; a young woman who lost her fiancé; and a construction worker who lost his brother, assisted with recovery efforts, and is presently helping to build the Freedom Tower.

The area college students were invited to the White House screening to reflect on the tragic events that shaped their generation and their country, and that continue to affect the world today. In remarks introducing the film, Vice President Biden emphasized the extraordinary ability of America to find renewal and rebirth even in its darkest hours and praised the courage and determination of the survivors and family members struggling to find renewal in their own lives.

Jim Whitaker, Director and Founder of Project Rebirth, “collapsed 10 years of history into the lives of five incredible people,” said Vice President Biden.  “Through this movie, he tells their stories.  But really in a way he tells us all America's story.  … It's the story of a nation of people who can – will continue for generations because we are a nation about possibilities.  I would argue it's the single most defining feature of America.  It's always about possibilities.  It ultimately always is about tomorrow.  It's always about hope.”

The Vice President also noted how the college students’ generation – the 9/11 generation – has become an integral part of the American story of rebirth as millions have dedicated their lives to serving their country in the years since September 11th, 2001.

The screening was followed by a question and answer session with Whitaker as well as four of the people featured in the documentary.