President Obama at Kennedy Center: America Does Not Give In to Fear

September 11, 2011 at 9:27 PM ET by Colleen Curtis
Twitter Facebook Email
Summary:
The President says that over the past ten years, our belief in America, born of a timeless ideal that men and women should govern themselves; that all people are created equal, and deserve the same freedom to determine their own destiny, has only been strengthened.

Watch the President's speech at "A Concert for Hope" here.

On Sunday night, after a day spent remembering those who lost their lives on September 11, 2001, President Obama and First Lady Michelle Obama attended "A Concert for Hope" at the Kennedy Center in Washington, DC. with Vice President Biden and Dr. Biden. At the event, the President spoke about how that terrible day changed us, as individuals and as a nation. But the President also talked about what has not changed in these past ten years:

Our character as a nation has not changed. Our faith -– in God and in each other –- that has not changed. Our belief in America, born of a timeless ideal that men and women should govern themselves; that all people are created equal, and deserve the same freedom to determine their own destiny –- that belief, through tests and trials, has only been strengthened.

These past 10 years have shown that America does not give in to fear. The rescue workers who rushed to the scene, the firefighters who charged up the stairs, the passengers who stormed the cockpit -- these patriots defined the very nature of courage. Over the years we’ve also seen a more quiet form of heroism -- in the ladder company that lost so many men and still suits up and saves lives every day, the businesses that have been rebuilt from nothing, the burn victim who has bounced back, the families who press on. 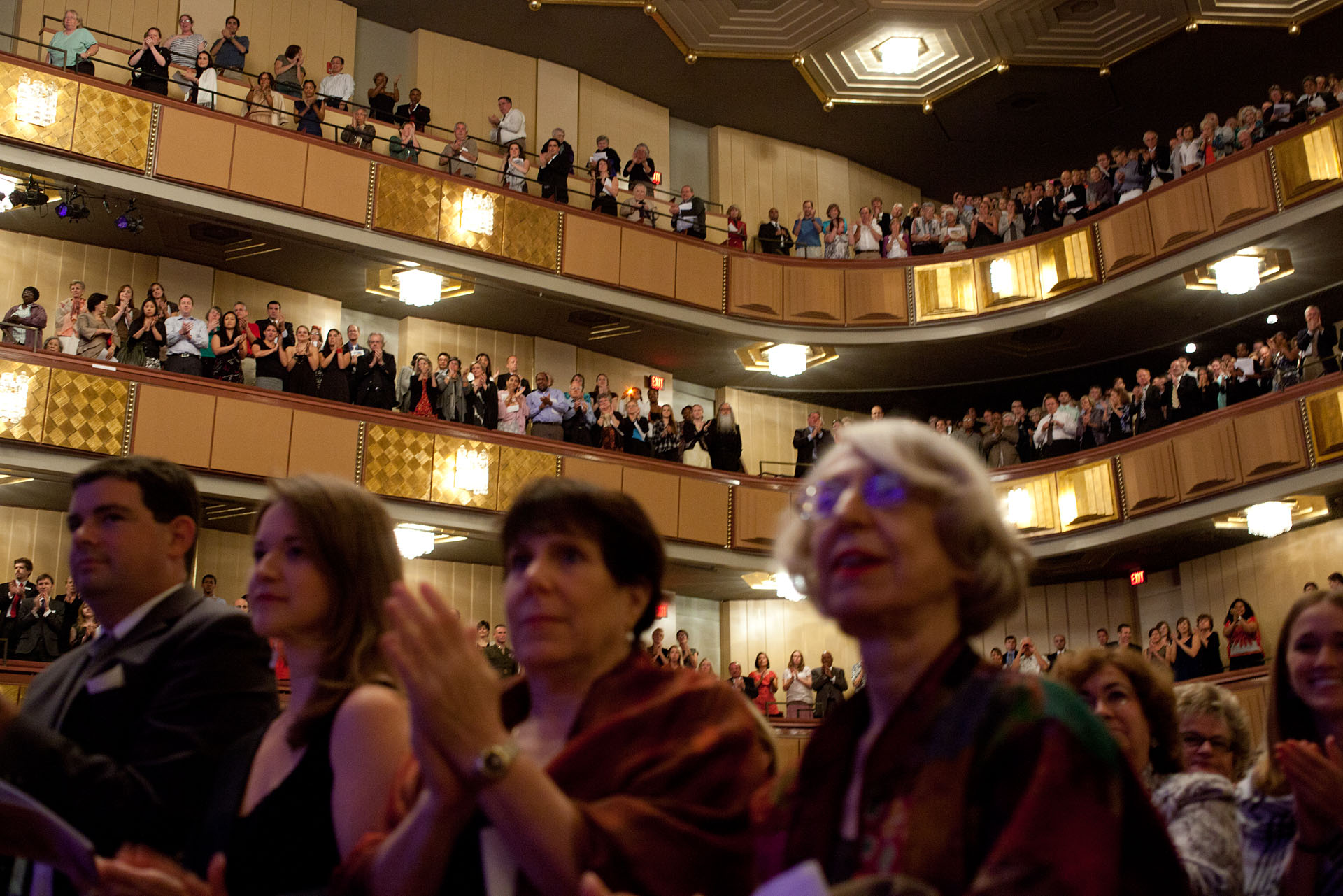 Members of the audience applaud during the Concert for Hope to commemorate the tenth anniversary of the 9/11 attacks against the United States, at the Kennedy Center in Washington, D.C., Sunday, Sept. 11, 2011. (Official White House Photo by Samantha Appleton)

The President and First Lady today visited each of the three memorials that have been erected on the sites where the planes crashed, and in his remarks at the concert, the President spoke of how these tributes will help define this generation of Americans, and symbolize the lasting legacy of both those who died at the hands of the terrorists in this country, and those who gave their lives fighting in the two wars we have waged over the past decade:

Decades from now, Americans will visit the memorials to those who were lost on 9/11. They’ll run their fingers over the places where the names of those we loved are carved into marble and stone, and they may wonder at the lives that they led. And standing before the white headstones in Arlington, and in peaceful cemeteries and small-town squares in every corner of the country, they will pay respects to those lost in Iraq and Afghanistan. They’ll see the names of the fallen on bridges and statues, at gardens and schools.

And they will know that nothing can break the will of a truly United States of America. They will remember that we’ve overcome slavery and Civil War; we’ve overcome bread lines and fascism and recession and riots, and communism and, yes, terrorism. They will be reminded that we are not perfect, but our democracy is durable, and that democracy –- reflecting, as it does, the imperfections of man -– also give us the opportunity to perfect our union. That is what we honor on days of national commemoration –- those aspects of the American experience that are enduring, and the determination to move forward as one people.

More than monuments, that will be the legacy of 9/11 –- a legacy of firefighters who walked into fire and soldiers who signed up to serve; of workers who raised new towers, and citizens who faced down their private fears. Most of all, of children who realized the dreams of their parents. It will be said that we kept the faith; that we took a painful blow, and we emerged stronger than before.