September 11, 2011 at 7:48 PM ET by Amy Dudley
Twitter Facebook Email
Summary:
He and Dr Biden also visit a DC firehouse to thank firefighters for their heroism on that fateful day

Watch the Vice President's speech at the Pentagon 9/11 Service here.

Vice President Biden and Dr. Biden marked the 10th anniversary of the September 11th attacks at the Pentagon this morning, where 184 lives were lost when American Airlines Flight 77 crashed into the west side of the headquarters of the nation’s Department of Defense. Vice President Biden joined Secretary of Defense Leon Panetta and Chairman of the Joint Chiefs of Staff Admiral Mike Mullen at the ceremony set beside the Pentagon Memorial – 184 silver benches, one for each victim, shaded by maple trees.

But before they made their way across the Potomac, the Vice President and Dr. Biden had a quick stop to make – nearby DC Fire Department Engine 20, Truck 12, where they surprised the firefighters on duty with coffee, breakfast, and words of thanks. 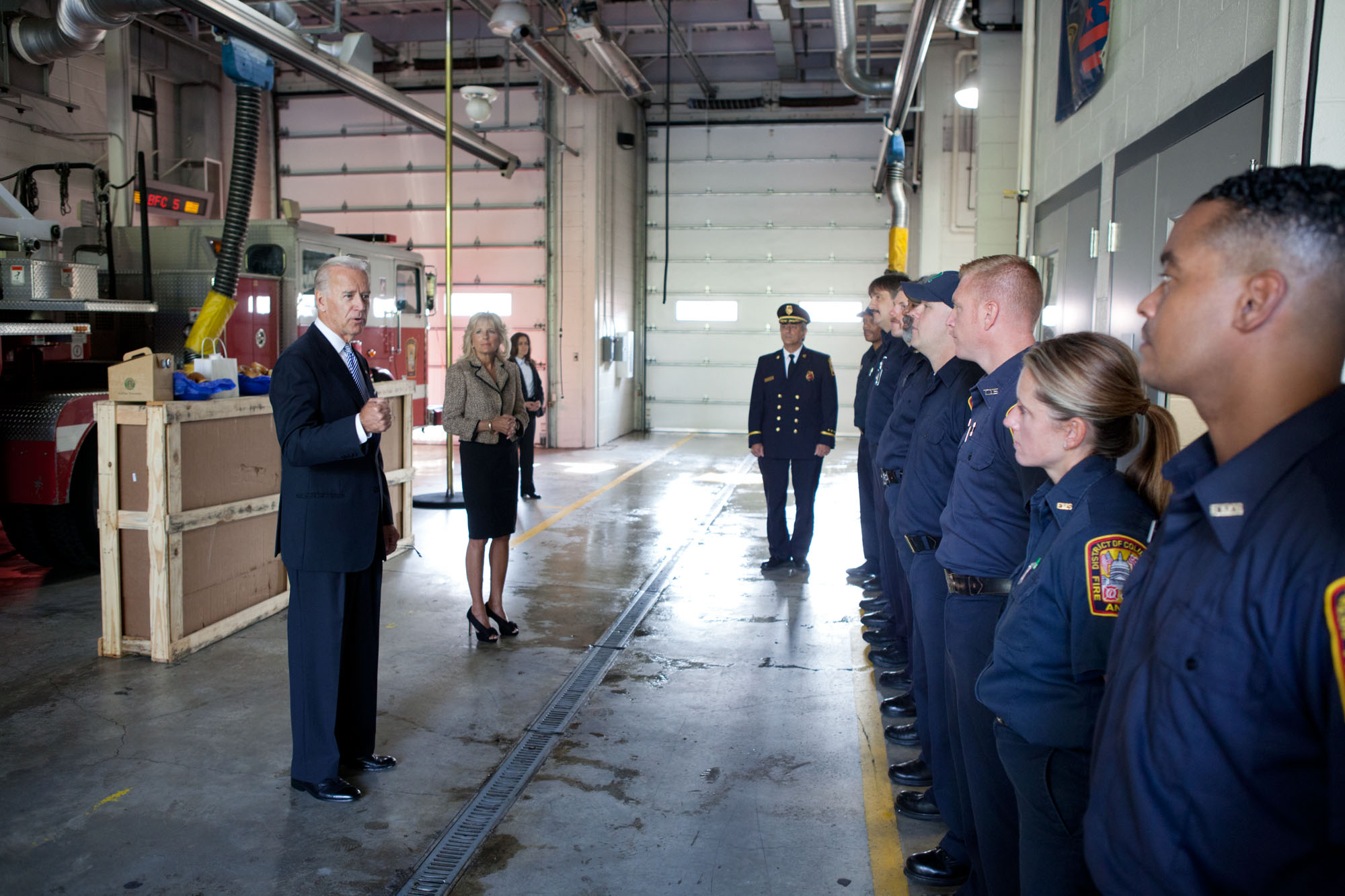 The Vice President later remarked on the heroism displayed by DCFD firefighters and other first responders from across the region 10 years ago today. “They sprang to action,” he said, “risking their lives so their friends, their colleagues and total strangers, people they had never met, might live.”

But speaking directly to the families in the audience, Vice President Biden noted something they knew in their hearts before that fateful day. “That your loved ones, those who you lost, who we now call heroes, were already heroes. They were already heroes to you.” 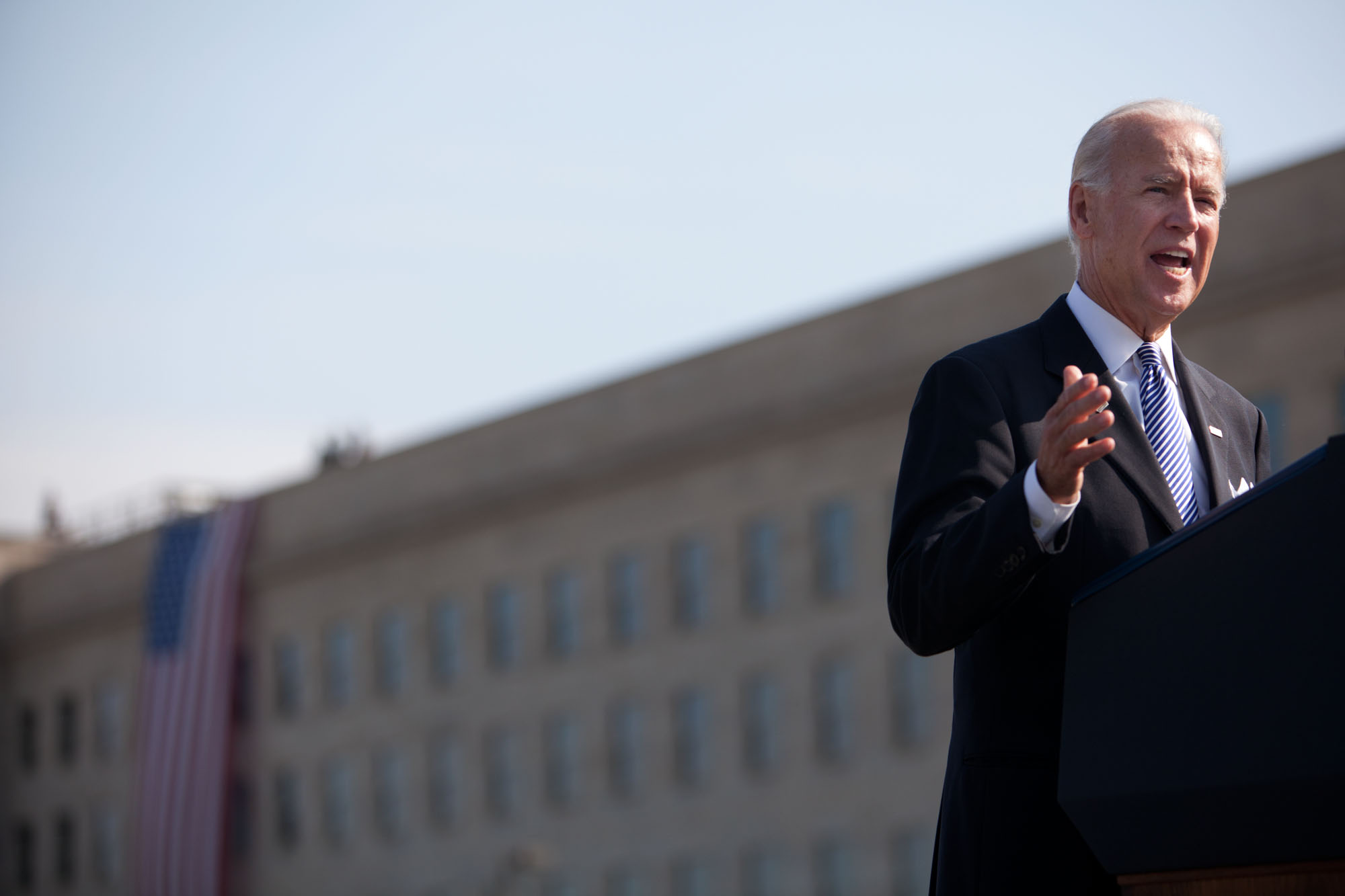 Vice President Joe Biden speaks in front of the Pentagon during a 9/11 Anniversary Service at the Pentagon, in Arlington, VA. Sep. 11, 2011. (Official White House Photo by David Lienemann)

“They were the father that tucked you in at night,” he said.  They were the wife who knew your fears before even before you expressed them.  They were the brother who lifted you up.  They were the daughter who made you laugh, and the son who made you proud. … I know in my heart, so do all of the people on this stage know, that they are absolutely irreplaceable – absolutely irreplaceable.”
Vice President Biden went on to describe how out of this tragedy came a new generation of patriots, the 9/11 generation – 2.8 million of whom joined the military since 9/11.
“The true legacy of 9/11 is that our spirit is mightier, the bonds that unite us are thicker, and the resolve is firmer than the million tons of limestone and concrete that make up that great edifice behind me,” the Vice President said. “Al Qaeda and bin Laden never imagined that the 3,000 people who lost their lives that day would inspire 3 million to put on the uniform and harden the resolve of 300 million Americans.  They never imagined the sleeping giant they were about to awaken. They never imagined these things because they did not understand what enables us, what has always enabled us to withstand any test that comes our way.”