September 12, 2011 at 1:28 PM ET by Michael L. Connor
Twitter Facebook Email
Summary:
Working to fulfill President Obama’s commitment to create jobs and improve the quality of life for Native American communities, the Department of the Interior and the Bureau of Reclamation are working to provide safe and reliable water supplies across Indian Country as we aggressively implement an unprecedented number of Indian water rights settlements.

Working to fulfill President Obama’s commitment to create jobs and improve the quality of life for Native American communities, the Department of the Interior and the Bureau of Reclamation are working to provide safe and reliable water supplies across Indian Country as we aggressively implement an unprecedented number of Indian water rights settlements. To achieve the goals we have with our Tribal partners, major water infrastructure is being developed with the potential to create thousands of jobs throughout the development and construction of these important projects.

Since our first days in office, the Obama Administration has been strongly supportive of Indian water rights settlements. With the leadership of Interior Secretary Ken Salazar, we have supported resolution of the Navajo-San Juan River claims in New Mexico, endorsed a settlement for the Duck Valley Reservation in Nevada and Idaho, and worked to enact four new settlements at the end of last year as part of the Claims Resolution Act of 2010.  This support for Indian water rights settlements is unprecedented – six settlements in the last two years – but we also recognize that there is a lot more work to do. 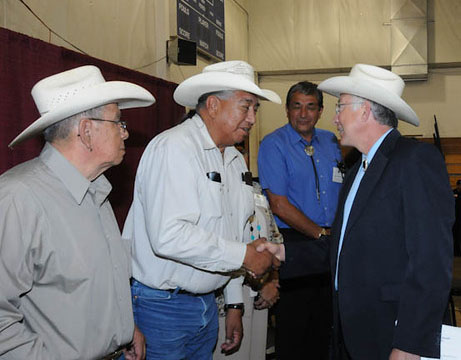 In July, Secretary of the Interior Ken Salazar met with more than 200 members of the Crow Nation to celebrate the Crow Tribe Water Rights Settlement. The pact will bring more than $460 million to the reservation to ensure safe drinking water and rehabilitate the Tribe’s irrigation project. (Photo from DOI by Tami Heilemann)

With the recent establishment of the Indian Water Rights Settlement account, we are well on our way to move forward with the four most recent settlements benefiting the White Mountain Apache Tribe in Arizona, the Crow Tribe in Montana, the Taos Pueblo in New Mexico, and the Aamodt Water Rights Settlement including the Nambe, Pojoaque, San Ildefonso, and Tesuque Pueblos in New Mexico. Interior now has more than sixty percent of its total obligations – or $445 million – available to begin implementation of this historic effort.

As this work progresses during the coming years, it is estimated that, collectively, developing the infrastructure associated with Indian water rights settlements could create as many as 6,700 new jobs. A good portion of these jobs will be in Native American communities which are struggling with some of the highest unemployment rates in the nation. Moreover, the benefits of the reliable and modern water infrastructure that these projects create will bring additional and lasting economic benefits to Indian Country. 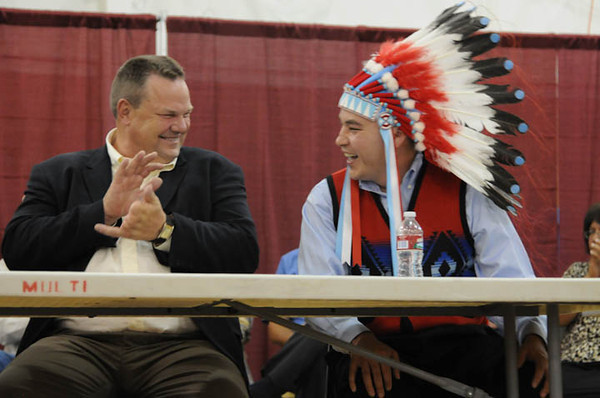 As Commissioner of the Bureau of Reclamation I am proud to have been a part of the team that worked to secure these settlements, as well as being part of an Administration that strongly supports these important goals. These agreements are unprecedented in nature but could not have been accomplished without the leadership of Interior Secretary Salazar, Deputy Secretary David Hayes, and other key members of the Administration. These settlement agreements were also made possible through the creativity and commitment of Capitol Hill supporters such as Senators Jeff Bingaman (D-NM), Tom Udall (D-NM), Max Baucus (D-MT), Jon Tester (D-MT) and John Kyl (R-AZ).

Reports indicate that eleven percent of homes in Indian Country lack access to clean water and sanitation. Clearly, this effort – and Reclamation’s role in building the infrastructure that is part of these settlements – is absolutely critical. It will provide tribesthe foundation from which they can achieve the prosperity that exists in so many other parts of our great country. These are sound investments thataddress some of the nation’s most long-standing inequities and the Bureau of Reclamation is prepared to deliver its technical expertise and know-how to bring them to reality.

Michael L. Connor is Commissioner for the Bureau of Reclamation.