September 16, 2011 at 12:19 PM ET by Quentin Palfrey
Twitter Facebook Email
Summary:
The legislation signed by President Obama today will help companies and inventors avoid costly delays and unnecessary litigation, and let them focus instead on innovation and job creation

This morning, I had the great honor of watching President Obama sign the America Invents Act at Thomas Jefferson High School for Science & Technology in Alexandria, Virginia—a school named for the first official to issue U.S. patents.  This historic legislation will help American entrepreneurs and businesses get their inventions to the marketplace sooner so they can turn their ideas into new products and new jobs.

The America Invents Act was passed with President Obama’s strong leadership after nearly a decade of effort to reform the Nation’s outdated patent laws.  It will help companies and inventors avoid costly delays and unnecessary litigation, and let them focus instead on innovation and job creation.  Many key industries in which the United States leads, such as biotechnology, medical devices, telecommunications, the Internet, and advanced manufacturing, depend on a strong and healthy intellectual property system.

As President Obama explained in his 2011 State of the Union address:  “We know what it takes to compete for the jobs and industries of our time.  We need to out-innovate, out-educate, and out-build the rest of the world.”

On stage with President Obama was a bipartisan group of legislators who came together to pass the most significant reform of the Patent Act since 1836:  Sen. Patrick Leahy (D-VT); Rep. Lamar Smith (R-TX); Rep. Bob Goodlatte (R-VA); Rep. Jim Moran (D-VA); and Rep. Mel Watt (D-NC). Today’s bill signing shows that strong bipartisan cooperation is possible. Congress can come together on behalf of the American economy and American innovation.

The newly-signed law has a number of important transformations that will build on reforms already underway under the leadership of the US Patent and Trademark Office's dynamic Director David Kappos. The law will give the USPTO the resources to significantly reduce patent application waiting times, building on the great strides the patent office has already made, including reducing its backlog by 75,000 during this Administration even as the number of filings per year has increased.

A few months ago, Austan Goolsbee (then Chairman of President Obama’s Council of Economic Advisers) created a video explaining why reducing the backlog will help get more ideas turned into companies and jobs. The USPTO will now be in a position to implement an innovative program to speed up the processing of the patents that are likely to create good jobs right away. Under the prioritized examination process, the USPTO will offer start-ups and growing companies an opportunity to have important patents reviewed in one-third the time with a new fast-track option that has a guaranteed 12-month turnaround.

The program builds on the Green Technology Pilot program that accelerates patent applications involving reduced greenhouse gas emissions and energy conservation — at no cost to the inventor. More than 2,407 petitions have been granted to green technology patent applicants since the pilot began in December 2009, and USPTO has issued a total of 470 patents under the program.

Excessive litigation has long plagued the patent system.  The America Invents Act will offer entrepreneurs new ways to avoid litigation regarding patent validity, without the expense of  going to court, and will also give the USPTO new tools and resources to improve patent quality. The new law also will harmonize the American patent process with the rest of the world to make it more efficient and predictable, and make it easier for entrepreneurs to simultaneously market products in the United States and for exporting abroad. 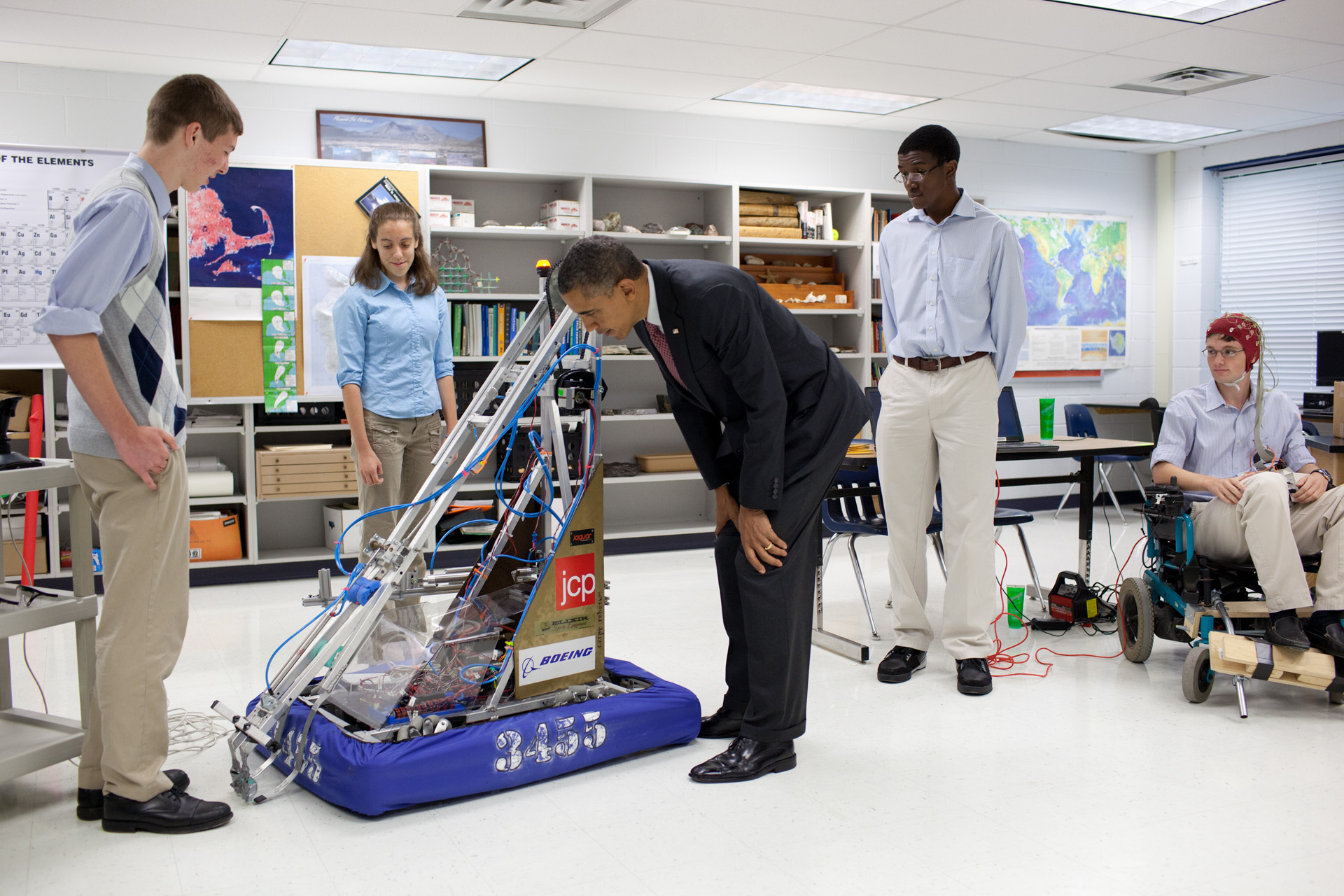 At Thomas Jefferson High School, President Obama also announced some of the additional steps we’re taking to unleash the ingenuity of America’s entrepreneurs.  The National Institutes of Health will launch a new center that will help companies reduce the time and cost required to develop life-saving drugs, and is making it easier for startups to commercialize the biomedical inventions made by NIH and FDA researchers.  In addition, the Administration will develop a “bioeconomy blueprint” to create jobs and address key national challenges in health, energy, and agriculture.

We also know that government cannot do this alone. That’s why 140 university presidents have answered the Administration’s call to action to move research breakthroughs from the lab to the marketplace.  We’re also announcing a new prize supported by the National Science Foundation and the Coulter Foundation to reward those universities that make the most progress on accelerating economic growth and job creation.

Now more than ever, the jobs of the future will spring from the inventions of today, which will be built on the foundation of a strong and balanced intellectual property system. As President Obama explained today, “We should be encouraging the entrepreneurial spirit wherever we find it.  We should be helping American companies compete and sell their products all over the world.  We should be making it easier and faster to turn new ideas into new businesses and new jobs.  And we should knock down any barriers that stand in the way.”

Have questions on the America Invents Act? Today, US Chief Technology Officer Aneesh Chopra will be answering your questions with USPTO Director David Kappos during an Open for Questions event on WhiteHouse.gov. Join us live at 5:00 p.m. EDT on Friday, September 16th. Here's how it works and how you can participate: