September 16, 2011 at 6:00 AM ET by Colleen Curtis
Twitter Facebook Email
Summary:
In an op-ed published in USA Today, First Lady Michelle Obama writes that remembering what happened on 9/11 gives us the opportunity to reflect on all that these families have endured and our obligations to them now and in the years ahead. 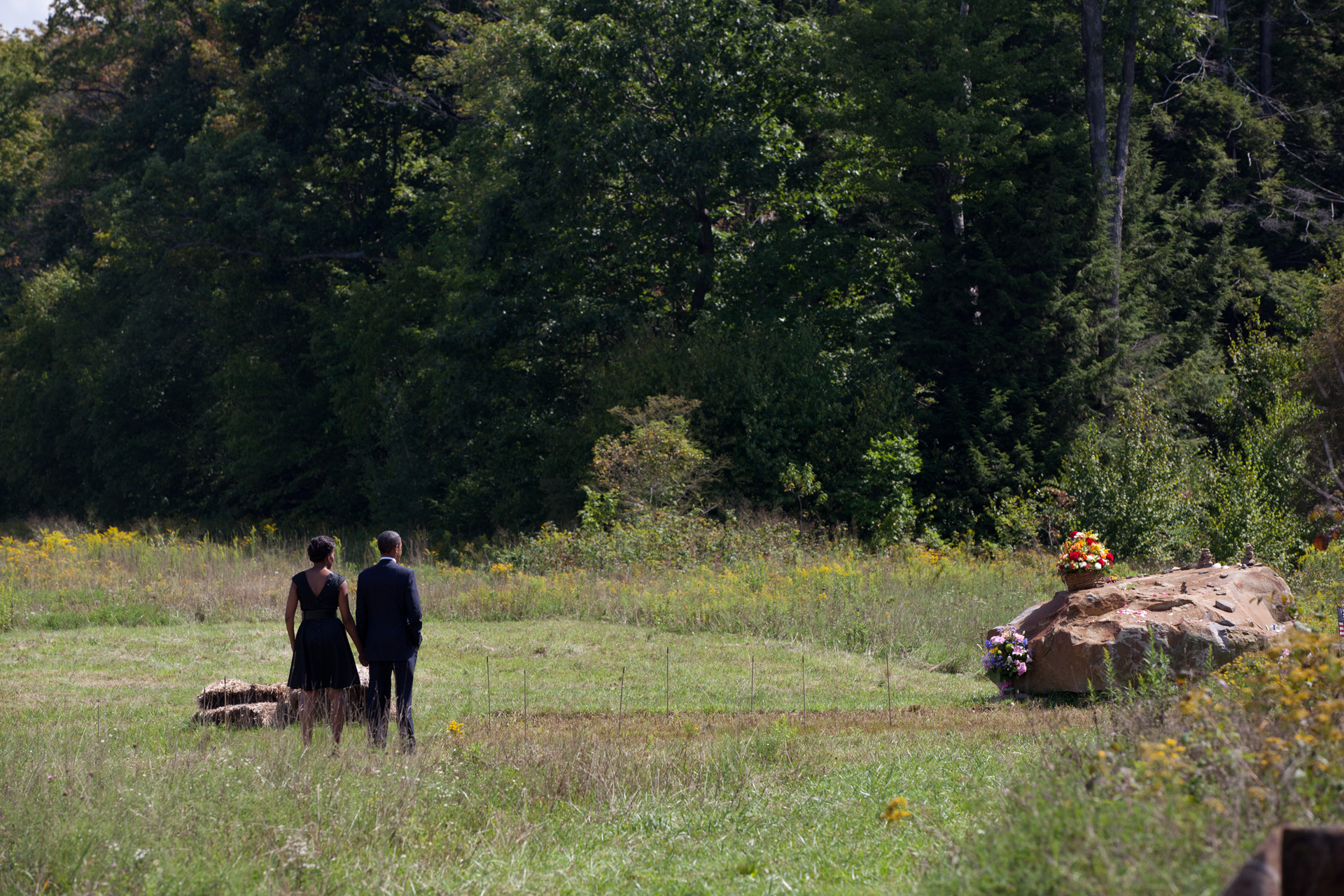 President Barack Obama and First Lady Michelle Obama visit the site where Flight 93 crashed, following a ceremony at the Flight 93 National Memorial in Shanksville, Pa., on the tenth anniversary of the 9/11 attacks against the United States, Sunday, Sept. 11, 2011. (Official White House Photo by Pete Souza)

The full text of an op-ed by First Lady Michelle Obama is printed below. The piece, published in USA Today, can be read online HERE.

Last weekend, Americans across the country joined together to remember that September morning from 10 years ago, honoring the memory of those we lost with service and reflection. And my husband and I were humbled to stand with the families and survivors on the same hallowed grounds where tragedy struck.

Yet what shines most brightly from last weekend is not memories of horror, but images of heroes; not the echoes of evil that sought to divide, but the compassion that compelled us to unite. What lasts from this anniversary is the true spirit of America that was laid bare that day and remains alive today: the courage of those who lost loved ones; the strength of those who survived; the bravery of those who ran not away from but into danger.

Those are the same qualities that live on every day among a generation of American troops and their families whose service has been defined by 9/11 and its aftermath. This anniversary also gives us the opportunity to reflect on all that these families have endured and our obligations to them now and in the years ahead.

They're the 9/11 Generation — the more than 5 million servicemembers who have worn the uniform this past decade and their families. They've rightfully earned not only the admiration of a grateful nation, but also a place in history alongside our greatest generations. More than 2 million men and women have served in the war zones, including an unprecedented number of deployments by our National Guardsmen and Reservists. We've never asked so much of our all-volunteer force.

And we've never asked this much of our military families, either. Found in nearly every community in this country, these brave family members serve right alongside their loved ones. They just don't wear uniforms. They're spouses who balance a career and a household all alone while their loved ones are deployed. They're young children who have known only life in a nation at war. They're teenagers who are all too familiar with Dad or Mom being gone for months at a time.

Yet even with all that they shoulder, these military family members are some of the most extraordinary individuals I've ever met: the moms who always seem to pick up the extra carpool shift, the kids who take on extra chores around the house, the survivors of our fallen who step up every day to serve our communities, and the veterans and wounded warriors who have served our country heroically on the battlefield and continue to contribute here at home.

No matter what the situation or how many directions they're being pulled in, our military families always stand ready to serve their loved ones, their communities and our country.

After 10 years of war, it's our turn to return their service and sacrifice with honor and appreciation of our own — and not just in word, but in deed.

That's why last spring, Jill Biden and I launched Joining Forces, a national initiative to address the unique needs and expand the opportunities of these remarkable men, women and children. Businesses can work to employ veterans and help military spouses build careers. Schools can make sure they're properly supporting military kids. Citizens can reach out to organizations who serve military families right in their communities. Every single person, group or community can do something, and we've already seen countless individuals, organizations and businesses step up to answer this call. To see what others are up to, and to join forces yourself, please visit us at www.joiningforces.gov .

I hope you do.

As we reaffirm our commitment to hold dear the heroism, strength and compassion we saw on Sept. 11, let's also pledge to keep our military families in our hearts long after this anniversary has passed. These men, women and children have served valiantly in the decade since that fateful day.

Now it's up to us to serve them as well.