Renewing the American Dream: Latinas in the White House

September 16, 2011 at 6:14 PM ET by Luis Miranda
Twitter Facebook Email
Summary:
Read about Latina women serving the President of the United States and making a difference in our country every day. 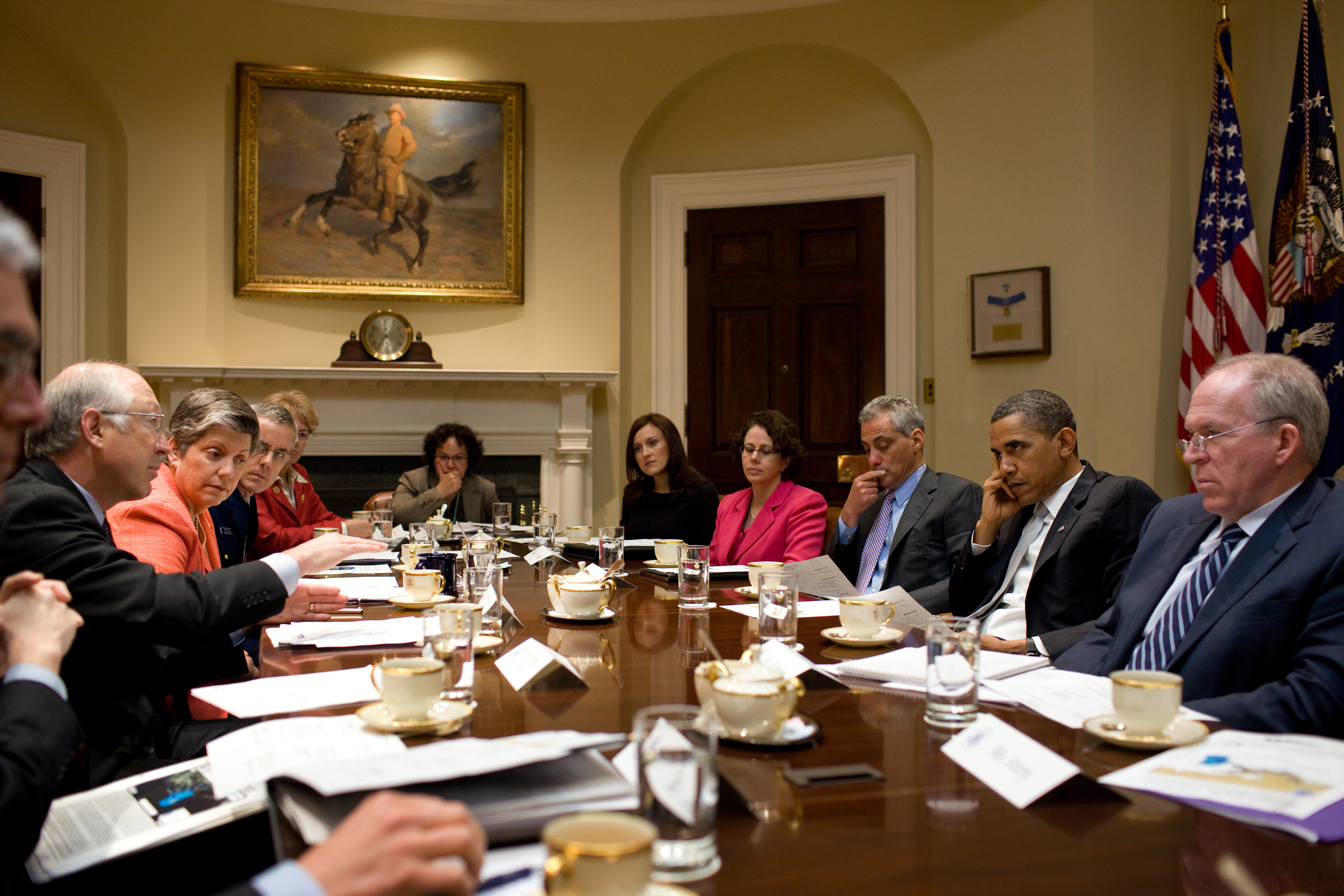 President Barack Obama meets with Cabinet members and senior administration officials to determine next steps in the ongoing effort to stop the BP oil spill, contain its spread, and help affected communities, in the Roosevelt Room of the White House, May 14, 2010, including Council of Environmental Quality Chair Nancy H. Sutley at the end of the table and Director of Intergovernmental Affairs Cecilia Munoz to the right of then Chief of Staff Rahm Emanuel.(Official White House Photo by Pete Souza)

As we kick-off Hispanic Heritage Month this week, we’d be remiss to not look within the walls of the White House at the many talented and impressive Latinas serving the President and the American people.  They come from many backgrounds and work across many fields, but they all have one thing in common – an inspiring commitment and dedication to giving back to the community and to strengthening our nation through their many talents.

Take a moment and learn more about some of these highly accomplished women, including the highest ranking Latina in the White House, Cecilia Muñoz, Deputy Assistant to the President and Director of Intergovernmental Affairs. In today’s post we also feature Nancy Sutley, Chair of the White House Council on Environmental Quality; Teresa Chaurand, Special Assistant to the President for Presidential Personnel; Victoria Espinel, Intellectual Property Enforcement Coordinator; Stephanie Valencia, Deputy Director of the Office of Public Engagement; Felicia Escobar, Senior Policy Advisor for Immigration at the Domestic Policy Council; and Alejandra Campoverdi, Deputy Director of Hispanic Media.

Cecilia Muñoz serves as Deputy Assistant to the President and Director of Intergovernmental Affairs where she oversees the Obama Administration’s relationships with state and local governments, as well as the governments of tribes and territories.  Prior to joining the Obama Administration, Cecilia served as Senior Vice President for the Office of Research, Advocacy, and Legislation at the National Council of La Raza (NCLR), the nation’s largest Latino civil rights organization. She supervised NCLR’s policy staff covering a variety of issues of importance to Latinos, including civil rights, employment, poverty, farmworker issues, education, health, housing and immigration. Her particular area of expertise is immigration policy, which she covered at NCLR for twenty years. Ms. Muñoz is the daughter of immigrants from Bolivia and was born in Detroit, Michigan. She received her undergraduate degree from the University of Michigan in Ann Arbor and her master’s degree from the University of California at Berkeley. In June 2000, she was awarded a MacArthur Foundation fellowship in recognition of her work on immigration and civil rights. In 2007, she served as the Towsley Foundation Policymaker in Residence at the Gerald R. Ford School of Public Policy at the University of Michigan. She has received numerous other awards and recognitions from various sources, including the Congressional Black Caucus Foundation, and a variety of local non-profit organizations.

Nancy Sutley is the Chair of the White House Council on Environmental Quality (CEQ). In her role as Chair, she serves as the principal environmental policy adviser to the President. Prior to her appointment, Sutley was the Deputy Mayor for Energy and Environment for the city of Los Angeles, California. She represented Los Angeles on the Board of Directors for the Metropolitan Water District of Southern California and served on the California State Water Resources Control Board from 2003- 2005. Sutley also worked for California Governor Gray Davis as Energy Advisor, managing state and federal regulations, legislative affairs, finances and press relations. She served as Deputy Secretary for policy and intergovernmental relations in the California EPA from 1999-2003. She advised on water and air pollution policy, and established budget and legislative priorities. During the administration of President William J. Clinton, Sutley worked for the EPA as a Senior Policy Advisor to the Regional Administrator in San Francisco and special assistant to the Administrator in Washington, D.C.  Sutley received her Bachelors degree from Cornell University and her Master in Public Policy from Harvard University.

Teresa Chaurand serves as Special Assistant to the President in the Office of White House Presidential Personnel. She leads the Priority Placement Team which manages Presidential Personnel's relationships with various constituencies, including the Hispanic community.  Before joining the Obama Administration, Teresa served as the owner and Senior Partner of Vista Communications. Her clients included the National Council of La Raza, the Hispanic Association on Corporate Responsibility, the Black and Veatch Corporation, the state of Missouri, the Missouri Department of Tourism, the City of Kansas City, Missouri, EITAS – Developmental Disability Services of Jackson County, Missouri, the Kansas City Royals and Kansas City Chiefs. Her expertise is in the area of government and community relations, stakeholder involvement, marketing and talent recruitment. Prior to owning her business, Teresa served as sales manager and account representative for three top rated radio stations in Kansas City and Washington, D.C.  and was also a producer for talk radio programs in Kansas City. She holds a B.A. in Mass Communications from the University of Missouri-Kansas City.

Victoria A. Espinel serves in the Executive Office of the President as the first ever U.S. Intellectual Property Enforcement Coordinator. She was nominated by President Barack Obama to serve as the Intellectual Property Enforcement Coordinator in September 2009 and was confirmed by the Senate in December 2009. Ms. Espinel is charged with developing and implementing the Administration’s overall strategy for enforcement of intellectual property. Prior to her appointment, Ms. Espinel was a professor at the George Mason University School of Law, teaching intellectual property and international trade law. While at George Mason, she acted as an advisor on intellectual property issues to the staff of the Senate Judiciary Committee, Senate Finance Committee, House Judiciary Committee and House Ways and Means Committee. In 2009, Ms. Espinel founded Bridging the Innovation Divide, a not-for-profit foundation focused on addressing the "innovation divide" and empowering all Americans to obtain the full benefit of their creativity and ingenuity. In 2001, Ms. Espinel joined the Office of the US Trade Representative as the senior counsel for intellectual property issues. In 2005, Ms. Espinel was asked to serve as the first Assistant United States Trade Representative for Intellectual Property and Innovation at the Office of the U.S. Trade Representative, creating the office of Intellectual Property and Innovation at USTR and serving as the chief U.S. trade negotiator for intellectual property and innovation. While at USTR, she testified on numerous occasions before the House Judiciary Committee and the Senate Committee on Homeland Security and Governmental Affairs. Ms. Espinel holds an LLM from the London School of Economics, a JD from Georgetown University Law School and a BS in Foreign Service from Georgetown University's School of Foreign Service. 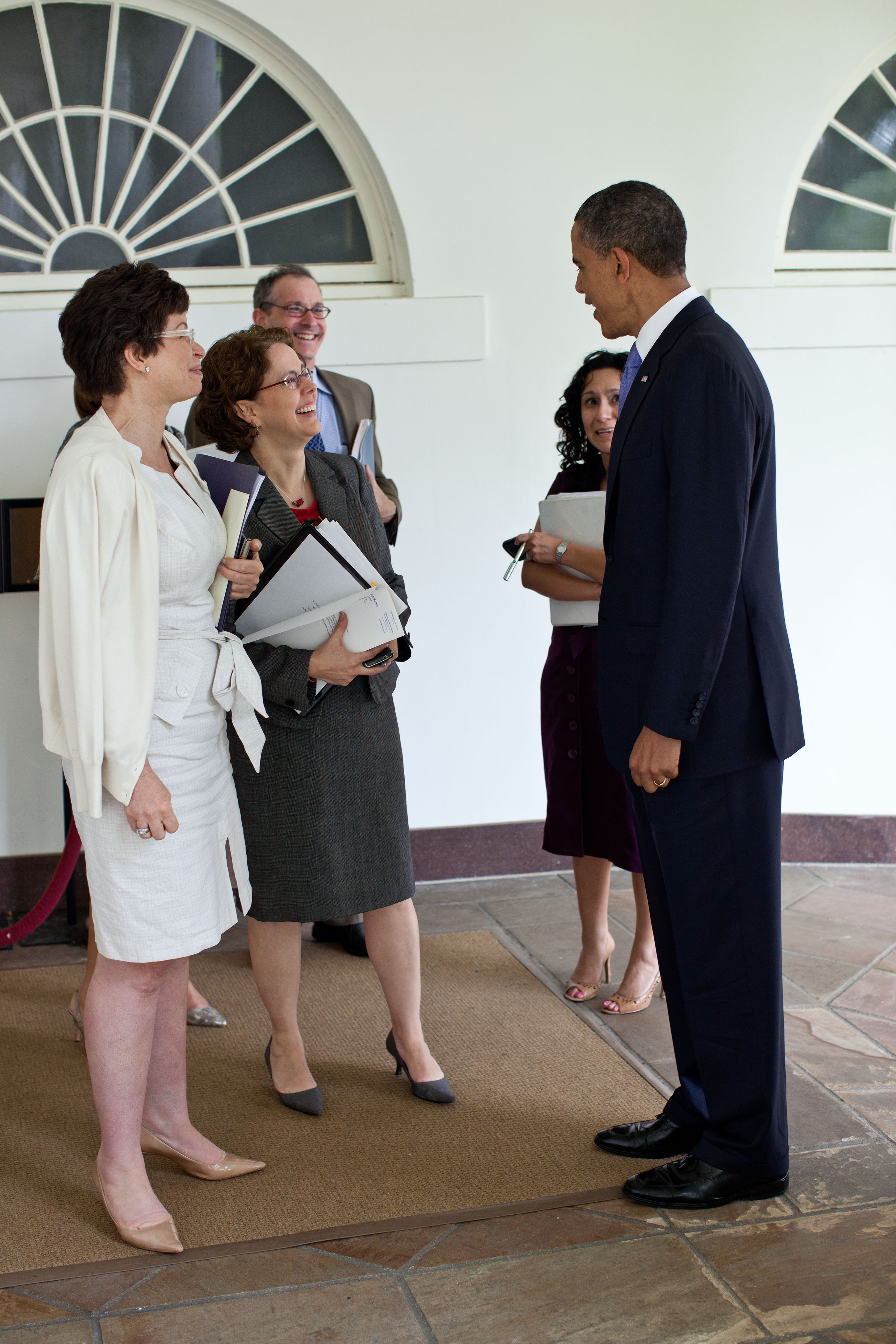 Stephanie Valencia is Deputy Director of the White House Office of Public Engagement.  Stephanie joined the White House in January 2009 and has led the Administration’s outreach to the Latino community, as well as to diverse communities on immigration and housing issues. Prior to joining the Administration Stephanie served on the Obama-Biden Presidential Transition Team and was Deputy Latino Vote Director on the Obama Campaign.  Stephanie also served as Press Secretary to United States Senator Ken Salazar (D-CO), serving as his spokeswoman and media advisor. Stephanie also worked in the House of Representatives as Special Assistant and Press Secretary to the Vice Chair of the Democratic Caucus, Congressman John B. Larson from Connecticut, and served as Press Secretary to Congresswoman Linda Sanchez. Stephanie started her career as a Congressional Hispanic Caucus Institute Fellow and is a graduate of Boston College. She is originally from Las Cruces, New Mexico and she and her husband Oscar Ramirez reside in Silver Spring.

Felicia Escobar is Senior Policy Advisor for Immigration at the White House Domestic Policy Council.  In this role, Felicia develops the President’s strategy for building a 21st century immigration system. This work involves coordinating efforts across the Executive branch to strengthen the current system and working toward passage of meaningful, comprehensive immigration reform legislation. Felicia previously served on U.S. Senator Ken Salazar’s legislative team, working with him to develop his legislative agenda on a host of issues including labor, civil rights, judicial nominations and immigration. Felicia advised Senator Salazar during the comprehensive immigration reform debates of 2006 and 2007 in which Senator Salazar was a key member of the bipartisan group pressing for reform. Prior to this, Felicia was Associate Director of the Senate Democratic Steering and Outreach Committee. In this role, Felicia helped cultivate relationships between Democratic Leader Tom Daschle and key stakeholder groups, including Latino, immigration and education advocacy groups. Felicia started her career as a State Policy Analyst working for the National Council of La Raza. She represented NCLR and its network of affiliates in the Texas State Legislature, testifying before legislative committees to advocate for education, immigrant access to benefits, and hate crimes legislation. Felicia is a native of San Antonio, TX.  She received an undergraduate degree from Yale University, a Masters in Public Policy from the Harvard Kennedy School of Government and her J.D. from UCLA School of Law.

Alejandra Campoverdi is Deputy Director of Hispanic Media at the White House where she implements the White House’s historic efforts to engage Hispanic media nationally, working to promote the President’s agenda on television, radio, and internet-based outlets across the country. Prior to her current position, she was Special Assistant to former White House Deputy Chief of Staff for Policy Mona Sutphen. Alejandra joined Obama for America upon earning her Masters in Public Policy from the Harvard Kennedy School of Government, where she was Senior Editor of Interviews for the Harvard Journal of Hispanic Policy. She was previously at The California Endowment (TCE), a private statewide health foundation whose mission is to expand access to healthcare for underserved communities. While at TCE, Alejandra worked on the Agricultural Worker Health Initiative, which focused on the development and implementation of programs and strategies to improve the health and living conditions of California’s agricultural workers and their families, as well as grantmaking to underserved communities in Central and Northern California. A Los Angeles native, Alejandra graduated cum laude from the University of Southern California, with a B.A. in Communications from the Annenberg School for Communication & Journalism.

Zulima Espinel serves as Special Assistant to the President and Associate Counsel. Ms. Espinel was appointed by President Obama to that post in April 2010.  Prior to joining the White House Counsel’s Office, Ms. Espinel worked for the United States Senate Committee on the Judiciary, serving as Senior Counsel for National Security from 2009-2010 and as Counsel from 2007-2009.  Ms. Espinel was an Assistant United States Attorney for the District of Columbia from 2003-2007.  Ms. Espinel received her Juris Doctor from Georgetown University Law Center in 2001. She graduated with honors from Barnard College in 1998.