President Obama to the U.N. General Assembly: "Peace Is Hard, but We Know that It Is Possible"

September 21, 2011 at 12:45 PM ET by
Twitter Facebook Email
Summary:
This has been a difficult decade, but we stand at a crossroads of history with the chance to move decisively in the direction of peace.

Today President Obama struck a hopeful note in his address to the United Nations General Assembly on overcoming the numerous challenges that stand in the way of a lasting peace. He advocated for peace defined by more than the absence of war, saying: “a lasting peace -- for nations and for individuals -- depends on a sense of justice and opportunity, of dignity and freedom.”

The President reminded the General Assembly of the progress the United States has made towards a new direction of peace:

The tide of war is receding. When I took office, roughly 180,000 Americans were serving in Iraq and Afghanistan. By the end of this year, that number will be cut in half, and it will continue to decline. This is critical for the sovereignty of Iraq and Afghanistan. It’s also critical to the strength of the United States as we build our nation at home.

Moreover, we are poised to end these wars from a position of strength. Ten years ago, there was an open wound and twisted steel, a broken heart in the center of this city. Today, as a new tower is rising at Ground Zero, it symbolizes New York’s renewal, even as al Qaeda is under more pressure than ever before. Its leadership has been degraded. And Osama bin Laden, a man who murdered thousands of people from dozens of countries, will never endanger the peace of the world again.

So, yes, this has been a difficult decade. But today, we stand at a crossroads of history with the chance to move decisively in the direction of peace.  To do so, we must return to the wisdom of those who created this institution. The United Nations’ Founding Charter calls upon us, “to unite our strength to maintain international peace and security.”  And Article 1 of this General Assembly’s Universal Declaration of Human Rights reminds us that, “All human beings are born free and equal in dignity and in rights.” Those bedrock beliefs -- in the responsibility of states, and the rights of men and women -- must be our guide.

And in that effort, we have reason to hope. This year has been a time of extraordinary transformation.  More nations have stepped forward to maintain international peace and security. And more individuals are claiming their universal right to live in freedom and dignity.

The President also addressed the conflict between the Israelis and the Palestinians:

One year ago, I stood at this podium and I called for an independent Palestine. I believed then, and I believe now, that the Palestinian people deserve a state of their own. But what I also said is that a genuine peace can only be realized between the Israelis and the Palestinians themselves. 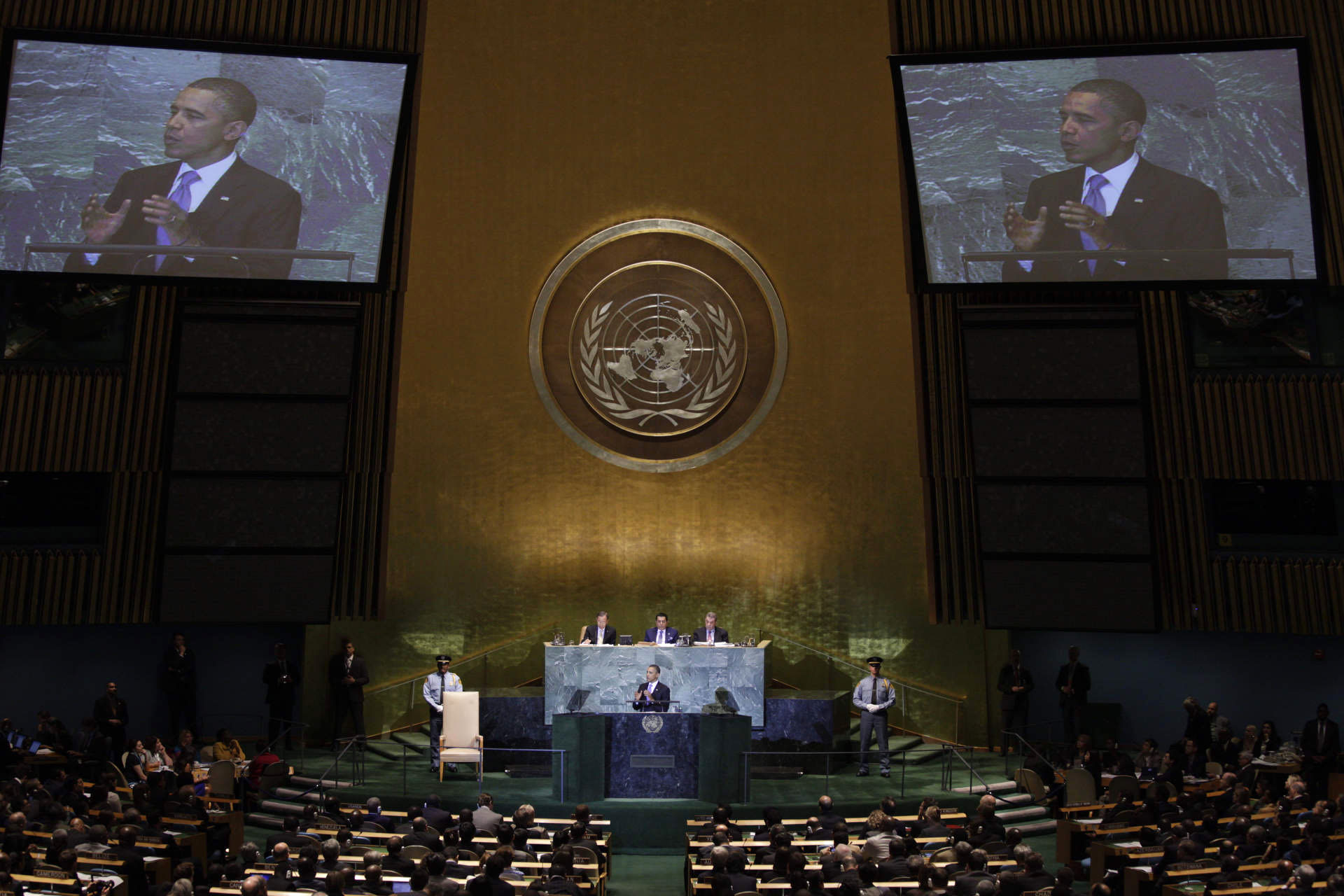 The President closed his speech by affirming the United States' dedication to partnering with the United Nations to continue finding new paths to peace:

I know there’s no straight line to that progress, no single path to success. We come from different cultures, and carry with us different histories. But let us never forget that even as we gather here as heads of different governments, we represent citizens who share the same basic aspirations -- to live with dignity and freedom; to get an education and pursue opportunity; to love our families, and love and worship our God; to live in the kind of peace that makes life worth living.

It is the nature of our imperfect world that we are forced to learn these lessons over and over again.  Conflict and repression will endure so long as some people refuse to do unto others as we would have them do unto us.  Yet that is precisely why we have built institutions like this -- to bind our fates together, to help us recognize ourselves in each other -- because those who came before us believed that peace is preferable to war, and freedom is preferable to suppression, and prosperity is preferable to poverty. That’s the message that comes not from capitals, but from citizens, from our people.

And when the cornerstone of this very building was put in place, President Truman came here to New York and said, “The United Nations is essentially an expression of the moral nature of man’s aspirations.” The moral nature of man’s aspirations.  As we live in a world that is changing at a breathtaking pace, that’s a lesson that we must never forget.

Peace is hard, but we know that it is possible. So, together, let us be resolved to see that it is defined by our hopes and not by our fears. Together, let us make peace, but a peace, most importantly, that will last.