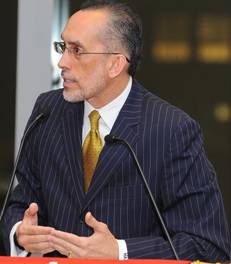 The U.S. Department of Commerce’s mission is to help make American businesses be more innovative at home and more competitive abroad, so they can create jobs here in the United States. And while that mission is clearly focused, the diversity of issues that Commerce tackles are wide ranging.  It is, like the Latino community in the United States, very eclectic.

The U.S. Department of Commerce has a broad mandate to advance economic growth, jobs and opportunities for the American people. It has cross-cutting responsibilities in the areas of trade, technology, entrepreneurship, economic development, environmental stewardship, tourism and statistical research and analysis. The products and services the Department provides touch the daily lives of Americans and American companies in many ways, including weather forecasts, the decennial census, and patent and trademark protection for inventors and businesses.

Developing commerce to provide new opportunities has been the Department’s goal since its beginning in 1903, and it remains a primary obligation today.  And with approximately 47,000 employees worldwide, the Department and its 12 bureaus does that work here at home and across the globe.

It is this diversity of issues that makes the Department of Commerce such an interesting and challenging place to work, and as the Secretary’s Director of Intergovernmental Affairs, it is my role to promote President Obama’s policies, programs and initiatives with state and local elected officials across the 50 states and territories as it relates to the 12 bureaus within the department, to include the American Jobs Act.

Having grown up in such an international city as Miami, Florida, I had the opportunity to work and learn within an environment where Latino participation was very strong in business, the media, government, education and non-profit work.  As the son of a retired chef and elementary school cafeteria worker, both of whom were community activists; my parents instilled in me a passion for community service, social and racial justice, and the empowerment of the Latino community and communities of color that spans a twenty-five plus year professional career.  Whether it was helping develop leadership through education among Latino youth; serving as a board member for a senior center and a housing and economic development non-profit; or advocating for Latinos to fully participate in the American political process as it relates to immigration, naturalization, being counted in the Census, and voting rights protection – it has always been important to me that all voices are heard and are part of the decision making process on the issues that affect our community and our nation.

It is the cross section of my life-long professional advocacy and my role at Commerce that made one my duties working with state and local elected officials across the country, one of the most important and fulfilling ones; the 2010 Decennial Census. The 2010 Decennial Census was the largest peace time mobilization in our country’s history. The U.S. Census is one of the most basic forms of civic participation in our country and it is mandated by Article I, Section 2 of the Constitution and takes place every 10 years. It is a snapshot of our country, and just like it is important to have every member of our family in the wedding, quinceañera or baptism pictures, it is just as important that everyone in the diverse mosaic of the United States be part of that snapshot as well.  The data collected by the decennial census determine the number of seats each state has in the U.S. House of Representatives and is also used to distribute billions in federal funds to local communities.

As a Puerto Rican-American in the Obama administration, it is an honor to serve a President that values the richness and diversity of our country; and as exhibited by the 2010 Census, the picture of this country is as diverse and eclectic as the department that I am so proud to work in.  And at Commerce, we count on Americans of Latino descent and heritage to help make American businesses be more innovative at home and more competitive abroad, so they can create jobs here in the United States for everyone.

William Ramos is the  Director of Intergovernmental Affairs for the U.S. Department of Commerce Secretary