President Obama: "Our Kids Only Get One Shot at a Decent Education"

September 23, 2011 at 3:05 PM ET by
Twitter Facebook Email
Summary:
Today the President announced that the administration will enable states to request flexibility from specific mandates under No Child Left Behind, in exchange for a real commitment to undertake education reform

President Obama today gathered representatives from the education community to announce that it’s time to take action and build a world class education system. The United States is 16th in the proportion of young people with a college degree, in a world where 60% of new jobs will require more than a high school diploma. Our students are being outperformed by their peers around the globe. A quarter of American students aren’t finishing high school. As the President said today in the East Room, we have to improve our schools if we want to rebuild our economy:

And what this means is if we’re serious about building an economy that lasts –- an economy in which hard work pays off with the opportunity for solid middle-class jobs -– we’ve got to get serious about education.  We are going to have to pick up our games and raise our standards.

Watch President Obama on No Child Left Behind Flexibilty, here.

Improving our education means giving our kids the resources they need to learn. That’s why the American Jobs Act would put thousands of teachers back to work all across the country, and modernize at least 35,000 schools. But money alone won’t solve our education problems. As the President said today, creating standards can’t be a top down process created in Washington:

That’s why instead of just pouring money into the system that’s not working, we launched a competition called Race to the Top. And to all 50 states -- to governors, to schools districts -- we said, show us the most innovative plans to improve teacher quality and student achievement; we’ll show you the money. We want to provide you more resources, but there’s also got to be a commitment on your part to make the changes that are necessary so that we can see actual results.

And, by the way, these standards that we’re talking about -- these high standards that we’re talking about were not developed here in Washington. They were developed by Republican and Democratic governors throughout the country --  essentially as a peer group, a peer review system where everybody traded best practices and said, here’s what seems to work, and let’s hold all of our schools to these high standards. And since that Race to the Top has been launched, we’ve seen what’s possible when reform isn’t just a top-down mandate but the work of local teachers and principals and school boards and communities working together to develop better standards. 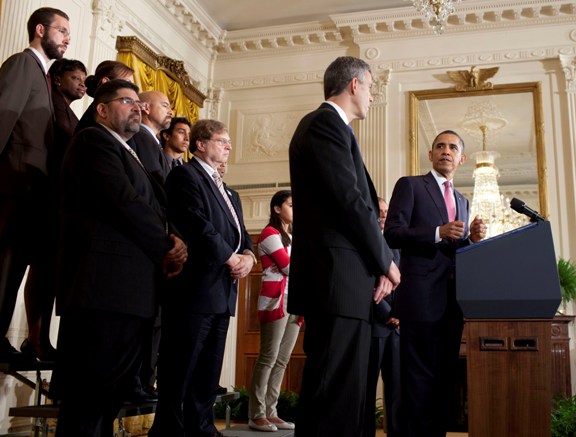 President Barack Obama looks towards Education Secretary Arne Duncan during remarks on the need to provide states with relief from key provisions of the No Child Left Behind Act, in the East Room of the White House, Sept. 23, 2011. (Official White House Photo by Chuck Kennedy)

While President Obama lauds the intention and goals that led to establishing No Child Left Behind, its implementation had serious flaws that are hurting our children instead of helping:

The President knows that our children can’t wait any longer for reform:

These problems have been obvious to parents and educators all over the country for years now. I’ve urged Congress for a while now, let’s get a bipartisan effort, let’s fix this. Congress hasn’t been able to do it.  So I will. Our kids only get one shot at a decent education. They cannot afford to wait any longer. So, given that Congress cannot act, I am acting.

Starting today, the Administration will enable states to request flexibility from specific mandates under No Child Left Behind, in exchange for a real commitment to undertake education reform. This does not mean states will be able to lower their standards or escape accountability. In fact, if states want more flexibility, they’re going to have to set a higher bar for reform and prove that they’re serious about preparing students to succeed in today’s economy.

As the President said today, this new flexibility will allow states to “come up with innovative ways to give our children the skills they need to compete for the jobs of the future” so that people like Ricky Hall, a principal of a charter school in Worcester, Massachusetts that sent every single student to college in the last three years and is ranked in the top quarter of Massachusetts schools, won’t be classified as “failing” for not meeting all the technical standards of No Child Left Behind.

So this isn’t just the right thing to do for our kids -– it’s the right thing to do for our country. We can’t afford to wait for an education system that is not doing everything it needs to do for our kids. We can’t let another generation of young people fall behind because we didn’t have the courage to recognize what doesn’t work, admit it, and replace it with something that does.  We’ve got to act now. We’ve got to act now and harness all the good ideas coming out of our states, out of our schools. We can't be tied up with ideology. We can't be worrying about partisanship. We just have to make sure that we figure out what works, and we hold ourselves to those high standards. Because now is the time to give our children the skills that they need to compete in this global economy.

We’ve got a couple of students up on stage who are doing outstanding work because somebody in their schools is dedicated and committed every single day to making sure that they’ve got a chance to succeed.  But I don't want them to be the exception.  I want them to be the rule.  Now is the time to make our education system the best in the world, the envy of the world. 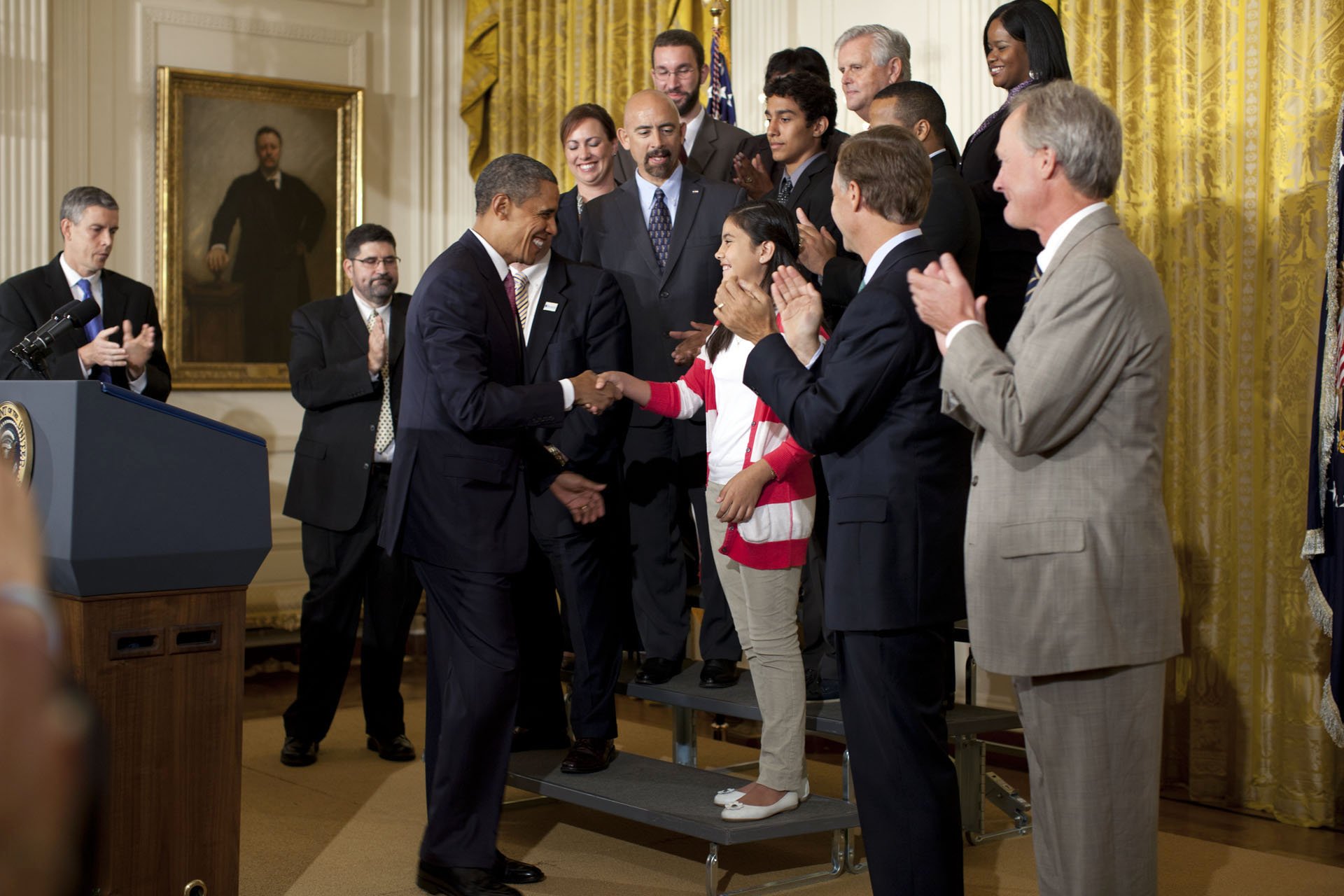 President Barack Obama greets Keiry Herrera, a sixth grade student at Graham Road Elementary School in Fairfax, Va., following remarks on the need to provide states with relief from key provisions of the No Child Left Behind Act, in the East Room of the White House, Sept. 23, 2011. (Official White House Photo by Pete Souza)