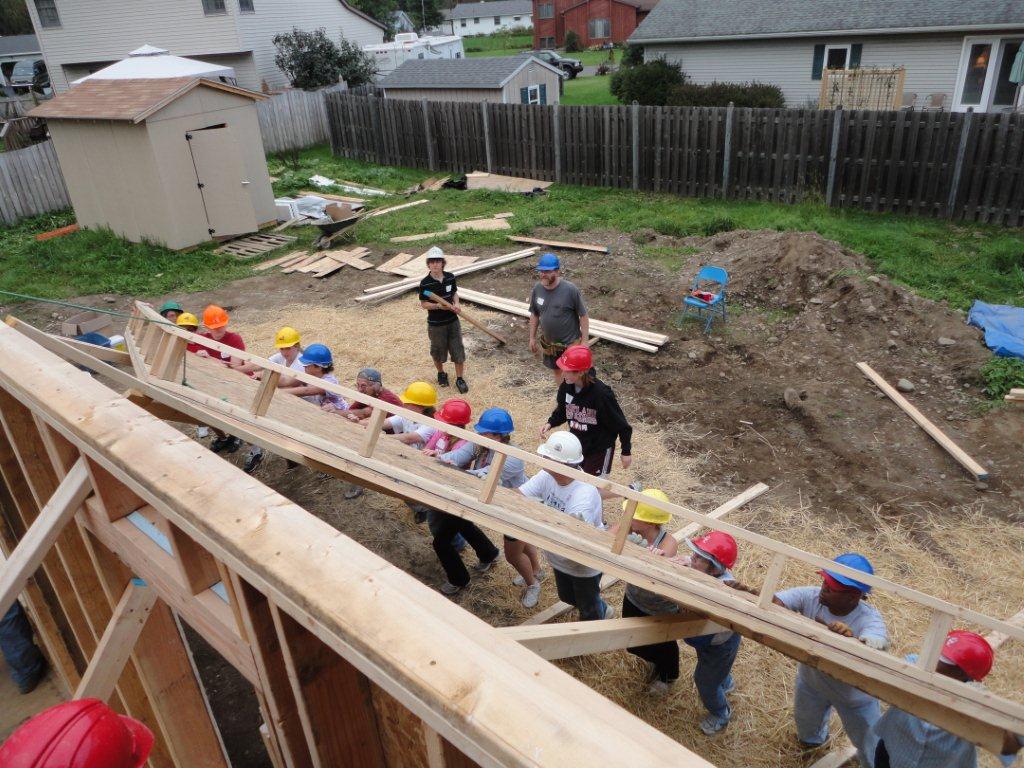 SUNY-Cortland students and staff work with Cortland community members to lift an end gable off the ground.

Amidst the vigils, prayer services, and moments of silence commemorating 9/11, many Americans honored the fallen by serving their communities. In conjunction with the National Day of Service on September 11th, a number of colleges and universities nationwide chose to launch their year-long plans for the President’s Interfaith and Community Service Campus Challenge.

President Obama issued the Campus Challenge in spring 2011 out of his conviction that hands helping together build strong bonds between people of different backgrounds. Students and staff at colleges, universities, and theological schools answered the call this summer by designing their plans to better the community this year. Rather than focusing on doctrinal differences, these students of different faiths planned to work together in service, a comfortable setting for positive conversations about their identity, beliefs, and traditions.

The poignant anniversary of 9/11 prompted many Campus Challenge participants to create such positive spaces. At Rhodes College in Memphis, TN, participants in the “Artistic Board Up” project remembered “a day of destruction” with “a day of construction,” according to Rev. Walt Tennyson, Rhodes College Chaplain and Director of the Bonner Center for Faith and Service. Muslim, Jewish, and Christian students joined staff from the City of Memphis to board up abandoned homes and spruce up their yards in a neighborhood near the college. One Muslim resident was especially excited to find Muslim students working on his street, since he does not live near anyone of his faith tradition. After the resident expressed his difficulty getting to religious services, the students volunteered to transport him in the future. Rhodes students will continue to build the sustainability of the neighborhood this year through the Campus Challenge.

Students from the State University of New York at Cortland also did their heavy lifting during the 9/11 weekend, reflecting frequently on New York City, which many of them call home. SUNY-Cortland’s Faith Build Blitz, co-hosted by the Cortland County Council of Churches and Cortland Habitat for Humanity, was designed to grow the campus-community relationship by bringing people of different faiths and no faith together for the weekend’s work. More than 100 people, about half of whom came from the local community, applied their skills and on-the-job training to add walls and end gables to a Habitat home. At the campus’s 9/11 commemoration on Sunday night, Rev. Vicki Johnson, SUNY-Cortland Protestant Chaplain and Executive Director of the Council of Churches, gave students the choice between dwelling passively on the past and deciding to do something for a better future.  More than 60 students answered her call that evening by signing onto one of a number of Cortland service organizations.

We look forward to more stories this year of students stepping up to the President’s Interfaith and Community Service Campus Challenge.

John Kelly is Senior Policy Advisor of the White House Office of Faith-based and Neighborhood Partnerships.